Never have to turn back a few minutes into a long trip again. StoveTec will notify you if your stove or oven is on when you leave the house.

Never have to turn back a few minutes into a long trip again. StoveTec will notify you if your stove or oven is on when you leave the house. 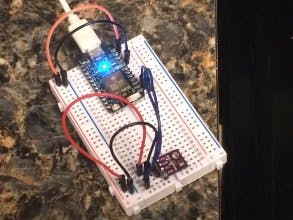 StoveTec is a system that will monitor the temperature of your stove and react to that information based on the owner’s whereabouts. Utilizing IFTTT you can easily construct a geofence around your residence. Upon exiting this geofence IFTTT will call a function on the photon which checks the status of the stove. If it is above a certain threshold by the time you exit this geofence, a notification will be sent to your phone advising you to turn around and turn off the stove.

The National Fire Protection Association (NFPA) says there are more than 360,000 home structure fires each year, resulting in about $6-8 billion dollars in damage. Many house fires are caused by unattended cooking or neglecting to turn off kitchen appliances. It is the hope of the creators that this product will help to reduce home fires and give homeowners added peace of mind.

This setup starts with a pair of Particle Photons that are each connected to a BME 280 temperature sensor and place around the stove to accurately measure all of the heating elements. Here is a picture of the Particle Photon with the necessary circuitry.

A powered Photon attached to a BME/BMP 280 Pressure Temperature Sensor
Sensors are placed around the entire stove top in order to ensure accuracy.

We made sure to place the sensors at multiple locations around the stove in order to ensure accuracy. Be sure to label each Photon so you don't loose track of which is which. We did that alot.

Circuit Diagram for hooking up your sensors to the particle

Both Particle Photons monitor the ambient temperature around the stove constantly. New values for these variables are published every ten seconds. In addition, every new value is compared to a threshold temperature dictated in the code. As the apartment we tested in rests in the low 70's most of the year, we chose a threshold value of 78 F. Based on this comparison each Particle Photon publishes its status as a 1 for on and a 0 for off. Photon 1 catches the data published by Photon 2 using a Particle.subscribe function.

Using IFTTT we constructed a geofence around the apartment at which we were testing. When the user exits this geofence the "checkStove" function is called on Photon 1. If the last updated data from either Photon corresponds to on, a separate applet from IFTTT that is monitoring this functions result will send the user a notification advising them to turn around a turn off their stove.

In order to test our setup we did the only responsible thing we could do: we turned on the stove and left the apartment. (Shout out to my roommate Steve for agreeing to hold down the fort) We performed multiple tests to gauge the response times we could expect; these generally varied from 1-2 minutes, with the longest response time taking 2 minutes and 35 seconds.

The code we have provided should make replicating this setup a simple "copy paste job". Simply copy and paste it into the IDE accessible from particle.io. Just be sure to include the libraries specified in the code and change the access token for the Particle.subscribe function to match the access token of your own particle.

If you are so inclined as to spy on your roommate's cooking habits we have included code that will allow you to easily create a web hook in the particle.io console allowing Thingspeak to monitor the temperature read by the sensor connected to Photon 1. Just create your web hook to catch the event name published by the particle in the code. There are some handy step by step instructions at this link:

If you are so inclined as to spy on MY roommate's cooking habits here is the link to the Thingspeak graph for our Photon 1 in all its glory. We make no promises as to whether or not the Photon is still publishing and collecting data but wondering what or why we might be cooking at 3:15 AM is always good for a laugh.

Although this was designed as a safety apparatus, with minor changes to the code additional sensors could be added to this system to remind owners to turn down the AC before going to work or on a long vacation, or monitor any other temperature variable within the home. 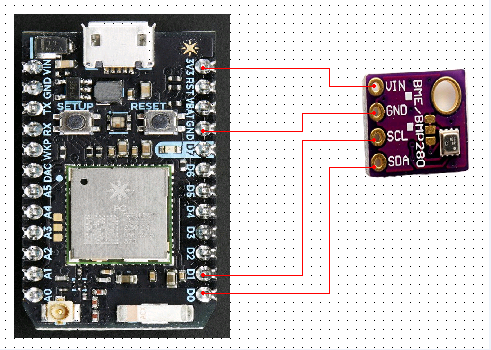 1 project • 1 follower
ContactContact
Thanks to John McAlpine and My roommate Steve.