Using a Photon in a custom enclosure, we are testing the frustration levels of peoples paying money to play a game that has a delayed start.

Using a Photon in a custom enclosure, we are testing the frustration levels of peoples paying money to play a game that has a delayed start. 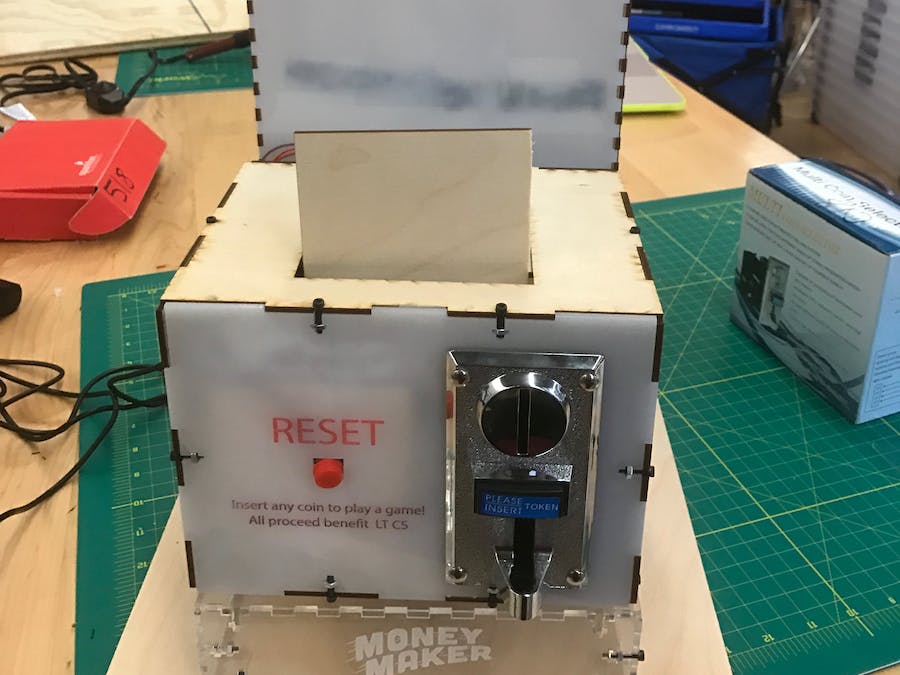 This project tests the frustration levels of Lane Tech students. The students will insert a coin to play our marble maze game, but when the game stalls out, how will they react? Will they frantically push the dud reset button?

Our goal was to build a Plinko-like marble game that would stall out after a player inserted a coin. After 10 seconds the game would continue as usual. However, we wanted to see how frustrated Lane students would get while waiting, and whether they would wait at all.

After a quick prototype we started to design our case files. We wanted it to be compact and easy to interact with. To accomplish this, we simply had one button and an input for the coin in the final design.

We used MakerCase to create our main box, which 8"x6"x6" and housed our button, leds, servo, the coin acceptor and our photon. It was mainly wood except for the frosted acrylic front. We chose to do this so that we could hide the interior of the box but still have leds visible from the outside.

Another box (8"x6"x2") deemed the "Money Maker" was made from clear acrylic and placed under our main box to collect coins that players inserted into our coin acceptor.

Last, a third box was made to house the maze, constructed of wood except for a frosted acrylic front, which originally was planned to be clear. 1"x2" pieces of wood were glued to the back of our maze to create "slots" for the ball to travel down to (similar to Plinko). A flex sensor was placed at the bottom of the "victory path" which was meant to detect the ball passing through and trigger leds to indicate the player won. Unfortunately the ball would sometimes get stuck on the flex sensor so it did not always accurately represent our data.

The code was a combination of different individual smaller projects, using each sensor independently. Since most of the examples we used were not written for Photon, we had to make adjustments to syntax and other database references. In the end, the code barely gave us any issues and worked as intended.

The primary challenges we encountered were with the construction and wiring of our project. There were many problems with powering our project, especially the coin acceptor, which needed a separate 12V power supply and was extremely finicky during initial testing stages. Also, our servo had a difficult time lifting the trap door due to inadequate power due to the limited 3.3V output of the Photon, which was dispersed amongst all of our other components on the breadboard. We ended up including a separate 5V outside battery to solve this issue

Our team learned about the importance of wiring and soldering properly, since many of issues were caused due to faulty connections. Also, we learned that such an ambitious project deserved more planning than we anticipated, which became clear to us when our project's deadline approached.

In the end, our project functioned successfully. It took longer than anticipated, but needed modifications to the original design were made along the way. 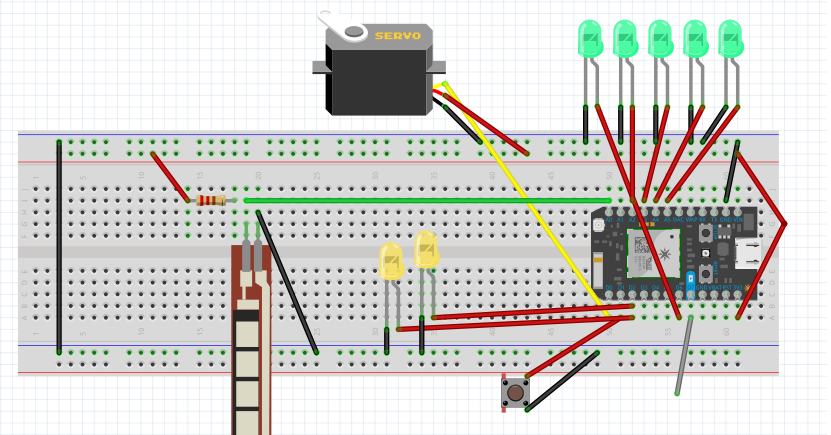