This project uses two argons to turn on an LED light when a water level sensor senses water in a cup.

Measuring Whether There is Water in a Cup

Measuring Whether There is Water in a Cup

This project uses two argons to turn on an LED light when a water level sensor senses water in a cup. 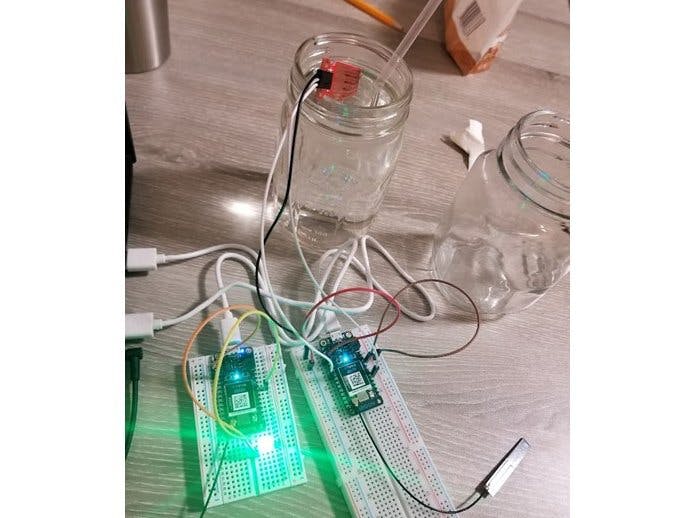 Over the course of six weeks we have worked to develop a project that will activate an LED light when there is water in a cup. To accomplish this task, we used a water level sensor connected to an argon that communicates with a second argon to signal the LED to turn on. As this is both of our first times using argons, we have had to deal with many difficulties during our time working on the project. Finding creative solutions to these difficulties helped us to transform our project from our original plan, to the water level LED signal that it is now.

Our first plan was to create a project that would measure the temperature of water, and signal a fan to activate if the water was too hot. We would have used a handheld fan in this version of the project. However, after we discussed the difficulties we would run into dismantling the handheld fan, and the possibility of a handheld fan not being the most effective way to cool down hot liquid, we decided to adjust our idea. Instead of attempting to cool down a liquid, we would keep a mug of liquid warm.

Instead of measuring temperature, we would measure water level. We had a water level sensor in one of our sensor kits, and we had a better understanding of how to code for a water level sensor than for a temperature sensor. We planned to use the water level sensor to signal a buzzer to go off when the water rose above a certain level. Our problem with this came with the code. Neither of us have any prior experience coding for an argon, and neither of us have much experience with coding in general. We could not get the code to work for the buzzer, so we attempted to use a LED instead. This code did work, and we were successful in getting the LED to turn on.

This is how we ended up with our final project; using a water level sensor to turn on an LED light in the presence of water. Even though neither of us have much experience with argons or with coding, we were able to use research to create a plan that we could accomplish with our level of knowledge. Through this project we learned more about sensors, argons, coding, and circuits. In particular, we learned how to make two Particle Argons communicate with each other. This new knowledge helped us to complete our project, and we hope that we will be able to use and develop this knowledge in many projects to come.

Our project was designed so that when the water level sensor detects water, the LED light will be on. When there is no water present the LED will be off. The photos below display these two outcomes.

Diagram Showing the Communication Between Both Argons