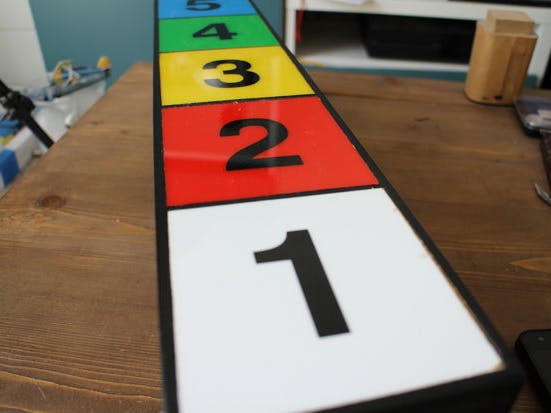 After watching the old but amazing film WarGames I decided to try and build one of the defcon signs featured in it. Two types of sign appear in the film, a large horizontal one which hangs in the main control room and a smaller vertical sign in an office. This vertical type also appears in at least one Stargate SG1 episode and is the one I decided to replicate.

I toyed with the idea of trying to make a screen perfect copy but I decided to opt for building a simpler less perfect version making use of scrap materials I had.

To add an interesting twist I made use of the MI5 security threat level so it displays real data, although this means I am unlikely to ever get to see what the blue and green (or yellow) lights look like!

The frame was made from scrap wood, the whole thing is 10cm x 50cm x 10cm which I think roughly matches the one from the film.

The wood is glued and nailed together, there is a rebate cut into one side for the acrylic to sit into.

The wood was previously painted white which I kept for the inside surface, this won't be seen but will aid with the reflection of the light.

The exterior of the frame was filled, sanded and spray painted to give it a clean matt black look.

The panels are 5 coloured pieces of 3mm acrylic, these are approximately 10cm by 10cm.

Using a vinyl cutter I cut out the numbers 1 to 5 in Helvetica (I think thats the right font) and stuck these to the acrylic. Its amazing how more complete something like this feels when the numbers go on.

The sign from the film would have used incandescent bulbs but to simplify the build I chose LED's with built in drivers.

The light uses WS2812 Neopixel leds for illumination, I opted for these as they were easy to interface with and control and it meant I didn't need to add any additional driver hardware.

The LEDs were cut into strips of 4 and I placed 3 strips in each one, all of them connected in series and to one pin on the microcontroller.

To control the light I opted to use a Particle Photon, this was connected to the lights through one data pin and powered by the USB interface.

The software uses the Particle API to query the MI5 RSS feed which contains the latest UK threat level. The software then translates the critical, severe, substantial, moderate, and low levels into 1 to 5 for the display.

The software is written for the photon and makes use of their webhooks to operate so it wont be possible to use this on another platform.

This build turned out an awful lot better than I was expecting, I am really happy with the impact and look of the final thing and super pleased about the MI5 threat level integration. 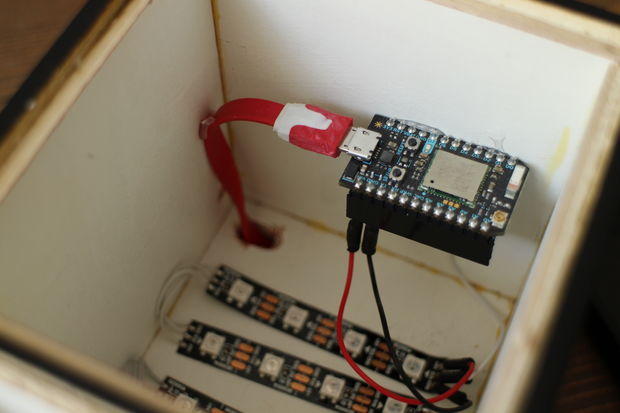