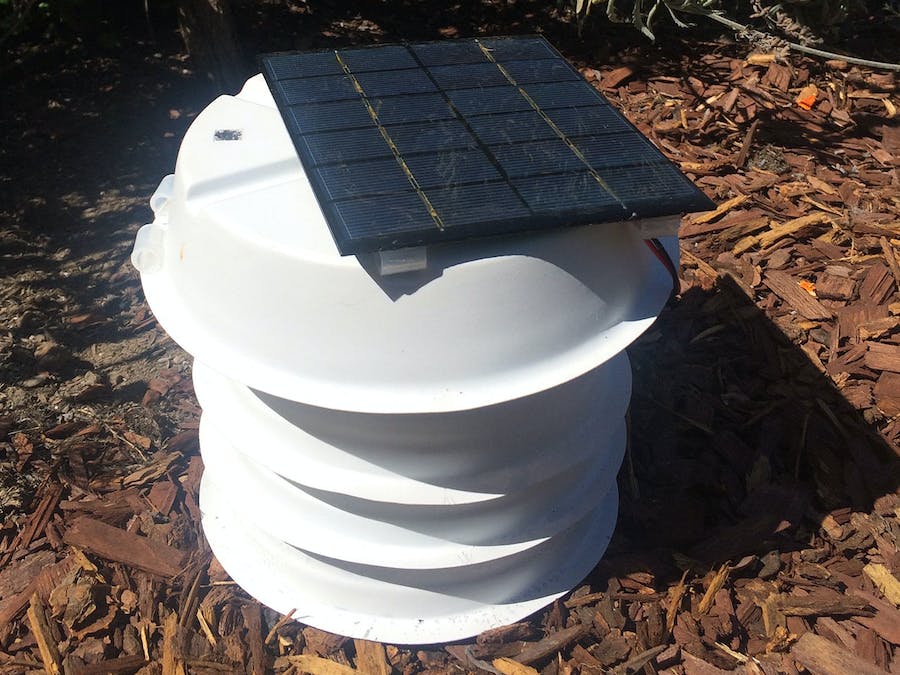 The quest to track weather is made a bit easier by the SparkFun weather shield for the Particle Photon. A tiny package with sensors, wifi and hookups for more sensors sounds like it would make things easy.

I attached a small solar panel, a charger and battery to run my small weather station wirelessly.

The enclosure was a bit of an experiment. I could buy the nice ambient weather enclosure and be done, but I wanted to see what the cheapest thing I could build (that would work) was.

I picked up a bunch of garden pot liners for about 50c each, 3 long machine screws and bolts and a short length of hose. Spacers were pretty expensive (50c ea) so I cut the hose into short lengths to use as spacers.

It is not elegant, but it shields the sensors from rain, and breathes well enough that trapped heat doesn't give me bad data.

Also want to get my uv sensor plugged back in, I want to make sure the shield is working ok for a few days first.

Longer term I will get wind and rain sensors hooked up also. (some cheapish Fine Offset ones - generics for the ambientweather/sparkfun ones)

I am seeing some screwy readings from time to time, and it turns out there may be some issue with some particles and i2c, which is bad because the SparkFun weather shield has the particle talking to the sensors over i2c.

I updated the particle's firmware as per:

and am running it for a while to see if that clears things up.

Looks like the new Particle firmware did not fix the i2c error, I am still getting occasional bad data from the sensors.

Particle is still working on testing a firmware fix, in the mean time I loaded up the Core instead of the  Photon and everything is looking good, reliable power up, sensors and send off to Weather Underground. At least I know my code and the SparkFun shield are solid.

In the mean time the core is working swimmingly with the same code (except it wants spark.sleep instead of system.sleep) .

Hooray! Particle has released new firmware that is supposed to fix i2c on the Photon.

I will test it when I get home and report back, but I am optimistic.

A few days of testing, and it looks like the new firmware sorted the Particle Photon out.

The Weather Underground example code has been merged into the SparkFun examples on GitHub, and has also been updated to use their new unified library. My station is still sending and happy with the updated code.