Receive notification of activity in your home. Know when unauthorized guests are in your home and when important items are tampered with.

Receive notification of activity in your home. Know when unauthorized guests are in your home and when important items are tampered with. 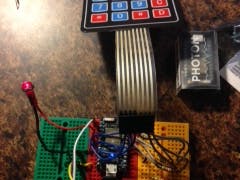 This is a small autonomous home detection system that is adaptable and easy to install. This system has the capability to detect movement or the tampering of almost any item in a home or anywhere with an internet WiFi connection. By utilizing a Photon Particle that connects to the internet, a detection program is able to be uploaded and installed to operate various simple components. The photon operates a PIR motion detector, LED lighting and a magnet separation indicator.

The Particle is able to connect to the internet and can be accessed anywhere to operate or upload programming to operate the system. A code is written using the particle.io website and is then “flashed” to the Particle for storage and operation. The Particle stores and follows the commands uploaded.

Once the Particle is in operation, the motion detector, LEDs and magnetic tamper devices are monitored by the particle for changes in voltage that would be caused by movement in front of the PIR or separation of the magnets. The signal is received by the particle and a notification is immediately sent to the customer via their choosing, text message, email, push notification on their phone or any other type of mobile communication.

This notification is made possible by pairing the particle system with a user friendly app, IFTTT. The app is able to instantly pair with any particle and can be programmed to match a variety of command options when a specific event is published by the particle. These tools offered by the particle make for a very easy to use, do-it-yourself autonomous system.

To begin development of this system, starting at basic circuit building was necessary. The team researched and developed skills in basic circuit building and instructional videos on developing particles and Arduinos. Understanding how the particle and similar systems operated was essential to knowing where to begin.

A simple LED with simple voltage source was constructed to begin testing. The LEDs were found to be very sensitive and would burn out quickly if the voltage source was not regulated to the LED’s tolerance. Many LEDs have a low voltage tolerance and needed resistors to keep them from burning out. A better quality LED with at least a 3.3V tolerance range was chosen to simplify the system and make it more compact by eliminating extra parts.

Once some basic circuit theory was conducted, ordering the various parts was necessary. The internet was an excellent source for what was needed to build the system. Previous examples of other attempts at developing similar systems were observed. Technicians at Radio Shack were an invaluable resource that was used to understand what parts were needed to accomplish certain goals. Many of the parts were able to be purchased directly from Radio Shack. The other components were simply ordered online through Amazon.com and Particle.io.

Physical construction of the system

Physical construction of the system was able to begin once the components were gathered. The particle was very simple and easy to understand. Setup was also quick with the tools provided by the website and applications for mobile devices. A PIR sensor was connected to the voltage out of the particle and a Vout of the sensor was wired to a node of the particle. On other nodes of the particle, LEDs and the magnets were wired to as well with everything going to a common ground on the particle.

With every component wired to the particle, the code had to be composed online on the website particle.io. This was by far the most difficult part to do for the system. Many hours of research and development went into understanding the unique coding of the particle. There is a vast library available on the website to give a good direction as to common terminology and formatting. Each code is very unique though and can be tedious to troubleshoot errors.

A Unique code was written for both particles to perform their respective operations. One particle was for the front door while the other was placed in the kitchen and wired to the refrigerator door for monitoring of the kitchen occupancy as well as refrigerator tampering.

The original conceptual idea for the system included a 3 x 4 number keypad.  The keypad was purchased and installed onto the particle. The keypad was not able to be part of the final product because of the failed attempts at writing a functioning code for the particle. The code was ambitious but due to time constraints and the amount of failed attempts, the plan was deemed detrimental to the delivery of the system by a certain date.

The code for the keypad was found to be extensive and beyond the scope of the team’s ability. Six different functions were needed to attempt to get a close to working code. The only obstacle that was not able to be overcome was a command word, “byte”. There is no translation into particle code for this. Research found that from other examples of code a certain method was needed and there needed to be a translation for this word but none could be found.

The team was able to outsource the casing for the monitoring system to be 3D printed. 3D printing is a good choice financially and gives the flexibility for a unique custom built case for this system and any future customer’s needs. The original casing was designed to house the system and leave for the placement of the keypad on the exterior of the case. This model is now obsolete due to the negating of the keypad. The case design will be archived for later use once a code can be developed for the particle.

This late design change left the system with little time to deliver the correct casing for the final design date. The final casing will be delivered and operational Friday, April 27, 2016.

These systems along with customizing parts through 3D printing display how versatile the product truly is. Small size and flexibility of placement of parts and monitoring abilities make this an effective, trustworthy substitute for current market monitoring systems. Compared to financially, this system offers almost all of the same capabilities that current commercial monitoring systems short of notifying authorities that there is an intruder.

This system is a significantly better value when comparing approximately $100.00 to the price of $1500.00 with monthly monitoring fees ranging from $20.00 to $100.00 or more. If notifying authorities was a concern or drawback to anyone interested in this system, through notification of the customer via any mobile avenue, the customer has the ability to immediately notify authorities that there is an unauthorized person in their home (or refrigerator).

Once the keypad code can be troubleshot, the system will be able to offer the ability for guest that do not have access to the mobile application to deactivate the system via a code given by the customer. Currently since the device does not have this ability, guests and other residents of the installed home have access to a small switch located on the device that can simply alter power supply to the components of the particle disabling any alarm notifications.

Not only does this particle system display how simple it is to create a wireless internet connected home but it shows how easy it is for devices to be connected with minimum effort to the internet. By applying resources and effort, every item, device or even electrical system can be connected with ease to the internet and be run either autonomously or with simple push button commands given by a user. 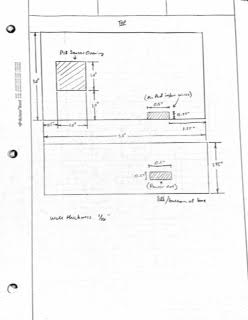 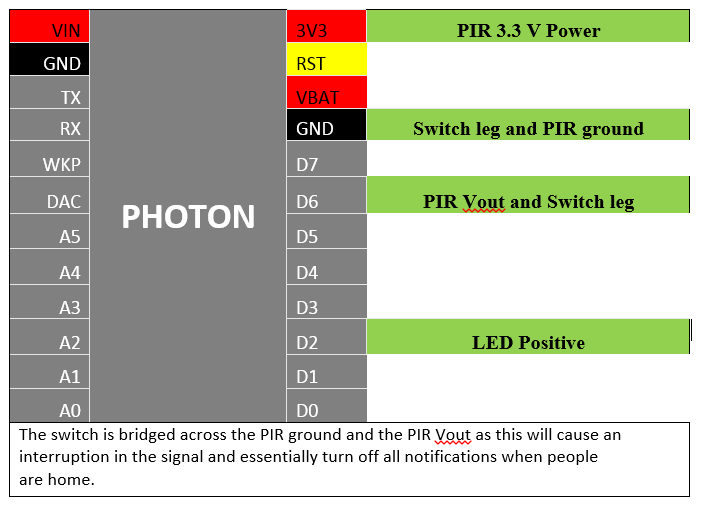 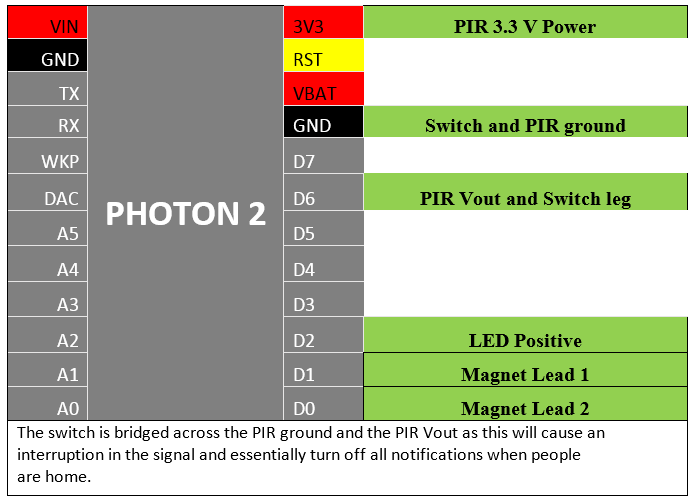