Are you like me? Do you kill all your plants because you forget to water them? This project solves that.

Are you like me? Do you kill all your plants because you forget to water them? This project solves that. 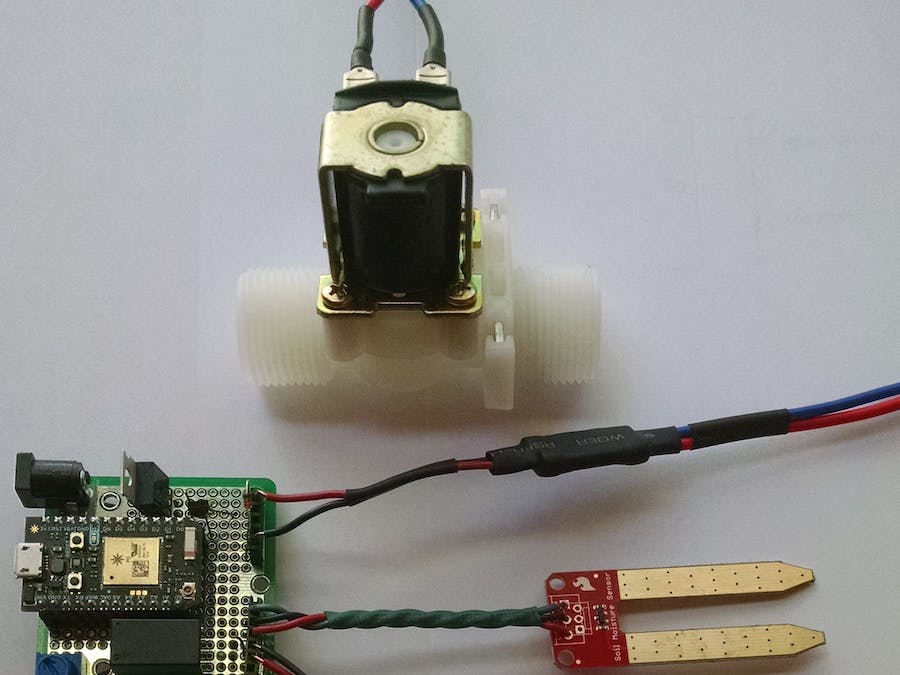 The goal: create a system that can sense when a houseplant or small garden needs water, then water it.

This system uses a particle photon, the Sparkfun soil moisture sensor, a light level sensor and a electronically controlled valve to keep the soil moisture above a specified level.  The solenoid valve has standard garden hose threads on it.  It also is designed to work with gravity feed systems, so that this system can operate from a rain barrel instead of working from the plumbing of the house.

The power cord used in this project provides 12 V and 600mA.  The photon can only run on 3.3-5V so I used a voltage regulator to step down the 12 V to 5V.  It's necessary to have 12 V available because that's what's required to actuate the solenoid.  The electrical circuit used to control the solenoid is shown in the image below.

At first glance this might seem overly complex.  I'm not an electrical engineer so there may be a simpler way to use a 3.3V signal to control a 12V device, I just don't know what it is.  This circuit works because when a high voltage (3.3V) is written to the D0 pin it allows current to flow through the transistor.  This results in a voltage across the diode which energizes the coil in the relay.  This closes the circuit through the solenoid and actuates the solenoid.  The end result is that when your code applies a voltage at D0, water will flow through the valve.

This system has 2 sensors.  The first is a light level sensor.  Because of the specifics of your plant/garden it might be undesirable to water at night or at the peak of the day.  So in order to prevent this, I included a photo resistor in order to sense the light level.  It is wired in series with a normal resistor to create a voltage divider and the voltage reading sensed from analog pin 0 (A0) is taken to represent the light level.  Note that resistance in the photo resistor is inversely proportional to the light intensity (more light = less resistance).  In order to create a voltage reading that was directly related to the light level (more light = more voltage) I wired the photoresistor before the normal resistor in the light-sensor circuit.

Sensor Wiring: note that this wiring and the wiring on the previous diagram all exist on the same Photon.

The second sensor is the soil moisture sensor.  It's simply two legs of a board, plated in gold that are stuck into the soil.  As the soil moisture changes, the resistance of the sensor changes and the voltage at analog pin 2 (A2) changes.

Here's what it all looks like soldered to the board.

Close up of components mounted to a 2"x2"  board.

The underside of the board is a mess of solder and wiring so I didn't include a picture.

How the code works:

There are three functions in this code.  The waterTheGarden function works by opening the valve and monitoring the soil moisture level for a set time.  If the soil moisture does not rise above the specified limit in that time window then the function returns an error.  The averageReading function polls an analog pin multiple times and averages the value.  As inputs, it takes the pin number to poll. the number of times to poll the pin and the time in between pollings.   The publishSensorReadings function exists to publish the sensor readings to multiple places on the internet (Ubidots and the particle cloud).  It contains code to increase robustness, ensuring that the data is published.

The website https://ubidots.com/ interfaces smoothly with the particle photon and provides a convenient way to monitor the sensors attached to the Photon.  I built this interface to display the quantities I was interested in but you can build yours any way you want.  The data shown here is from a period of about 3 days when the soil was extremely damp.  Also, I was unplugging and reprogramming the system a lot on the 4th day so there is a lot of nonsensical data on the right.