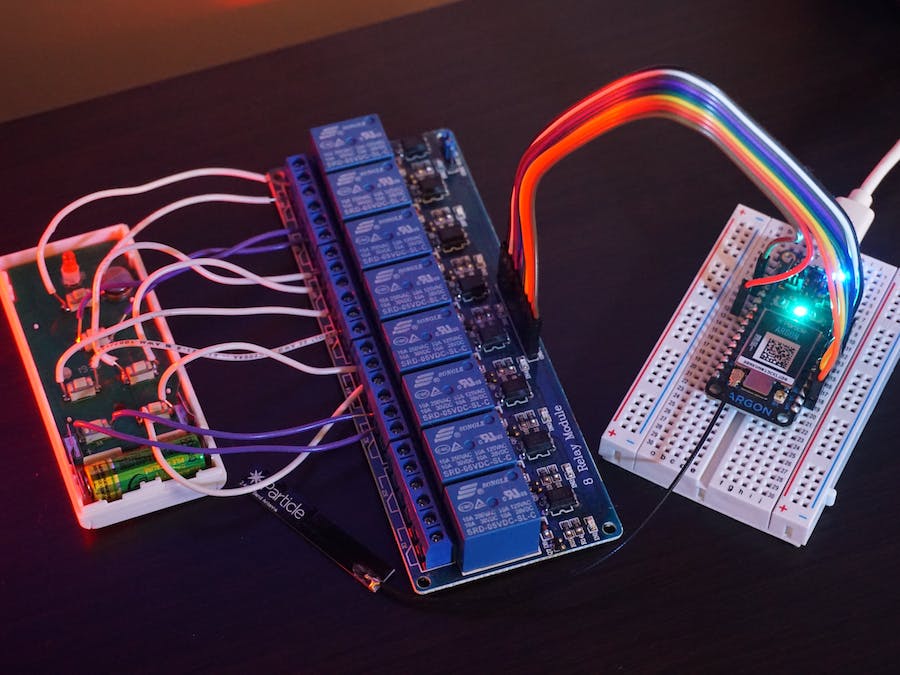 For the course Introduction to Measurement and Instrumentation, MEGR 3171, we were assigned with creating an Internet of Things (IOT) project that could solve a problem or supply a service for everyday life. We were instructed to use Particle Argons and sensors of our choice for the completion of this project. Our group decided to do a lighting project based upon human position for a bedroom. Our sensors of choice were ultrasonic sensors placed in two locations in the room that were tasked with their own sets of lights.

Through successfully completing this we removed the need for things such as light switches, manually turning the knob on your lamp, and always having to locate your remotes for led strips.

This project works with two Particle Argons utilizing bidirectional communication. The first Argon ("Taylor device") is connected to an ultrasonic sensor. The second Argon is connected to another ultrasonic sensor and also a 8-channel relay that is wired into a pre-built remote outlet controller ("Alex device"). Both of these sensor are constantly measuring and then when a person, or object, enters or leaves the range of one of the sensors the code for this particular section is activated/deactivated. This is achieved by publishing sensor data to the Particle cloud (from the "Taylor device") and using the other particle device (the "Alex device") to subscribe to this datastream. Once this has happened the relay activates/deactivates the certain remote buttons that are needed for the lights corresponding to the area in which the object was detected. Also a simple type of security system is included in the build. When an individual enters the range of the "Alex device" a blue notification LED will be illuminated on the "Taylor device". This is also helpful for trouble shooting the lighting system.

The system integrates a special type of logic loop that restricts the devices by only allowing them to publish data from the sensors if a person or object has just come into or just left a pre-specified range. This allows the publishing channels to not be overrun with redundant data (causing data clogs). The code has also been streamlined to only publish a single number or logic statement for each communication of the devices. This allows the performance of the devices to be maximized despite the 1 second buffer time for devices publishing values to the particle cloud and also circumvents the limitation of 3 particle subscriptions per code.

An additional feature included in the system is an automatic graphing system that displays not only the current devices being used but also tracks this data over a period of time in the past. The team utilized ThingSpeak to accomplish this. The data from the test bedroom is still being published live at the link below.

Here is a video showing our project in action.

While significant time and effort was expended to insure the most streamlined and efficient code was utilized, the system still has major limitations because of the inaccuracy of the ultrasonic sensors chosen. If done again, focused light virtual tripwires using lasers and a photodiode would be more optimal for this application. This would remove the erroneous sensor readings that appear once every 15-30 seconds from the sensors. Additionally, the cloud publishing nature of the communication between the devices introduces a delay that could be negated by using BLU nearfield bluetooth communication instead of wifi.