Home innovation project for Lane Tech PCL, Closes a lid on a candle after 2 hours of it being lit.

Home innovation project for Lane Tech PCL, Closes a lid on a candle after 2 hours of it being lit. 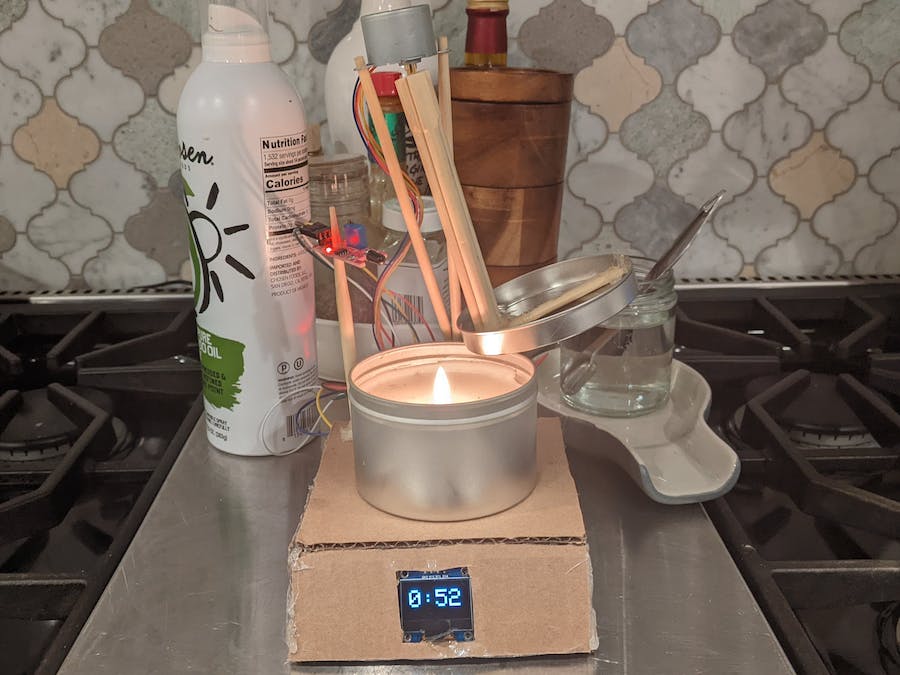 When we first started this project, My mom was totally obsessed with lighting these trader joes candles. She had like 4 of them in our house at all times, but she would always light them and then forget to put them out, so when at 11 pm, I came downstairs to my kitchen for a glass of water I had to put the candle out.

I thought to myself, this is really annoying. Sure the house smells nice but this is 100% a fire hazard. And thus the idea for the candle closer was born.

The initial plan was to create a lid of sorts that I could attach to a stepper motor and close onto the lid once a timer was set.

The first thing I decided to do was actually test how long it would take to extinguish the flame of the candle, with the most minimal amount of smoke. Considering the main idea of my project was to make my house safer, I figured that was a pretty important first step.

I ran some tests, and I came to the conclusion that the best time was around 18 seconds. This made it so that there was a minimal amount of smoke, and the flame was fully extinguished.

I decided that my first step would be to figure out the basics of the actual electronics I was using and make sure I actually understood what I was using.

The flame sensor was pretty simple, to understand, I literally just connected the wires to the corresponding places on my argon, and it worked. It wasn't crazy difficult.

Then I decided to tackle the LED display.

I used the Adafruit led display library, and I ran into some issues messing with the initial code that I took from the library

just the wiring of the oled display

but after some collaboration and assistance, I was able to make it work, I ended up changing the display size from 0x3D to 0x3C.

I also from there worked on creating the countdown timer that was displayed on the display.

I also made a design for a candle using the led matrix that is linked to the project. I wanted to have this so you could tell when the project was on but was not sensing a flame. This made it easier for me to actually test out my project.

Then I tackled the stepper motor.

The initial issue with the stepper motor was that I literally put in the wrong values with the code (which is fixed) But I thought it was that there wasn't enough power, so I hooked up my entire argon to a 5v adapter, so that way the project was powered through an outlet and it was all powered.

Then I got the stepper motor to work and began actual construction.

I realized pretty quickly that my initial sketch would not work, so I changed it so the actual stepper motor was propped up by another stick, and rather than turning to on top of it, I have it so it slides over the lid, changing it from closing vertically onto the candle to horizontally on the candle.

After that, I propped up the flame sensor and decided to run my code!

It worked, but I had used hot glue almost entirely to attach all of the components of my project together, and as I'm working with fire, the hot glue started to melt a little bit over the flame.

To fix this I took about half a teaspoon of water and put it in the lid of my candle to keep the hot glue from melting.

This was a very well-working solution, but obviously, water and electronics don't mix well, and this is something that would have to be replaced after each use, so for a long-term thing, this isn't practical. If I were to make this again, I would probably use superglue instead of hot glue.

And that was it. This is the final project running. In this specific instance of the recording, It is sped up to be about two minutes rather than the intended two hours, but I also ran it at the two hours on my own and it worked just as well.