Converting a RC car to an IoT car with a Particle Photon and controlling it with the Blynk app.

Converting a RC car to an IoT car with a Particle Photon and controlling it with the Blynk app. 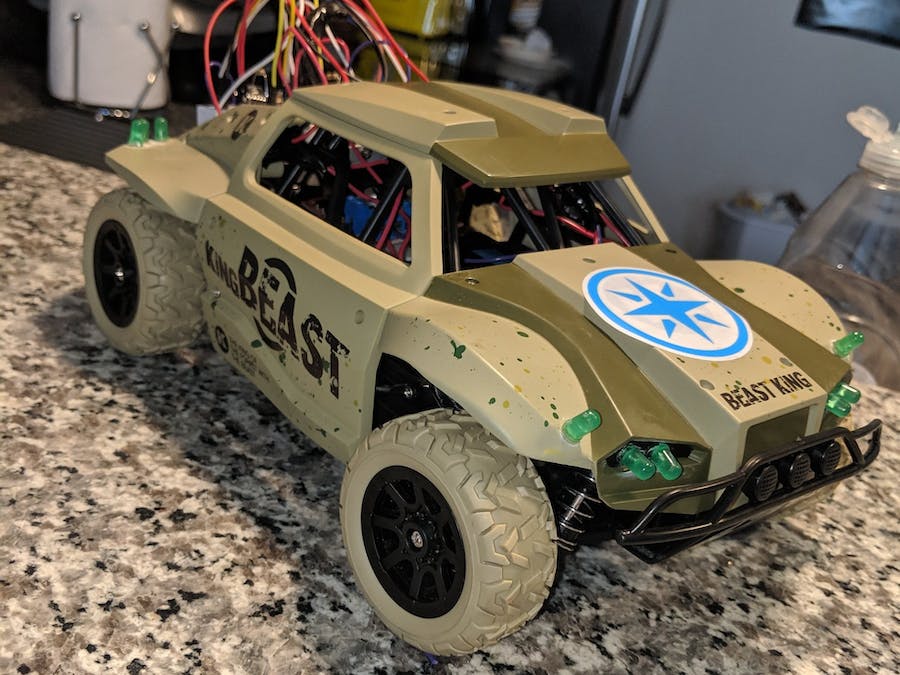 This project was created for a instrumentation class at the University of North Carolina at Charlotte. The objective with this project was to design and implement an IOT project to solve a problem or provide a service. We had to use 2 particle photons that had to have Bi-Directional, 2-way communication between them. After researching different ideas, we decided to build a IOT controlled RC car with the 2 particle photons. The first photon would actually control the car with the help of the BLynk app. The second photon would get signals from the first photon and trigger turn signals, that are located on the RC car.

To start the project we had to buy a cheap but tough RC car and a DC stepper motor controller. For the RC car we ordered a 1/18 scale, 2.4G radio remote control car that was four wheel drive and had a top speed of 25km/h. The DC motor controller we ended up going with was a L298N. This Motor controller had a Dual-channel H-bridge driver working mode, which creates a higher working efficiency. Also, the L298N can drive one 2-phase stepper motor, one 4-phase stepper motor or two DC motors. After all the parts come in, we then started to take apart the car.

Under the plastic cover was 2 DC motors, one smaller one for steering, and one larger, for forward and reverse. The car was full time four wheel drive. The car was originally controlled by a small board with an antenna. Two wires (Ground and Power) per motor went into the board, as well as a power and ground from the battery. The car ran off of a 9.6V Ni-Cd battery with an ON/OFF switch cutting off power to the board, which you can see below.

After inspecting the heart of the car and seeing what makes it work wires were run from the power switch, the steering motor, and the drive motor. Then drilled 6 holes in the plastic case with a 3/16" drill bit and labeled the holes. This would help me keep up with which wires went where. After the wires were run threw the holes, the plastic case was screwed back on.

App Screen that shows the Four Buttons that Control the Car

Now that car will run and work properly again, it was time to add the other photon. The 2 photons had to have bi directional communication. This was accomplished using the Publish and Subscribe function. Ultimately this is a message that one Photon publishes to the Particle Cloud and then the other Photon listens for this message and when heard, does the task.

The second photon was placed right behind the first one, on the same breadboard. The first step was to drill 3 holes at each corner of the car. Then add super glue to the bottom of the all the LED's and place them in the holes. The LED's have 2 legs at the bottom and the longer one is the positive and the shorter one is the ground. Then soldered wires on each LED leg. These 6 wires were drawn together at each corner and soldered to one single wire. Therefore, each side of the car will only have 4 positive and 4 negative wires that will controls the turn signals, for simple wiring.

The two codes that were flashed on the 2 photons are below in the codes section.

The last part of this project was to graph real time graphs. We ended up graphing a right turn signal versus time. Our graph is kind of pointless since we don't have no real data to collect for this particular project.

Here is a video showing the car working properly. The reason why I was holding it was because the battery was getting weak and wasn't allowing the second photon to connect to the internet. Therefore, had to hard wire the internet to the photons. 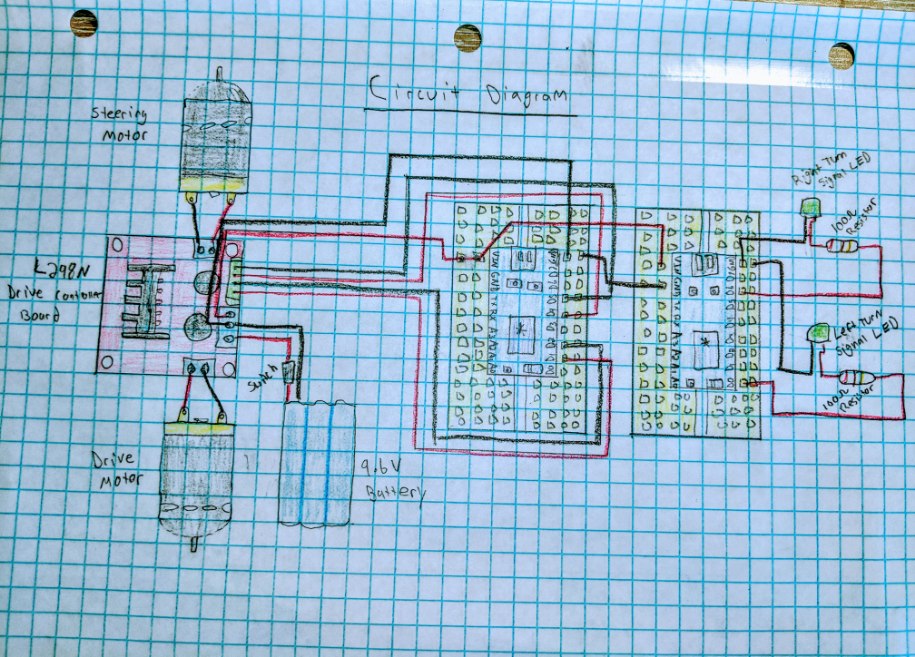