Our goal is to make an updated version of the standard cane for the blind.

Our goal is to make an updated version of the standard cane for the blind. 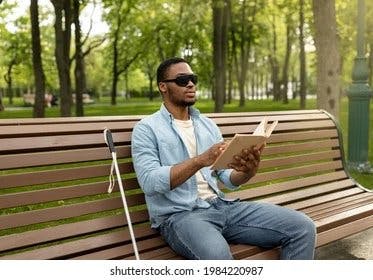 The story behind our project is not especially personal but more empathetic. We designed an assistive walking stick with the recently blinded in mind as there is a learning curve to “seeing” your way around with a stick. It is particularly useful as it beeps before the stick actually hits something so the user has time to avoid the obstacle or at least they will have a warning before the stick bumps into it. It can also detect puddles or other standing water obstructions with the use of the water level sensor. The stick with the added insert and circuitry is designed to still be very light so children and older people can use the product as well. The IoT skills we have learned over the 2022 spring semester taught us how to expertly program our sensors to communicate with each other and give different warnings for the different types of obstacles.

This project is an assistive walking stick for the blind that alerts you when you are 12 inches or less from an object or if your stick detects water beneath it. It will also beep at 2 different patterns and tones to alert the user of either scenario. Our setup uses two Particle Argons that send data received from the 2 sensors and communicate the outputs between each other and to the cloud. These Argons rely on signals from an analog distance sensor consisting of an IR emitter and receiver as well as a water level sensor. To make our physical prototype, we have designed 3D printed mounts that allow us to attach our electronic array to a regular FlingGolf FlingStick. A FlingStick was chosen for prototyping as it is a comfortable length and weight that can be for a wide range of statures and abilities, as well as the head allowing an area which the sensor array mount could be easily designed for.

The primary argon will first receive a detection readout from the distance sensor or water level sensor and send it to the Particle Console. Once in the console, the secondary Argon will then receive the incoming data from the Particle Console. Based on the range or wetness readout, it will beep one of 2 patterns to alert the user of the obstacle, as well as send a signal back to the Particle Console that it is beeping for an object or for water. Both Argons will then confirm this beeping message was received by blinking one of two patterns based on whether an object or water was detected.

Thingspeak will also collect and plot the data outputs from Argon 1. Unlike a lot of projects that are constantly running to monitor, our project only will plot when we have it powered on and are intentionally using the cane to detect. However, when an object or water is detected, the distance to the object or the water level detected by the sensor is plotted live, which can be seen here: https://thingspeak.com/channels/1703391

Pictures and Video of Prototype

The sensor pack test shows the water sensor working as we did not determine a good way to test the water sensor when attached to our full prototype without better waterproofing the remainder of the assembly first. We would like to further design the head moving forward to make the weatherproofing of the entire system better.

The full assembly testing went very well and was detecting objects as intended. As an update, we intend on using an external power pack that would power both Argons and would mount to the same mount as Argon 2 does on the shaft. 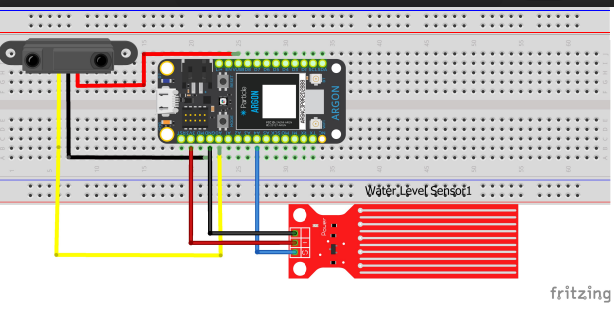