Yet Another Particle Garage Opener

Yet Another Particle Garage Opener 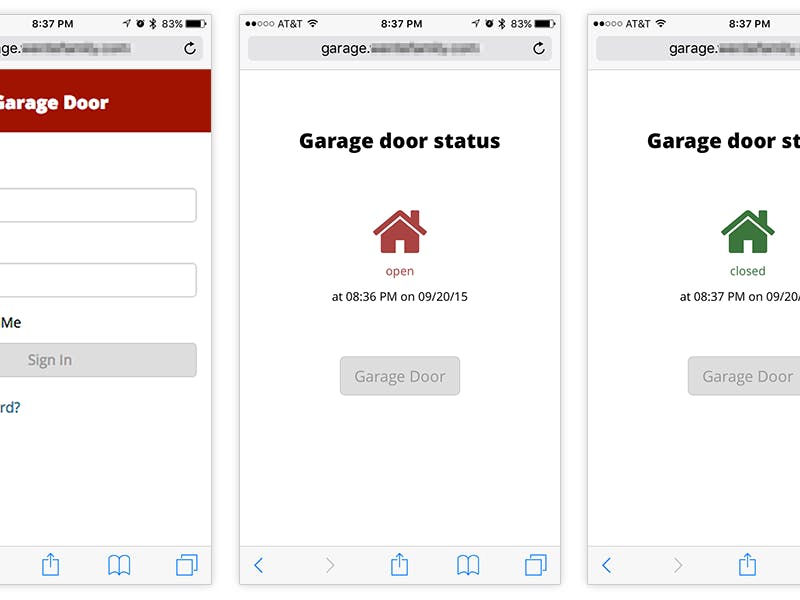 So I saw a post on makezine blog  to use a photon as a garage door opener. Since I had one that I wasn't using at the moment and my daughter just got her drivers license, we needed another remote.

I wanted to know the status of the door so I added the reed switch.

It seems to be a pretty straight forward build. I used the suggestion from the article to use a two channel relay to prevent triggering on powering up. I looked into creating a 3D printed enclosure but it was $20 to have one made. So I settled for an enclosure I found in the kitchen.

I also wanted a web app so my daughter or anyone for that matter could open the door. I used a content management framework that I use to build web sites with. It had all the tools I needed to create a nice looking web app.

I also have a script hooked up to the button to fire off an email with the username tagged with #garage for IFTTT to send me a notification. In the future I want to add more users and limit them to certain times and days of the week. I am also thinking about recording the data and sending an alert if the door is open for more than 30 minutes.

I noticed some other projects were having problems with the reed switch magnets not being strong enough. I used the cheapest reed switch I could find on Amazon, and just moved it closer so that they barely touch. I used some plastic from a Arizona Tea jug. it is perfect for the job, it is flexible enough not to get caught on the door and rigid enough to keep it close enough to the switch.