IoT Alarm based on Particle Photon. Alerts via Pushover. Managed by iPhone app. Sensors based on 1-wire, I2C, Serial and Particle Cloud.

IoT Alarm based on Particle Photon. Alerts via Pushover. Managed by iPhone app. Sensors based on 1-wire, I2C, Serial and Particle Cloud. 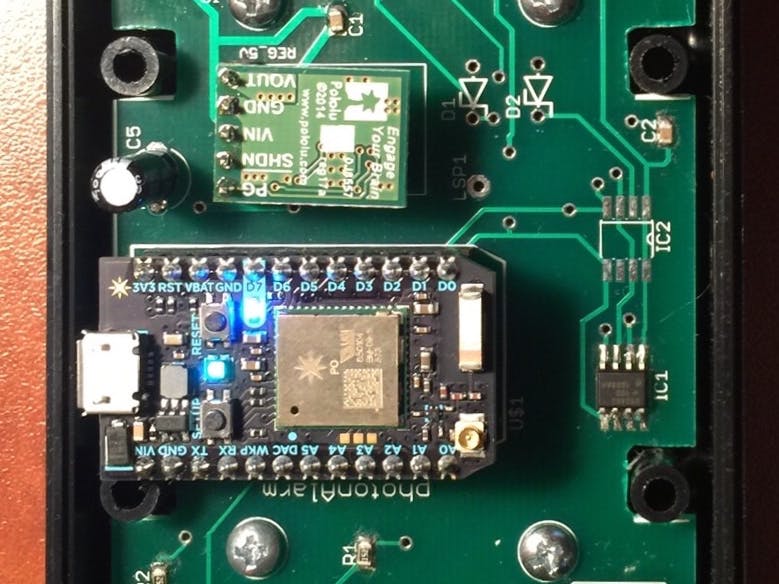 This project is one of many alarm systems I have built over the past 20 years. The first was based on a Motorola 68HC11 with notifications to a pager sent through a modem. Other versions utilized various platforms including Ethernut and Arduino. The current version, utiliing the Particle Photon and potentially the Electron are the most advanced, IoT based, with notifications based on Pushover and IFTTT. The system is completely managed via an iPhone app. The system firmware, built in wifi, large memory, the Particle Cloud, and cloud firmware flashing make this platform ideally for this application and easy to work on as a development environment.

The current design includes a PCB designed on Eagle and ma manufactured by Pcbway. The software is written in C++ using several classes and many powerful c++ features including std::lib queue, list and map to implement various features. It also utilizes several libraries from other sources. All code is available on gitHub.

Currently the sensors are principally connected via the Maxim 1-wire devices connected to one of two 1-wire interface IC's. These 1-wire bus interface chips are DS2482-100 connected to the photon via I2C. There are two interfaces. One connects to sensors with exposure protected. The second can be openly exposed to allow for user interaction via i-Buttons (keys) which can enable and disable the alarm by a quick touch, but can not be shorted out to disable the sensor bus.

The operation is highly reliable as a result of a number of redundant techniques, including periodic notifications via Pushover, Photon off-line notification via IFTTT, and both software and hardware watchdog timer systems. Periodic 'worry alerts' to the iPhone let you know the system is running. A status button on the app sends you an instantaneous update.

Development on this project is a work in progress.

Two prototypes, one hand wired, and one on the board-houses PCB have been running for about six months and have exhibited high reliability. Alarm events (intrusion, motion detector, over/under temperature, basement water) all report alert to iPhone in about two seconds max.