With this climate monitor the temperature, pressure, and humidity can be observed for your area!

With this climate monitor the temperature, pressure, and humidity can be observed for your area! 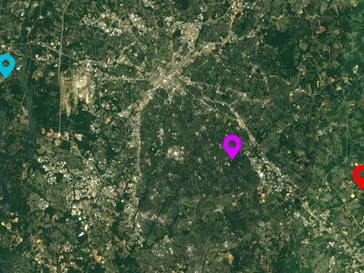 This is a project for MEGR 3171 Measurement and Instrumentation. The purpose of this project is to learn how to create an IOT run device that uses sensors to measure something. We chose to create a climate monitor that will gather data of the temperature, humidity, and pressure. There are three of us in our group and we live in different parts of the city. We were able to gather data of the west, east, and south-eastern parts of Charlotte.

To begin this project we identified the sensors that we wanted to use. Two sensors:

The DHT11 sensor is capable of measuring temperature and humidity. It uses a capacitive humidity sensor and a thermistor to measure the surrounding air. It is an analog sensor that converts the readings to digital signals and sends them to the device. This sensor has worked decently throughout the project and showed values well within reason. This sensor works a little slow so there has to be a greater delay and sometimes there will be improper readings in-between.

The BMP180 sensor measures temperature, pressure, and altitude. It has proven to be a reliable sensor. When running throughout the day, this sensor proved more reliable than the DHT11 because it gave steady values without any drops.

To begin collecting data we had different powering configurations. One of our group members used an extension cord and a breadboard power supply. The other configuration was to use a power bank. In order to keep the power bank on and LED had to be added to the setup to draw enough power.

With Ubidots we were able to display our data in a line graph and also in tabular form to compare our values. We were also able to display our data with our GPS coordinates to have a better visual of what parts of the city the data was being gathered from. Since the DHT11 was not able to provide good consistent readings the graphs show random drops, these should be disregarded.

Another goal for our project was to be able to make our Particle Argon’s communicate to each other. There was a recent change to the way that Particle subscribe and Particle publish work. This past summer Particle made it to where if you wanted to use subscribe or publish, the devices will need to be under one account. This added a challenge to get our three devices to communicate to each other. We decided to create a group account for our Particle Web IDE and a group account for Ubidots. The handshake is the communication between each device. 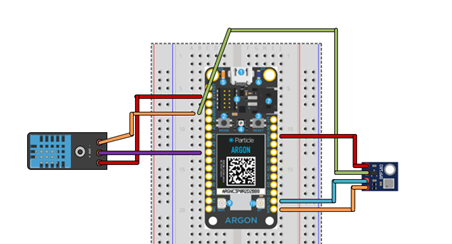