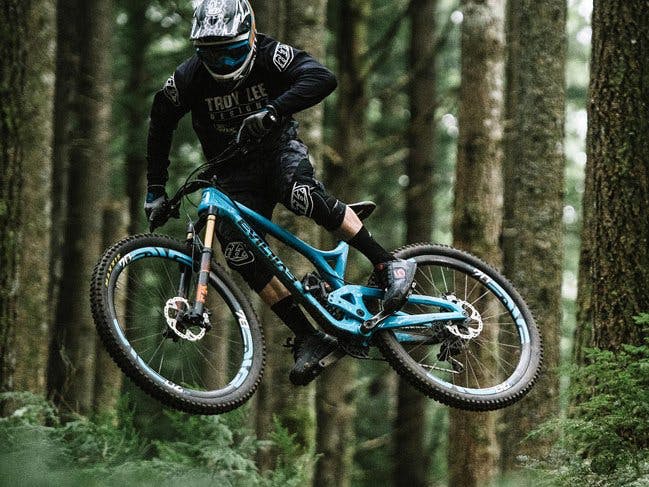 The mountain biking community has been flooded with innovation over the past few years. Companies are constantly trying to make your ride faster, longer and more entertaining. The invention of the dropper seat post and adjustable suspension for mountain bikes are two separate aspects of the bike that has changed the way people ride their bikes. This project ties both innovations together using two Particle Photons.

When descending down a trail on a mountain bike, an individual wants to lower their center of gravity which is done through lowering the seat by depressing a lever on the handle bars. The rider will also want the suspension of their bike to have as much travel as possible to soak up bumps which is accomplished by turning a knob on the front fork. The opposite is true for climbing up a trail. A rider wants the seat in a raised position and fork to have less travel to conserve energy. By tying these two motions together, we have created one streamlined process.

On the rear of the bike, we have mounted one of the Particle Photons and a proximity sensor to detect the position of the seat.

On the front of the bike, we have mounted the other Particle Photon which is connected to the servo motor attached to the fork adjustment knob.

A short explanation and demonstration of this project in action can be seen in the video below.

Here is a link to a Google Spreadsheet with a real time data display of the seat post position. This was accomplished by creating an IFTTT applet that wrote to a spreadsheet when "seatpost" was published by one of the photons. The graph shown is the graph after testing the setup.

This project has room for improvement in the cycling industry. The invention of the electric assist bike has already brought the world of circuits, batteries and electricity to the mountain biking world. With a little more development and the use of existing technology, this idea could be internalized into the respective parts, making the system more durable and reliable.