Monitor your grill and meat temperatures on your Android phone.

Monitor your grill and meat temperatures on your Android phone. 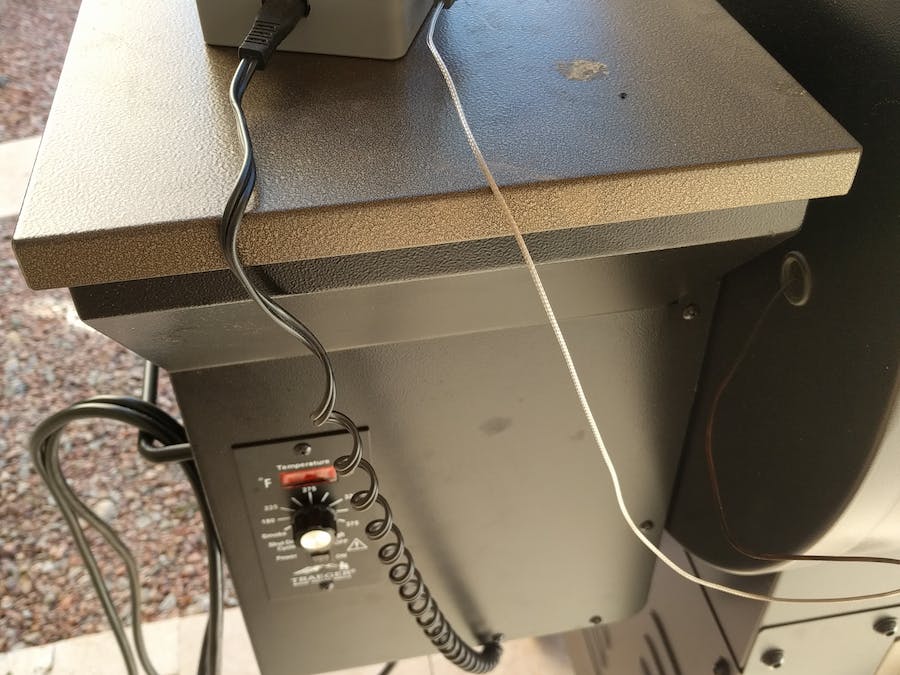 I got a new BBQ grill recently and I wanted to be able monitor the meat temperatures from my smartphone. I looked into commercial products, but they were quite expensive and the apps didn't look all that great. Additionally, the Traeger wood pellet grill that I bought allows a "set and forget" grilling method.  I'm lazy and wanted to be able to just put the meat in the grill and have my phone alert me when it's done. Additionally, I love to build my own stuff so I can customize it exactly how I want it.

I took an old phone charger and removed the case and wall outlet prongs. I had an old power cord and socket from an electric shaver I was able to wire up to the phone charger. You can see the large white plastic divider in the image I used to isolate the photon and low voltage wires from the high voltage guts of the phone charter. They are all put into a weather proof box I got form Digikey. I glued a couple of rare earth magnets inside the box so it can just stick to any location of the grill I place it on.

Note: the 2.5mm headphone jacks I got are a little short. This means if you push the probe tip all the way in, it will short and not work correctly. I just ensure I back the probe tip out by 1mm when I connect them.

At the time, I had the photon with headers and the battery board, so I used both. You could eliminate the battery board if you purchase a lead-less Photon and solder the wires straight to it.

With a multimeter and a careful hand, I was able to probe the Traeger control panel and find the Line and Neutral 120v points that I could solder the other end of the shaver cord to. These points are only live when the power switch of the grill is on, so that's a bonus. (Sorry I don't have pictures of that, but I do remember they are directly behind the LED panel along the bottom edge).

Power on one side, 2.5mm temp probes on the other
Plastic divider down the middle that's required to keep the 120v separate from the other parts