Use a Particle Photon, a SHT31-D sensor, and a cheap LCD20x4 to start your own clock project.

Use a Particle Photon, a SHT31-D sensor, and a cheap LCD20x4 to start your own clock project. 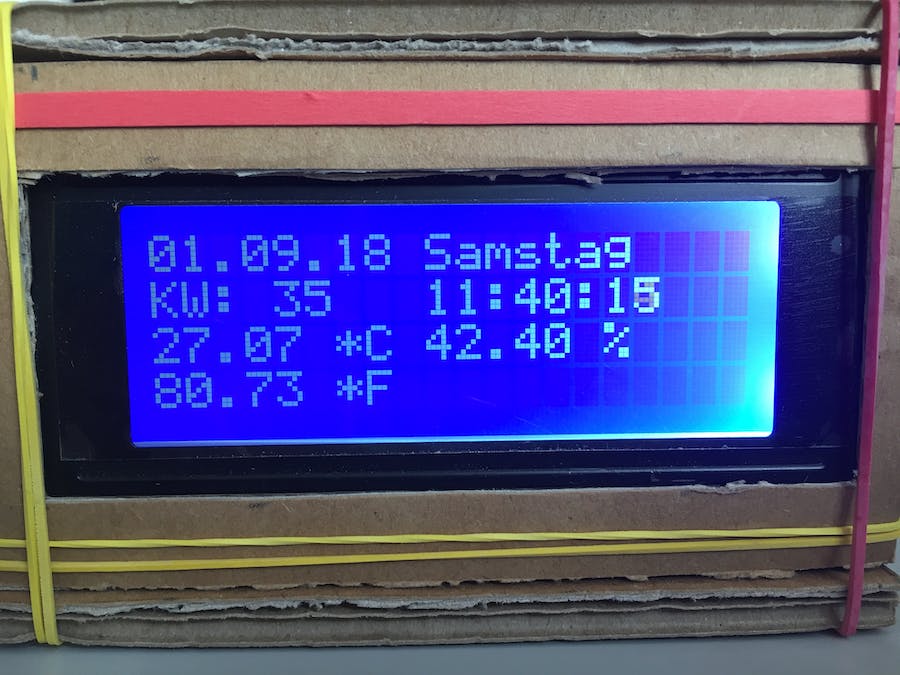 Since 07/2017, my desk clock powered by a Particle Photon runs smoothly with a BME280 and I thought it was time to change the structure slightly and to bring even a more precise temperature and humidity sensor to use.

Here I decided for the SHT31-D with a chip from Sensirion, which is distributed as a breakout board by Adafruit. The data sheet speaks of deviations in the decimal range and so I describe the uncomplicated conversion while maintaining the transmission protocol I2C.

circuit in a open paper box
SHT31-D connected on I2C

What should I do

The main thing was to just swap the sensor itself on the breadboard, check the I2C data transfer pins (SCL = D1, SDA = D0), and customize the library used in the Particle Web IDE in the code itself. An example file was available so that the values could be read and output to the serial interface for control (use the Particle CLI with the particle serial monitor command):

I had already prepared the LCD20x4 display with an adapter for I2C with 0x3F and the two HEX codes of sensor and adapter did not get in the way.

The SHT31-D has a default I2C address of 0x44 which you can change to 0x45 by connecting the ADR pin to the VIN pin.

What the SHT31 brings with it

If the determined values are falsified by use in the outdoor environment, for example due to moisture of dew or rain, then a heater can be used by means of code, which is turned off by default after a reboot.

There's a heater built into the sensor, used to heat/evaporate any condensation. You can turn it on or off with

After the successful code customization and the serial port test, I have the components disappear into a cut cardboard box and stabilized with simple rubber rings.

Anyone who feels called to create a 3D print template that can take a recess for a LCD20x4 and a breadboard, the may subscribe and make his contribution.

Despite the alleged exact measurement possibility, but I have my doubts: compared to a built in 3D-Enclosures BigClown but I have a - determine significant temperature deviation in my eyes! I was hoping to find an indication of a necessary calibration, but this is probably not necessary.

I do not want to exclude that the sensor can do nothing: it is finally in a cardboard box and is kept cuddly warm by the heat from Photon and LCD.

Get an insight into the products of BigClown Portfolio Overview.

Outlook into the future

So I'm still looking for a precise temperature sensor.

Incidentally, a weather forecast in the 4th LCD line can also be used as an option. This could be implemented with another JSON library and the tapping of a weather service.

You will find a STL-File in the attachments for housing the components.

48 projects • 190 followers
I am well over 50 years and come from the middle of Germany.
ContactContact