Ever wonder if the mailman has been by the house yet? Use this IoT project to know exactly when your important package has been delivered!

Mail In Your Box IoT

Mail In Your Box IoT

Ever wonder if the mailman has been by the house yet? Use this IoT project to know exactly when your important package has been delivered!

For this do it yourself project we are utilizing the IoT to enhance the abilities of the notifications of mail delivery. There are currently tracking numbers and estimated arrival dates for important mail and packages but these notifications are not in real time, they are a relative time. We sought a solution to the problem facing the relative time alert of deliveries. Behold, the "Mail In Your Box" real time mail delivery alert system!

For this IoT system there are two photons that communicate via the same wireless network that they are connected to. The particle program used to make this project possible is more convenient because it does not require further software. This enables the program to communicate more efficiently over the wireless network by eliminating other software systems as a "middle man".

Using the particle build required to allow the photons to communicate, code is written to manipulate the photons to perform desired functions. For our purpose these functions were for the photon, located at the mailbox that is connected to the motion sensor, to read the signal from the motion sensor and communicate that signal to the other photon on the network. The second photon is to signal a response, in our case the signal is to trigger an LED light and a buzzer to beep in order to inform the recipient that mail has arrived at the desired mailbox location.

The photon that is set up for detecting motion is mounted inside of the mailbox. For testing purposes we left our sensing photon free from any constraint in case changes had to be made to wiring or general set up. The motion detector used was provided in the Spark Fun Makers kit. This photon's code utilizes if statements to accept a digital input value from the motion detector. Then if the input value is greater than a specified threshold value set by the user, the photon will publish this as an event onto the particle.io cloud.

The photon that is set up for alerting the user is mounted conveniently inside users home. For testing purposes we left our alerting photon free from any constraint in case changes had to be made to wiring or general set up. The buzzer and LED bulb used was provided in the Spark Fun Makers kit. This photon's code utilizes a basic digital write output function to control the lighting of the LED, and sound of the buzzer. This photon is subscribed to the particle.io cloud and receives the published event data in order to perform the digital output alerting function.

For this project we incorporated two "If This Then That" applets to alert users of mail delivery, and update a spreadsheet with data log from published events. The first applet utilizes the IFTTT mobile app to notify IoT project users of a mailbox delivery to their cell phone. The app will push a notification on the cell phone whenever it is triggered via the applet. The applet is set up so that "if" a particle event is published, it will "then" push this event to the IFTTT app on the cellular device displaying a "YOU GOT MAIL" notification to the users phone screen.

Utilizing a Google sheets applet that updates a spreadsheet whenever event data is published to the particle.io cloud from our sensing photon. With this data we can monitor our delivery's, by logging the date and time the delivery occurred against the number of motions detected in the mailbox.

Above in Figure 1 is a visual representation of the date and time when the mailbox is accessed. The value "1" represents the digitally read signal from the Motion Detector that is sent to Google Sheets in order to record new data that creates the graph displayed. This new line is created in real time in Google Sheets via applet by IFTTT communication.

For demonstration purposes, and because our WiFi signal was to weak for the photon to receive when mounted in the mailbox outside, we used a cardboard box to act as our mailbox inside the house.

A video of the functioning project can be viewed here: 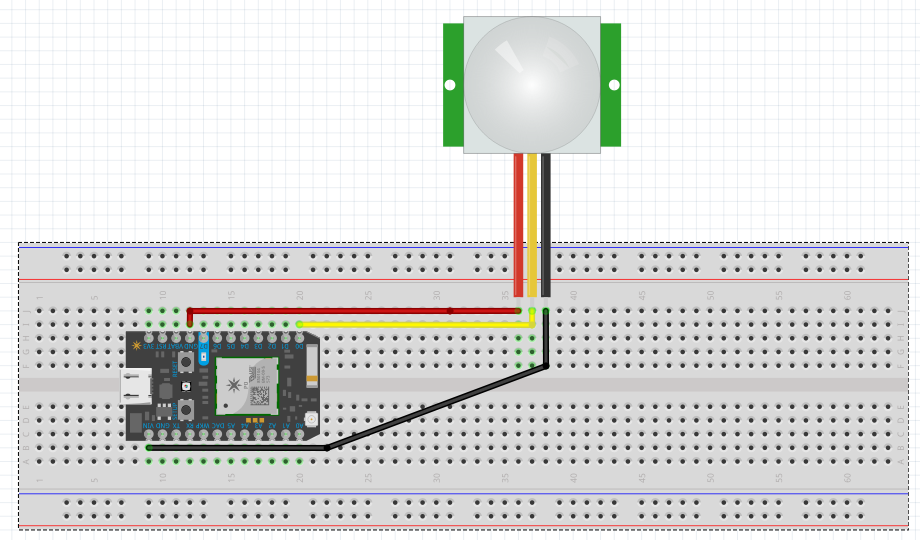