A dehumidifier for your 3D printing dry box to keep your filament dry without the need for desiccant.

A dehumidifier for your 3D printing dry box to keep your filament dry without the need for desiccant. 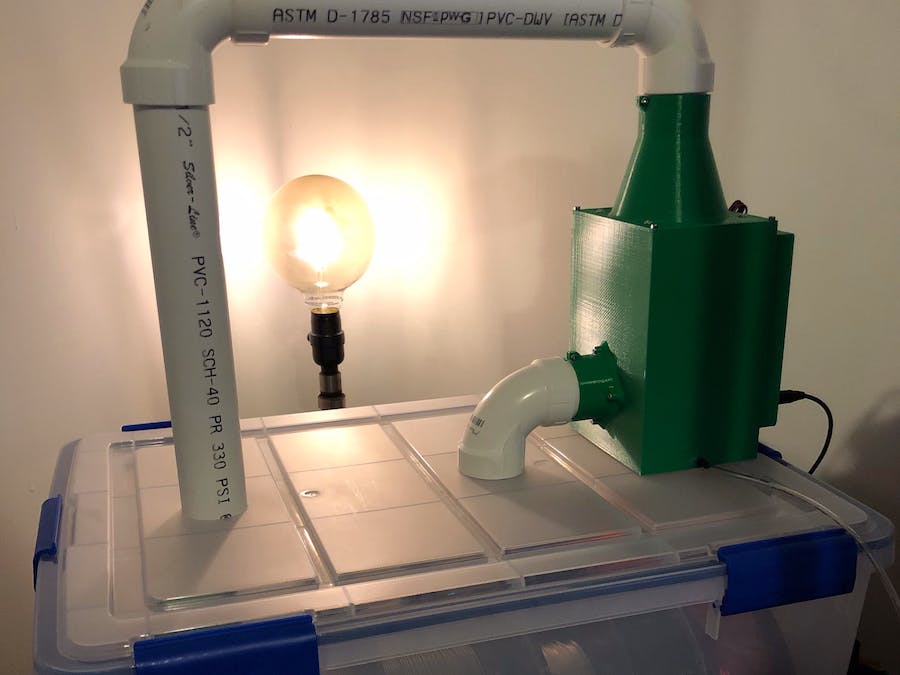 After building this project you should have a fully functioning dehumidifier for your 3D printer dry box to keep your filament dry and ready to use. The dehumidifier works using a Peltier device which transfers heat from one side of the device to the other producing a hot and cold side. The cold side of the device produces condensation thereby removing moisture from the air within the dry box. The Peltier is sandwiched between two heat sinks in which a fan blows across. The fan provides cooling for the hot side of the Peltier while also blowing off built up condensation on the fins of the cold heat sink. The dehumidifier is controlled by two Particle Photons. One Photon controls the Peltier device while the other reads the humidity and temperature inside the dry box. The two photons communicate with one another to determine whether the Peltier should be on or off and whether the power level should be set to one or two (low or high). The high power mode kicks in when the humidity level has reached approximately 30%. At this point further moisture can only be removed from the air by going below freezing. The desired target humidity and other parameters can be set at the top of the code using the predefined variables.

First, cut the original barrel plug off of the power supply and solder on the new high current barrel plug.

Reference the circuit schematic to assemble the electronics. Connectors can be used for the low current portions of the circuit if desired. Note: Insert the rocker switch and high current barrel jack into the electronics enclosure box before attaching these two components to the rest of the circuit. Also ensure that the wires carrying 12V to the photon in the filament box are long enough to reach it by traveling through the outlet air pipe and into the filament box.

Place the Peltier assembly inside its enclosure and fasten with four M3x16 screws. Warning: Tighten screws only until they are snug.

Peltier Assembly Mounted in its Enclosure

Wires Guided Through Cutouts in the Peltier Assembly Enclosure

Attach the side pipe connector to the Peltier assembly enclosure using four M3x10 screws. (WARNING: Only tighten the screws a small amount after first feeling resistance or your will strip the threads. There is only 6mm of engagement here.)

Route air to and from the dehumidifier using 2-1/2" PVC pipe or pipe of equivalent outer diameter. An M3 screw and nut can be used to tighten the clamp onto the pipe.

Screw the hose barb into the drain outlet near the bottom of the Pelter enclosure assembly. Attach the polyurethane hose and route to desired location. Note: Super glue or appropriate sealant may be needed to prevent leaks around the threads on the hose barb. If the hose barb cannot be successfully threaded into the printed part the polyethylene hose can be encouraged to fit into the hole without the barb and held in place with super glue or other.

Hose Barb Secured in the Drain with Drain Tubing Connected

ThingSpeak logs real time humidity and temperature of the dry box as well as the power state of the dehumidifier. The status of the dehumidifier can be checked at anytime from anywhere to ensure that the system is functioning properly. Note: The charts displayed above contain data that was reported every 30 seconds instead of the 5 minute default set in the code. ThingSpeak Page