Learn how to monitor your air quality with some simple off the shelf components. Harness the power of Particle's platform to make it happen.

Learn how to monitor your air quality with some simple off the shelf components. Harness the power of Particle's platform to make it happen. 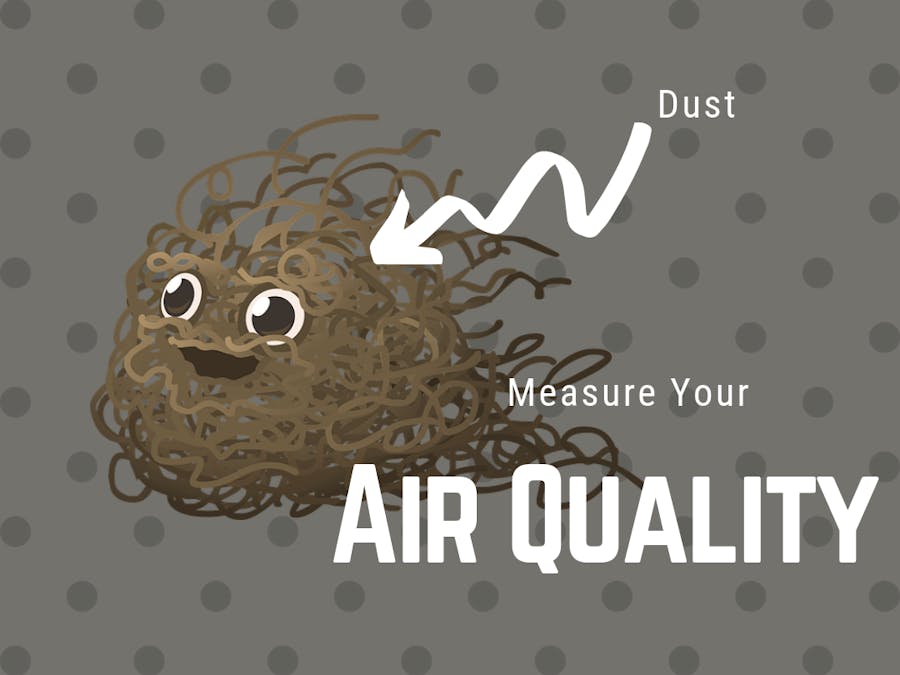 You probably think about it more now that our clean air has turned into a permanent haze across the sky.

One thing you do have control over is the air quality inside your home. In this tutorial, I'll show you how to build an air quality sensor from some off-the-shelf parts.

Everything you need. Nothing you don't.

All the parts needed for this project.

The brains of the operation is a Particle Argon. This project is also compatible with any Particle Mesh board and also anything in the Adafruit Feather footprint.

As for the sensors, the most important is the the Honeywell HPM series PM2.5/PM10 sensor. At a high level, it counts how many particles are flying around in your air and gives you a number based on that information. If you ever see air quality data in a weather app like Weather Underground, that information is based off of a particle measurement that the HPM produces.

Second, there's the AMS CCS811. It measures eC02 and TVOCs (total volatile organic compounds). It's an important data point for indoor air quality. Try placing this sensor in your basement next to your furnace or boiler (if it's not electric) and you'll get some surprising readings when it's running.

Finally, a Silicon Labs Si7021. This little guy has been my go to for combined humidity and temperature readings. It also provides the temperature and C02 readings for the internal calibration of the CCS811.

Here's the full list of ingredients for this IoT stew:

I've included the Fritzing example with the source for this project. Here's a screenshot though:

Note: the original Fritzing diagram was incorrect. Both Vin of the CCS811 and Si7021 should be connected to the 3.3V on the Particle

Particle doesn't have any Fritizing parts so I had to substitute with an Adafruit Feather. So just close your eyes and pretend we're using an Argon..

As for the particle sensor, it's a bit of a mystery how it's hooked up from that diagram. Here's the pinout from the data sheet:

We're most concerned with the 5V, GND, RX and TX pins.

If you did everything right, your setup will look something like this:

If you're curious how I hooked up the HPM sensor here were the steps:

1. Cut the pre-assembled cable in half.

2. Remove all the unneeded wires

3. Solder headers to the individual wires

4. Plug em in to the breadboard

Here's a picture of what the solder job looks like.

I went into further detail on this in the full tutorial.

Setting Up The Firmware

For this project, I'm using Visual Code with the Particle plugins. More on how to set that up here.

The Si7021 is a go-to for humidity and temperature measurements due to its simplicity. The only drawback is that a read to this device, in its simplest form, uses clock stretching.

What does that mean?

Your micro controller is tied up during the time it's waiting for the temperature and humidity data. For this application, it's less critical considering we're taking measurements every minute or two.

If you feel like you're having déjà vu, it's not surprising. Particle uses the same Wiring/Arudino API that we're all familiar with.

The CCS811 has a few more bells and whistles compared to the Si7021. In particular it has an interrupt pin. An interrupt is particularly useful because you can start a measurement, do some stuff, and then return to it later once it's done. No blocking code makes for a happy processor.

The HPM sensor unfortunately is not as nice. It uses a UART interface. In my experience UART is a pain to work with especially when you have a tight state machine. I also had trouble writing commands to it over time.

Leave it on and running.

By default it sends data every 1 second. All you have to do is be there to listen for it. Over time this does degrade the performance of the fan. Honeywell recommends that it be controlled by a switch to preserve the device life. I ended up doing that in the fully integrated version of this project.

The data is only so useful sitting in the micro controller on your table. You gotta get it out somehow!

I serialized everything together in a JSON blob and sent it as a single publish event. There were a few reasons for this I won't go into here.

The creation of the blob is straight forward. Take a look below at the actual code:

I simply took each reading and inserted them into a pre-formatted string. I then sent that string using the Particle.publish command.

The cool thing is, the data won't get sent until all three sensors have finished doing their thing. The one that takes the longest, by far, is the HPM sensor.

So we're pushing data to Particle's backend. Now what?

After some searching, I found one solution that I'll share here: GoogleSheets.

Oooh yes. We're going to directly import the data from this device into Google Sheets.

Here's the play by play:

I’ve based the code originally on the post I found on the subject.

Note: This type of data collection isn’t great for large amounts of data spanning more than a few days. It’s great though for short time trials and tests though! I originally was using IFTTT but the data collection was sporadic. Now it’s quite consistent!

You can see my live example here.

If you've gotten this far. Here's a virtual high five! 🖐

After building one of these you may feel like your time is worth investing elsewhere. Maybe you want to build a cool web backend with fancier charts and algorithms. Maybe even use some machine learning (why not!)

If you want something already assembled and available you should check out my Air Quality Wing for Particle Mesh. (Previously Particle Squared) It has everything here including the ability to switch on and off the HPM particle sensor. You can even run it on batteries! So put that sucker anywhere you want.

For more information you can check it out here.

Air Quality Wing in the flesh.

Oh! I did not forget about the source. Everything for this project and the Air Quality Wing is located on my site here. Go check it out and get started!