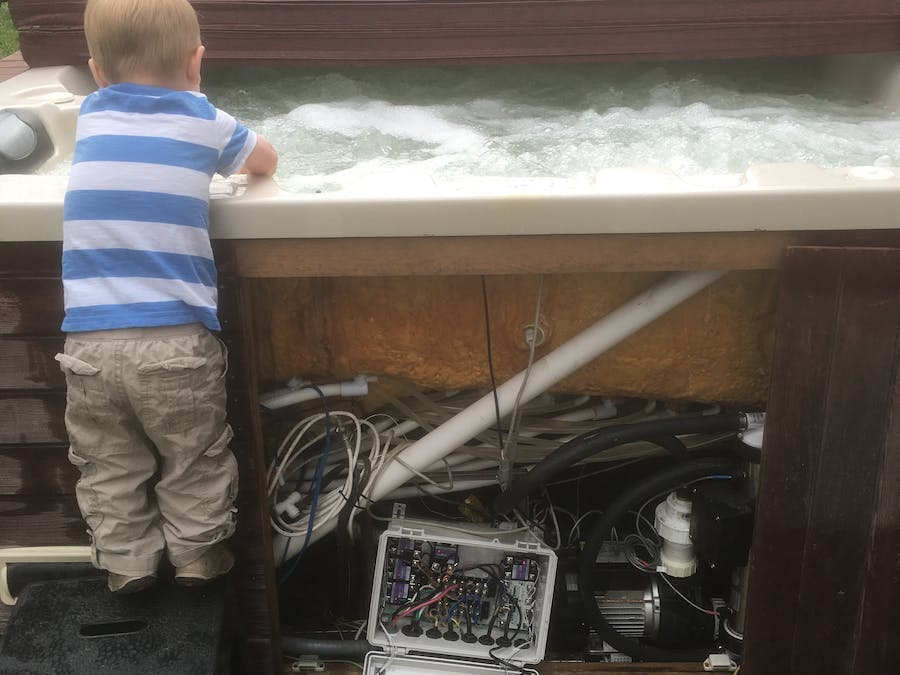 Necessity is the Mother of Invention.  Our hot tub is a necessity.  It's broken. Time to get inventing.

The old hot tub control panel died and what a sad day it was.  The LCD succumbed to corrosion from poor sealing and water ingress.  Little be known to the wife a control system failure was a blessing in disguise. Temperatures could not be set below 59 deg F.  59 is far to hot (expensive to use) for freeze protection.  A new control system could pay for itself in increased energy efficiency.  Also, some the relays had previously been repaired and the entire system was not the greatest of quality.  We can do much better.  At 9600 watts at full tilt, the tub costs about 1$ per hour to operate.

A new control system was implemented using the particle photon.  Control will now be exclusively via the web and have IFTTT capability.  Amazon's Alexa now understands that "alexa trigger hot tub fun" means to turn everything on and set the proper temperature.  Hands free hot tubbin!

Solid state relays were used to interface the particle photon to the hot tub motors. This tub is rather special.  It has 4 water pumps, an air pump, a 6500W heater and an O3 generator.  There are quite a lot of things to operate and control in this tub.  All loads are 240VAC.  As a bonus there is a hydraulically operated TV that pops up when one of the zones is activated.  1080P hot tubbin!

Opto 22 style solid state relays were driven directly from the particle photon pins. Relays were mounted to a 1/8" thick heatsink plate inside the box.  100A relays were used throughout to keep the temperature down though the complete system should only draw about 50A.  A 12V output dual voltage input supply was chosen and attached to the outer door.  The particle photon was attached to a shield shield and then to a screw shield.

The level shifters on the shield shield had to be removed and bypassed.  They did not have enough power to trigger the opto relays.  The photon is capable of driving the relays adequately directly.  This is older hardware I had laying around and not what I would recommend for new builds..  Now nicer screw terminal breakouts exist for the particle. (controleverything.com)  The screw shield has two thermistor connectors and the pullup resistors for the 10K heater thermistors.

The two heater sensors can detect a lack of water and also can detect a circulation pump failure when the heater is on.  These are features the old system did not have.

The heater cell in the hot tub retains its mechanical overheat lockout for safety as well.  The photon is attached to the outer door with velcro as well as the power supply.  The high voltage relays are mounted to the aluminum heatsink in the back of the enclosure.  All wires run through liquid tight compression fittings.  The enclosure is gasketed and much nicer than the original.

Future upgrades will be internal box temperature, humidity and current monitoring.  We should be able to calculate power consumption and $ per hour to operate.  Box humidity can be monitored and make sure there are no leaks or issues in the box.

From analyzing temperature data the existing electric heater increases temperature at a rate of 1 degree Fahrenheit for every 10 minutes.  In the future I plan to add a feature to be able to send the tub a time to be ready.  The tub will analyze the current temperature and predict the time to turn on to be ready at exactly the desired time, further saving money.  The particle is time aware, so this should be easy to implement.

Temperature and control system feedback are implemented through mobicle.io. and IFTTT/Amazon Echo.

The particle photon has a single function "hottub."

This responds to string prefixes that are associated with the command and a postfix that corresponds to the action.

A "P1 T" toggles the pump state.  The mobicle buttons are programmed to act as toggles.  This allows fewer buttons and all controls fit on a single screen.

any other command, including "P1" with no arguments is interpreted as an off.

"Of"f is just that. All outputs off.

The command parser ignores spaces and automatically changes the case to uppercase.  This allows for less strict command control.

A special macro, called "FUN" automatically sets the hot tub to full on and the temperature to 98 degrees.

Alexa has been trained through IFTTT to "trigger hottub fun" to turn everything on.

A new control strategy has been implemented for sleep.  When commanded to sleep, the tub runs the circulating pump for 6 hours, then switches off for 9 hours. back on for 3, off for 9, etc.  This saves 75% on the power bill when in sleep mode.

This  is an example particle photon project for my MEGR3171 class at UNC Charlotte. 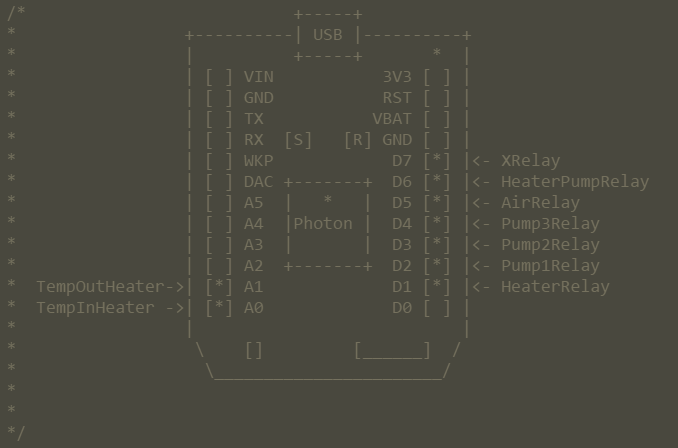