Use two potentiometers to indicate via different colored leds whether the wheel is within two milimeters deviation.

Use two potentiometers to indicate via different colored leds whether the wheel is within two milimeters deviation. 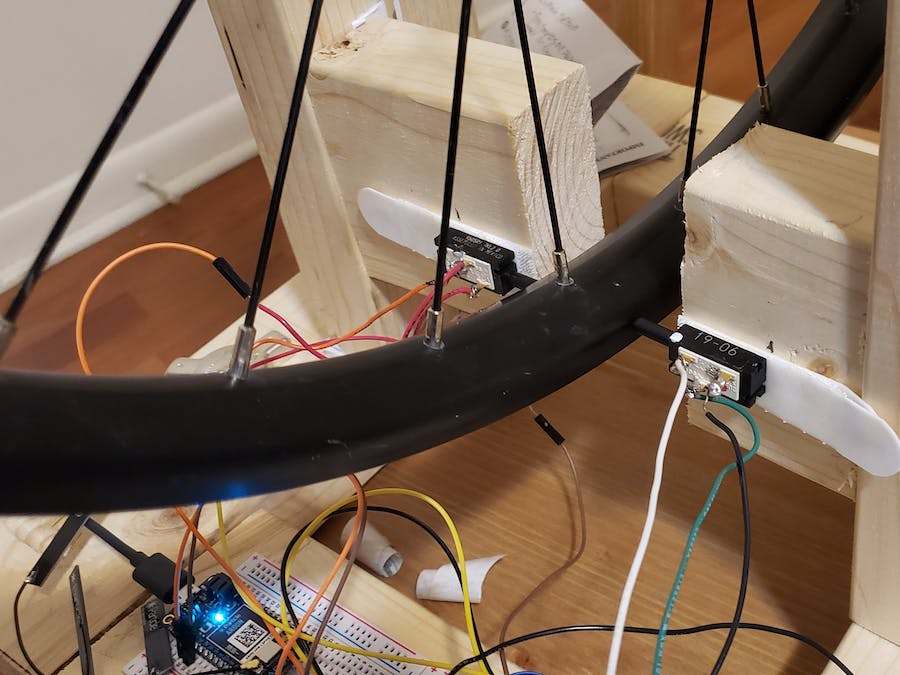 Mountain bike wheels used spokes under large amounts of tension to make the wheel stiff. Most wheels will become deformed due to loosening of spokes and actual deformation of the rim through use. This can lead to unsafe wheels or even the tire rubbing on the frame of the bike. To fix this, you must true the wheel. Truing a wheel entails tightening spokes on either side of the wheel to bring it back in line with the center of the hub. To do this, many bike shops and at-home mechanics use truing stands. These can be makeshift or bought from certain bike maintenance companies. These truing stands use adjustable dials such as micrometers that rub on the rim wherever it deviates too much from the center. Even with a truing stand, truing a wheel may take hours and many people don’t have the time to do it properly.

Our solution to this time-consuming problem was to use two potentiometers to put out a constant and accurate feed of wheel displacement data that the user can use to true the wheel more efficiently. Through the use of indicator LEDs for making major adjustments to the worst areas of the wheel, the wheel can be brought within two millimeters of true. Then, using the data posted to ThingSpeak, the user can take measurements at every spoke to bring the wheel to an almost perfect true.

The inspiration for this project came from one Skyler’s friends from the 49er MTB Club who had taken this class a couple of semesters ago. We wanted to improve upon their design by using two potentiometers instead of one. This meant that we would not need a zeroing function and could in theory correct dents in the rim as well.

Argon 2 is the second of two Argons that take data directly from the potentiometers. Argon 2’s main responsibility is to upload the data to ThingSpeak to create a graph of the alignment of the wheel. It does this by pulling the voltage output by the potentiometers, converting them into displacement, and subtracting one from the other. This function is exactly like Argon 1. However, once the data is converted into the alignment of the wheel, the Argon will publish the data directly as a displacement. Using an integration in the Particle console, this data is sent to the Wheel Displacement ThingSpeak Channel. The data is then graphed using their software.

The third Argon in the chain, Problem_Child, provides the system output for the truing stand through the use of indicator LEDs. When a leftward deviation greater than one millimeter is detected, the blue LED is illuminated, and when there is a rightward deviation of the same magnitude, the red LED is illuminated. When the deviation is within tolerance, the green LED is illuminated. This was accomplished by subscribing the Particle device to three separate events—RedLight, BlueLight, and GreenLight—sending a signal to turn off any other LEDs while lighting the corresponding LED. This eliminated the problem of intermittent blinking, which proved distracting and uncomfortable for the user, allowing each LED to remain lit for the duration that its condition was met.

A previous iteration of the system output had Problem_Child display the numerical system output on a 4-digit 7-segment display, but output could not be achieved. Likewise, attempts to display the output on an LCD screen were fruitless. A further attempt to display a numerical output using a Particle Photon failed after Skyler bricked it. The group elected not to attempt to use a second Photon that was available in light of this failure.