Measuring air quality within a particular region in real-time is an effective way to prevent the unhygienic situation.

Measuring air quality within a particular region in real-time is an effective way to prevent the unhygienic situation. 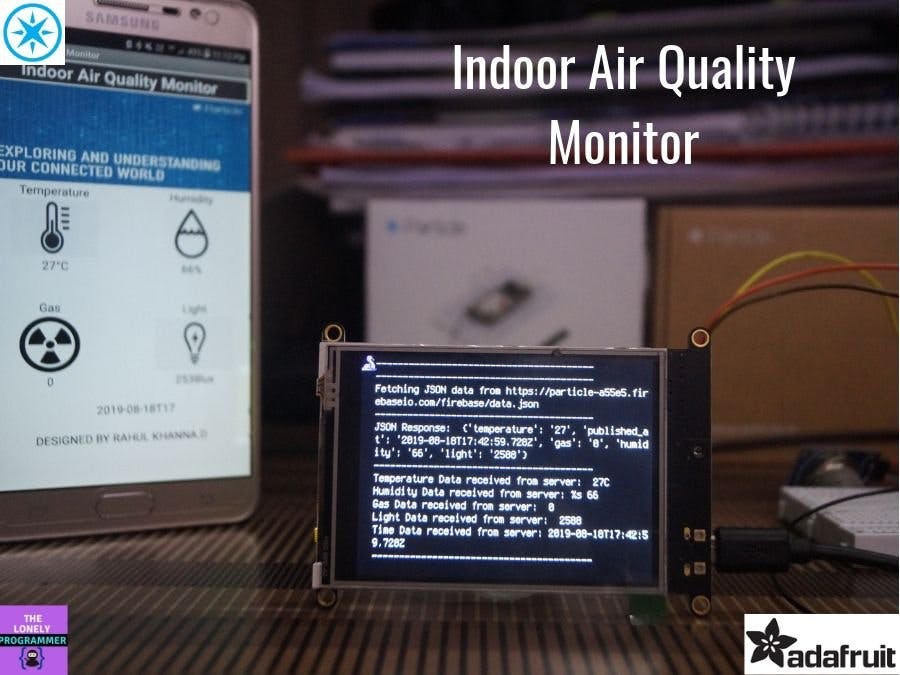 Why Did We Build This?

More than two billion people worldwide continue to depend on solid fuels, including fuels and coal, for their energy needs. Cooking and heating with fuels on open fires or traditional stoves results in high levels of indoor air pollution. Indoor smoke contains a range of health-damaging pollutants, such as small particles and carbon monoxide, and particulate pollution levels may be 20 times higher than accepted guideline values.

The following people are more likely to be affected:

Also, exposure to high levels of air pollution over longer time periods (in months) may be linked to adverse pregnancy outcomes such as reduced birth weight or preterm birth.

We hereby come up with a solution to measure the indoor air conditions and to display the status to the user with GUI.

First of all, I would like to thank Particle for supporting this project with the Argon Kit, I really felt informative using this board and able to learn IoT with its easy interface.

You can purchase the Argon KIT for $35 from Particle store.

Step 1: Getting Started with Argon Kit (Content from Particle)

The Argon is a powerful Wi-Fi enabled development kit that can act as either a standalone Wi-Fi endpoint or Wi-Fi enabled gateway for Particle Mesh networks. It is based on the Nordic nRF52840 and has built-in battery charging circuitry so it’s easy to connect a Li-Po and deploy your local network in minutes.

The Argon is great for connecting existing projects to the Particle Device Cloud or as a gateway to connect an entire group of local endpoints.

What's inside the Box?

The Kit contains an Argon board, a 2.4Ghz antenna, an USB cable, breadboard, LED, and photodiode.

Connect the antenna to the Argon board

Now connect the USB cable and the Blue LED glows.

Create a Particle account to register the Argon device.

Connection to the Particle Device Cloud

Login the Particle account and Press + to add your device.

Now scan the QR sticker from the Argon board and the device will be paired with the account.

Make sure that the Device OS is updated. If there is any OS update, it is recommended to update it using the app.

Since we are not making a mesh network for this project, Click No, Don't use in MESH network. For first 100 devices, the Device cloud is free.

To connect the Argon board to the Device cloud, we will send the Argon Wi-Fi network credentials

After Setting the Wi-Fi credentials, give the Argon a name. Here I've used Air_bacon

Setup is done and we will be able to program the device via over-the-air (OTA).

Once installation is complete, connect the Particle Argon board to the PC.

You can find the serial port in the device manager as shown below. (ArgonSerial COM81)

Now open the Particle Web IDE and upload the Serial-test code to the Argon board.

After uploading the code, open any serial terminal with the following config.

Click the Terminal tab to open the serial port.

By this Step, we can verify whether the serial port is working properly. This can be used to debug at each sections of the code.

The Web IDE is one of the ways you can write, compile, and deploy code to your Particle devices.

Click this link to open the Web IDE on your browser.

Click on Blink an LED on the left side of the page. The code loads on the right pane. The code is very similar to the Arduino programming structure.

The Argon board has three LED. One LED to indicate the Charging status and other two are used for GPIO.

Now we initialize the two LED and we name it as led1, and led2.

Next we configure the LED's as output

In the void loop function, we toggle the LED's alternatively.

Click the lightning bolt icon on the top left of your screen to flash your code to device. As soon as you click, the Particle Device cloud will compile the program source code to a binary file and send it over-the-air (OTA) to the Argon. You can find the green LED blinking fast after flashing and the device is updated.

Check this document from the Particle's documentation.

The Temperature, Humidity, Air Quality, Ambient light, Heat level should be interfaced for this project. So we will see the step by step tutorial to interface with each sensors.

Here we connect the DHT11 temperature and humidity sensor to the digital pin of the Argon board.

The analog pin D2 of Argon is used for the output signal.

The Temperature and the humidity from the DHT11 is calculated and stored in the variables which will be carried to the next section of the project.

Here I interface MQ5 gas sensor which is a generic gas sensor available in the market which is more suited to detect and determine LPG concentrations.

This module has two output possibilities

The digital pin D3 of Argon is used for the Output signal.

LDR is Light Dependent Resistor. LDRs are made from semiconductor materials to enable them to have their light-sensitive properties. There are many types but one material is popular and it is cadmium sulfide (CdS). These LDRs or PHOTO RESISTORS works on the principle of “Photo Conductivity”. Now what this principle says is, whenever light falls on the surface of the LDR (in this case) the conductance of the element increases or in other words, the resistance of the LDR falls when the light falls on the surface of the LDR. This property of the decrease in resistance for the LDR is achieved because it is a property of semiconductor material used on the surface.

The digital pin A0 is used for the Output signal.

The photo transistor is connected as follows:

After connecting all the sensors, the connection looks like this.

Make sure that all the connections are given as per the previous step.

The data acquired by the Particle Argon is transmitted to the Firebase.

Now Click on Develop -> Database from the side menu, Click the Create Database Button and Start the project in Test Mode as shown below.

Enabling the Firebase will direct you to Data and Rules tab, and verify whether the read and write functions are enabled.

Finally Open Project Settings and copy the Web API Key and the other parameters which will be used in the code.

The Firebase is configured to receive the data from the Particle Argon.

Replace the URL from the Firebase account and other option as shown below.

Click the advanced settings and add the following code in the JSON DATA.

Now click Test button to verify whether the data is pushed to Firebase and you can see the success message popup.

Now you can see the data pushed from the Particle cloud to Firebase.

With the above system, we can display the temperate, humidity and light for every time interval.

For printing the sensor data over the serial, we upload the sensor_data.ino firmware to the Argon board.

the output looks similar to the following.

Initially, Data is published to the Particle cloud which will be directed to the Firebase account.

Refer the Integration documentation from the Particle Console for Trigger and Integration response.

On uploading the Trigger integration code, we get the following response.

On minor tweaking, the sensor_data.ino publishes the data to Particle cloud.

We combine all the data into string format and pass it to the Particle cloud.

This data is sent to cloud every 60 seconds.

The Following outputs are recorded.

Now the data is published to the Firebase from the sensors.

I developed an Android app which gets the data from the Firebase and displays it on the app.

I've added the application in the GitHub Repo.

Refer my previous post to get started with Adafruit PyPortal Display.

2. Double-click the reset button on the board to bring up the boardnameBOOT drive.

4. The onboard NeoPixel will turn yellow or blue, indicating the erase has started.

5. After approximately 15 seconds, the mainboard NeoPixel will light up green. On the NeoTrellis M4 this is the first NeoPixel on the grid

6. Double-click the reset button on the board to bring up the boardnameBOOT drive.

7. Drag the appropriate latest release of CircuitPython (https://adafru.it/Amd).uf2 file to the boardnameBOOT drive.It should reboot automatically and you should see CIRCUITPY in your file explorer again.

If the LED flashes red during step 5, it means the erase has failed. Repeat the steps starting with 2.

What we want to avoid is people accidentally sharing their passwords or secret tokens and API keys. So, we designed all our examples to use a secrets.py file, that is in your CIRCUITPY drive, to hold secret/private/custom data. That way you can share your main project without worrying about accidentally sharing private stuff.

Your secrets.py file should look like this:Inside is a Python dictionary named secrets with a line for each entry. Each entry has an entry name (say 'ssid' ) and then a colon to separate it from the entry key 'home ssid' and finally a comma, At a minimum you'll need the ssid and password for your local WiFi setup.

The Sensor data is printed on theAdafruitPyportal.

Give a thumbs up if it really helped you and do follow my channel for interesting projects. :)

Happy to have you subscribed: https://www.youtube.com/channel/UCks-9JSnVb22dlqtMgPjrlg/videos 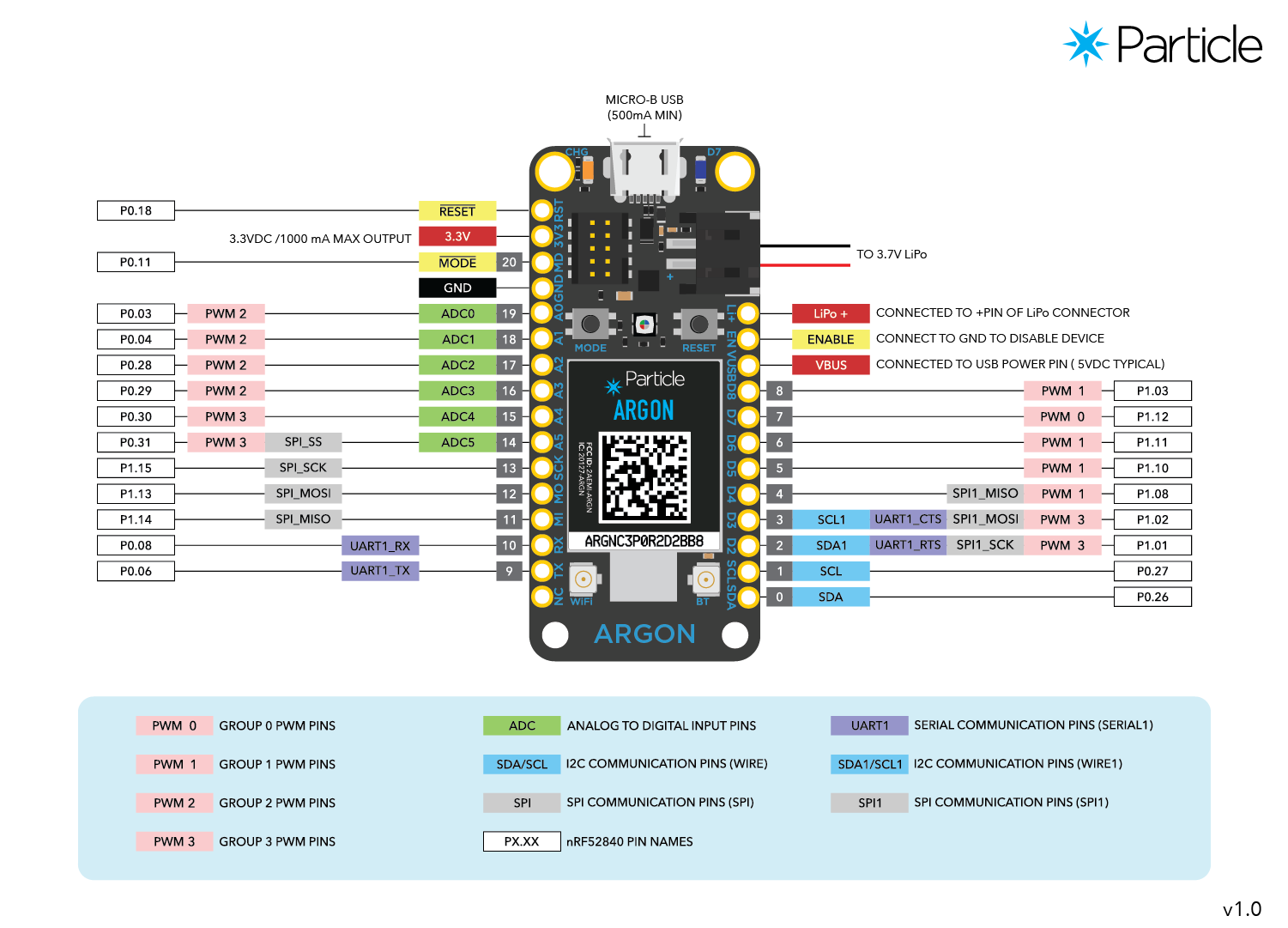 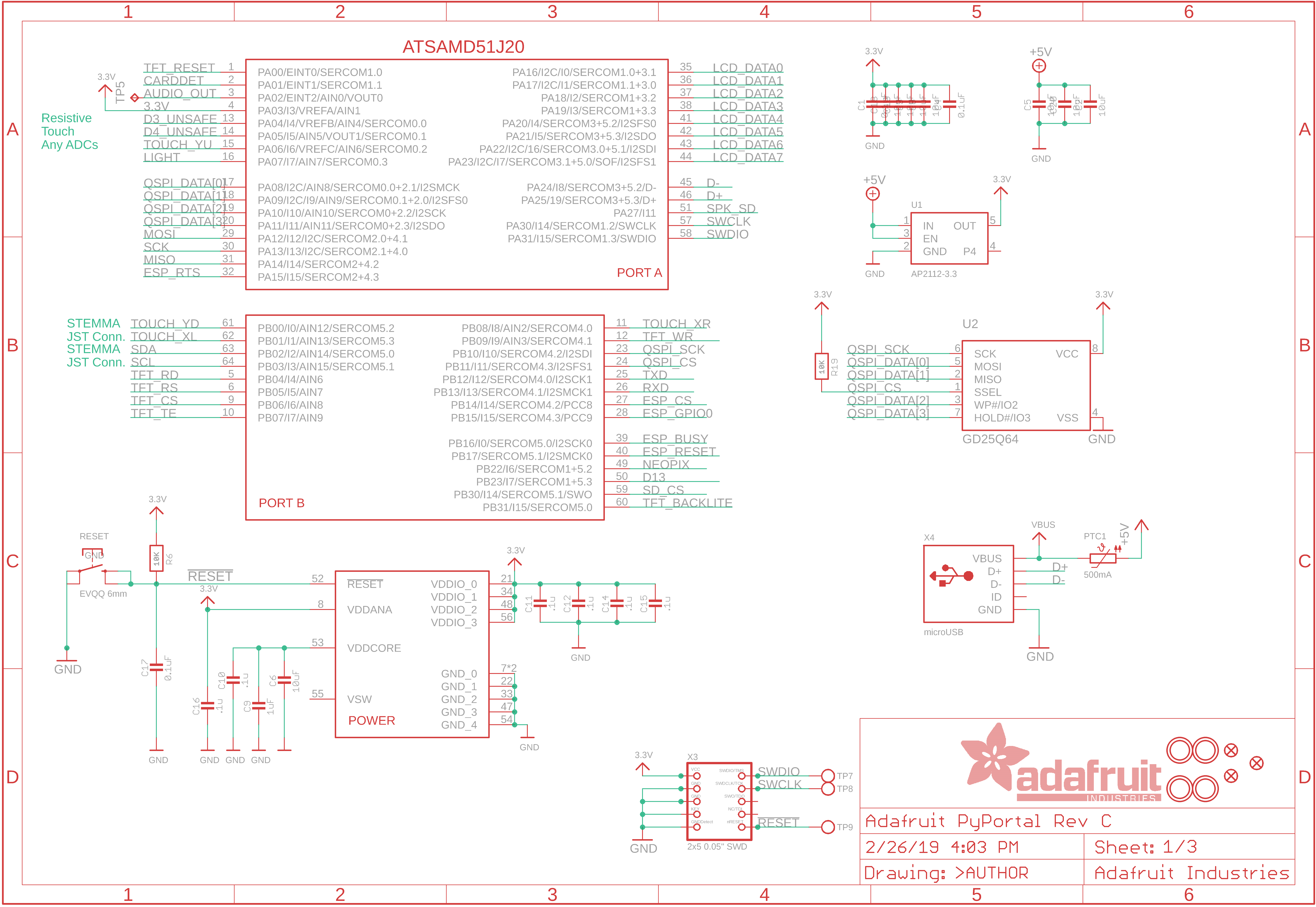 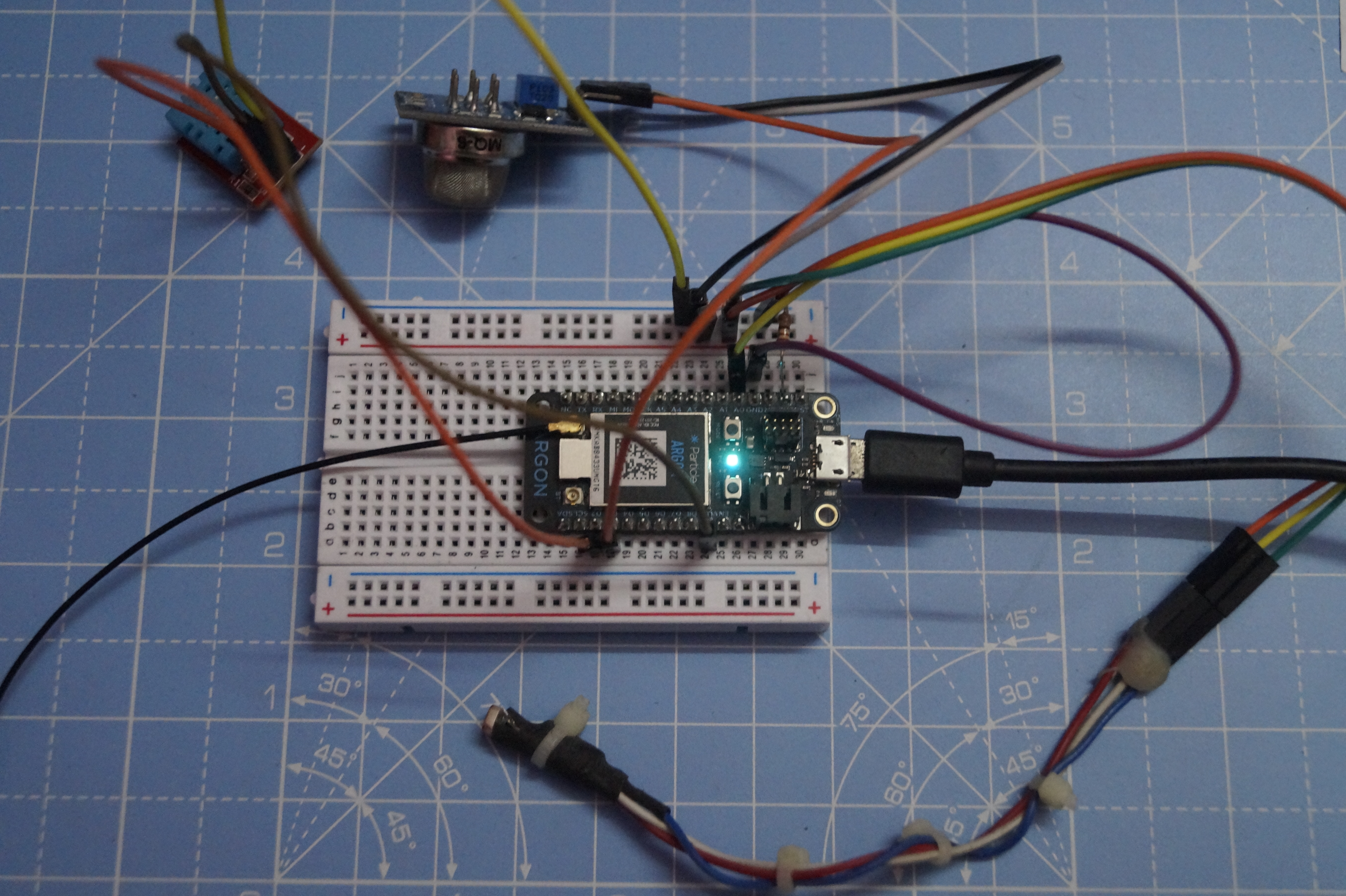 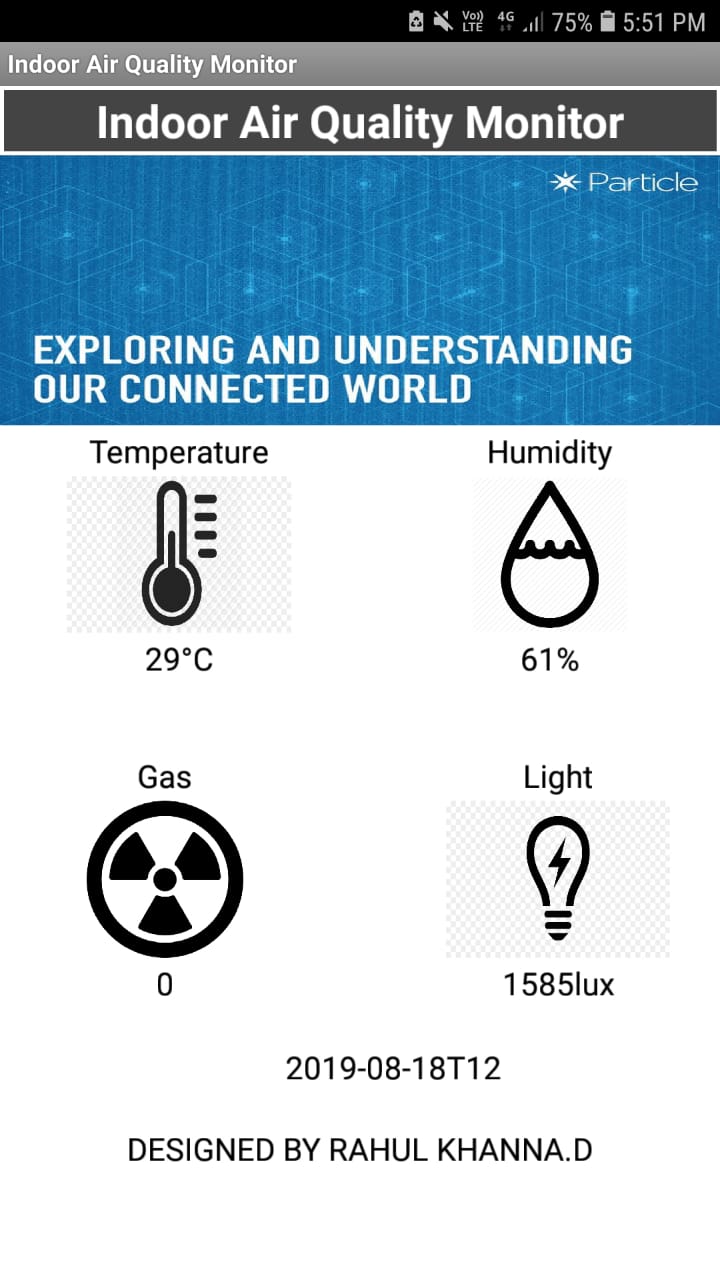 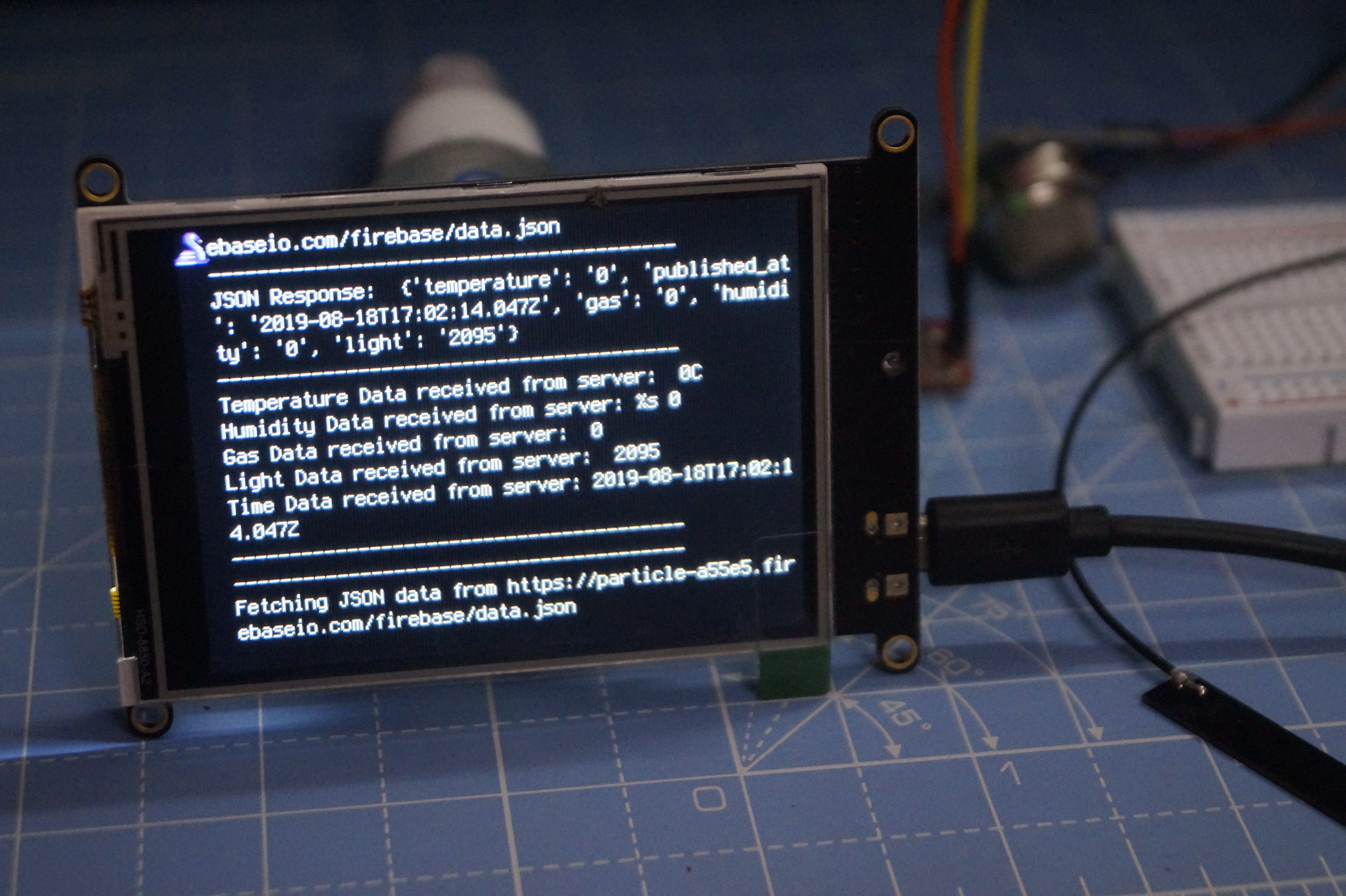