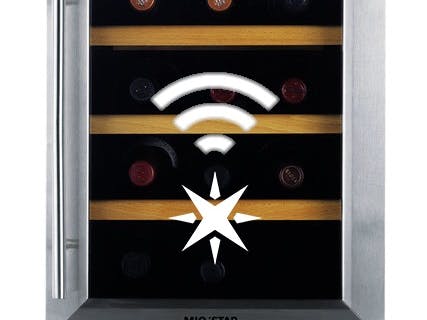 Everything started with my daughters birth and the fact that my mother in law sleeps over once a week... we are really thankful for her looking after our baby once a week!

As the winecooler is in the same room as the guest bed I had to switch it off every week, the problem was that I couldn't switch it on until coming back from work the next day, which I used to forget.

I had a particle core lying around so I've decided to add some IOT functionality to the winecooler.

What features do I need to add?

Ok, some guys told me to buy a timer power outlet, why not?

How did I do it

I've started with a bread board, the particle and 3 transistors.

So I disassembled the front control of the wine cooler to see how it works.

I wired up one transistor per button to the core, and started playing around with the tinker app.

Next thing was to get the power on/off to work, I've started taking a look what happens if I disconnect the power cables going to the front unit, and it seemed that it would stop.

Then just to make sure I took the back part of the wine cooler apart and there I found the main board, so just disconnecting the front didn't feel right. So I went and ordered a relay and connected that to the main power supply.

As it's a SS-Relay, three volts should be enough to control it. After wiring that to the core I've tried it with the tinker app and I was able to power it on and off, without writing a single line of code... from anywhere in the world! Pretty cool.

Then I started wired each button to an analog input to be able to attach an interrupt to know when a button is "pressed", either on the front or by the transistors.

Take a look at the code to see the evolution and read the gotchas section ;-)

Stuff I use which comes for free with the particle:

Every functionality is a one liner!

Integration with IFTTT; Now I've a rule which powers the wine cooler off when my mother in law sleeps over and a rule which powers it on again in the morning! As the spark knows what temperature was set when it was powered off it automatically sets that temp again.