This is a pair of sensors that collect the temperature and humidity of a location, along with the soil moisture of a particular plant.

This is a pair of sensors that collect the temperature and humidity of a location, along with the soil moisture of a particular plant. 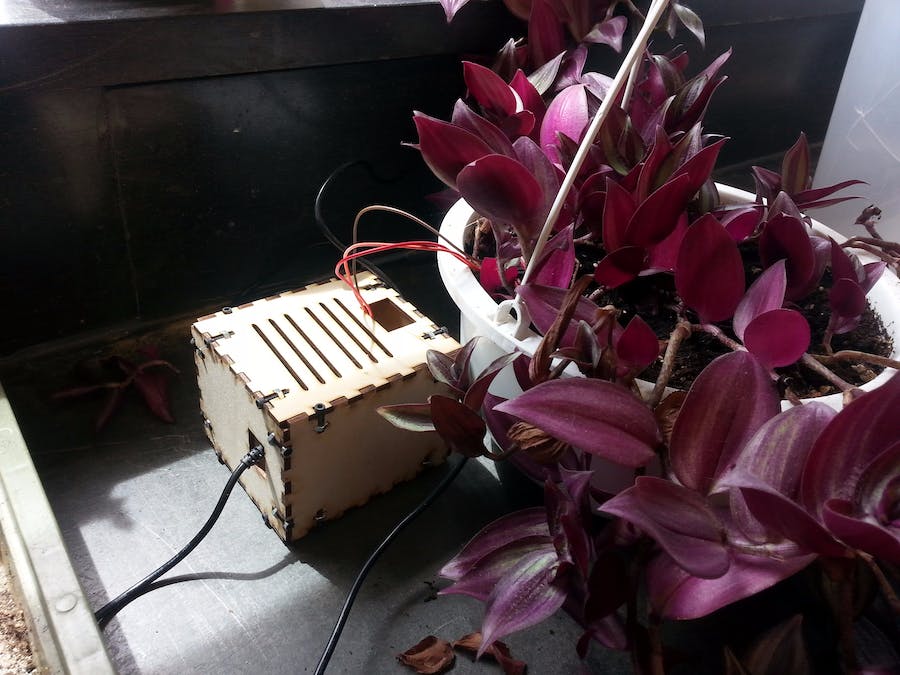 What are you studying?

The phenomenon being observed are the fluctuations in temperature and humidity in the greenhouse and how it may influence the water intake of the plants.

Why is this an interesting question?

We found this phenomena to be interesting to study because while checking out the greenhouse for possible deployment locations we noticed that the temperature there was lower than recommended for most of the plant species there and this could be harmful for the health of most of the plants. With the added data received from the soil moisture sensor, we will be able to observe any relationships between the temperature, humidity, and water levels in the soil.

When is it critical that your device collects data?

It’s critical that our sensor is constantly collecting data, such as when there are people present to water the plants, so as to detect a change in soil moisture. When there’s a change in our data we can determine why it changed and what caused it to change, based on information we’ve gathered from both the data and from the locations themselves. We would like to collect our data at very short intervals but not short enough so as to overwhelm the photon, so at minimum we’d like to pull data every minute or so.

Early stages of the project.
Bottom of the PCB after being soldered.

What are the obstacles that you anticipate (technological, collaboration, access, security, approval, etc)?

Technological, especially if we choose to place the sensors in the greenhouse, due to the close proximity to water, which might damage the sensor. We might also not get access to the greenhouse, since only people with permission from the teacher in charge can go there and even if we can there’s no guarantee that some other student might tamper with our project.

Where did you deploy?

We ended up deploying in the zoology room due to the issue that the photon was not able to connect to the internet while up at the greenhouse. We intend to still study the same phenomena as the horticulture teacher keeps the same plants in her zoology room.

How did you go about building and constructing your 'mote'?

The thought process behind the design of our mote was that first the soil moisture sensor will be kept as far away as possible from the photon to reduce the risk of water damage to our project, so we made the wires of the sensor long and wired it so that it would not face the photon. Then we pulled the sensor through a hole on the far side of the mote, away from the side where the photon would be connected to a power outlet.

The soil moisture sensor while in the soil of the plant.

The main function that needed to be coded was that first, the photon will pull data values coming in from the DHT sensor and the soil moisture sensor. Next, it will assign those values to specific variables and send them to our spreadsheet which would then hold and organize all the values separated by timestamps.

What challenges did you encounter?

A minor challenge we encountered was that we had to use wood and were not able to use clear acrylic as our enclosure material due to our ordering negligence. Acrylic was the desired material due to having a higher resistance to accidental water damage but it didn't really matter too much as long as the photon was far enough from the plant. Some challenges we encountered was that initially our code was not working and that the spreadsheet we were sending our data to was not correctly assigning the data values in the right spaces. This problem was later corrected through the help of our instructors and the issue seemed to be that the same variable was having it’s data pulled twice into multiple locations. Another major problem we had was that the photon was not able to connect to the internet while up in the greenhouse which forced us to change our deployment location.

What did you learn?

We learned that even though you think everything is ready to deploy make sure you investigate any possible problems that could happen. We also learned to use a soil moisture sensor, which only one of us had used before. We were also able to learn how to use a PCB board and how to transfer and solder the electronics onto it. 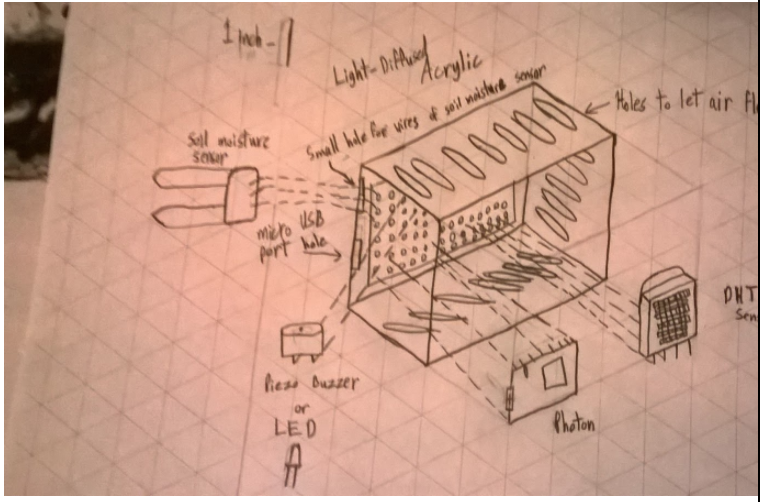 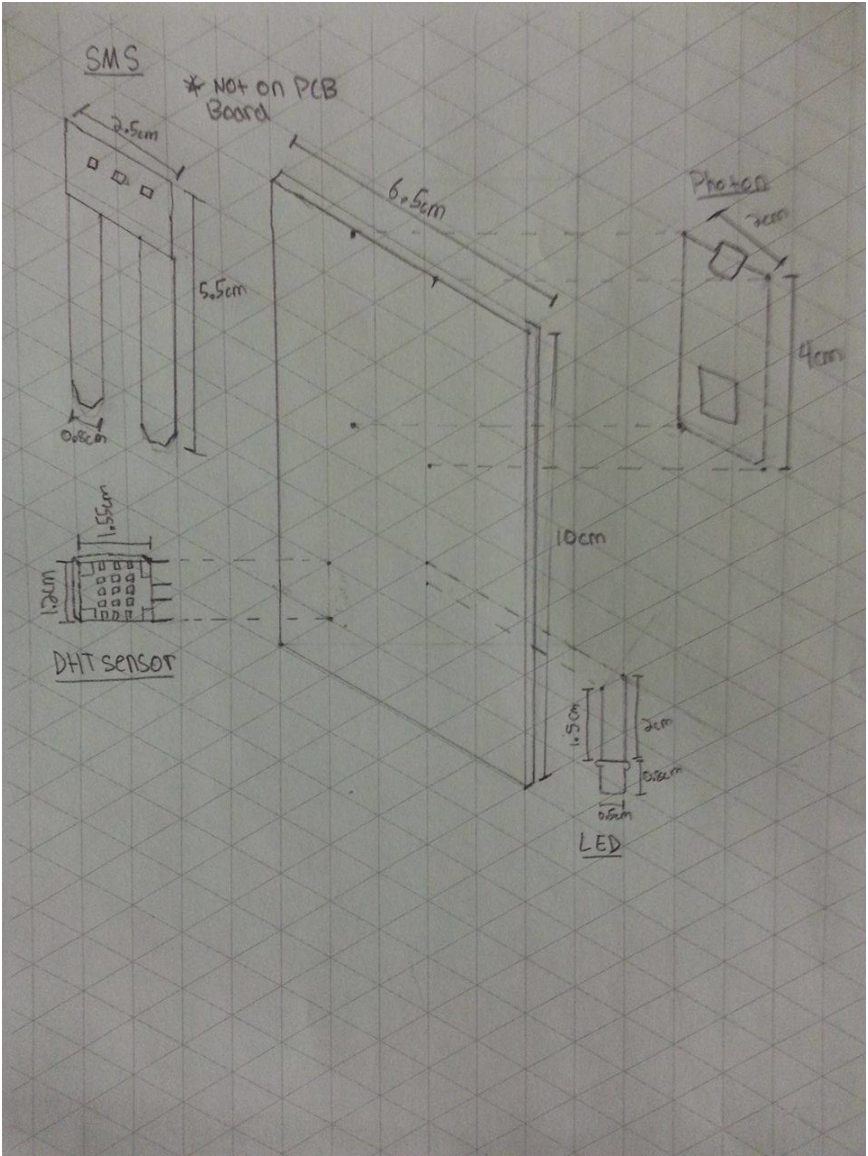 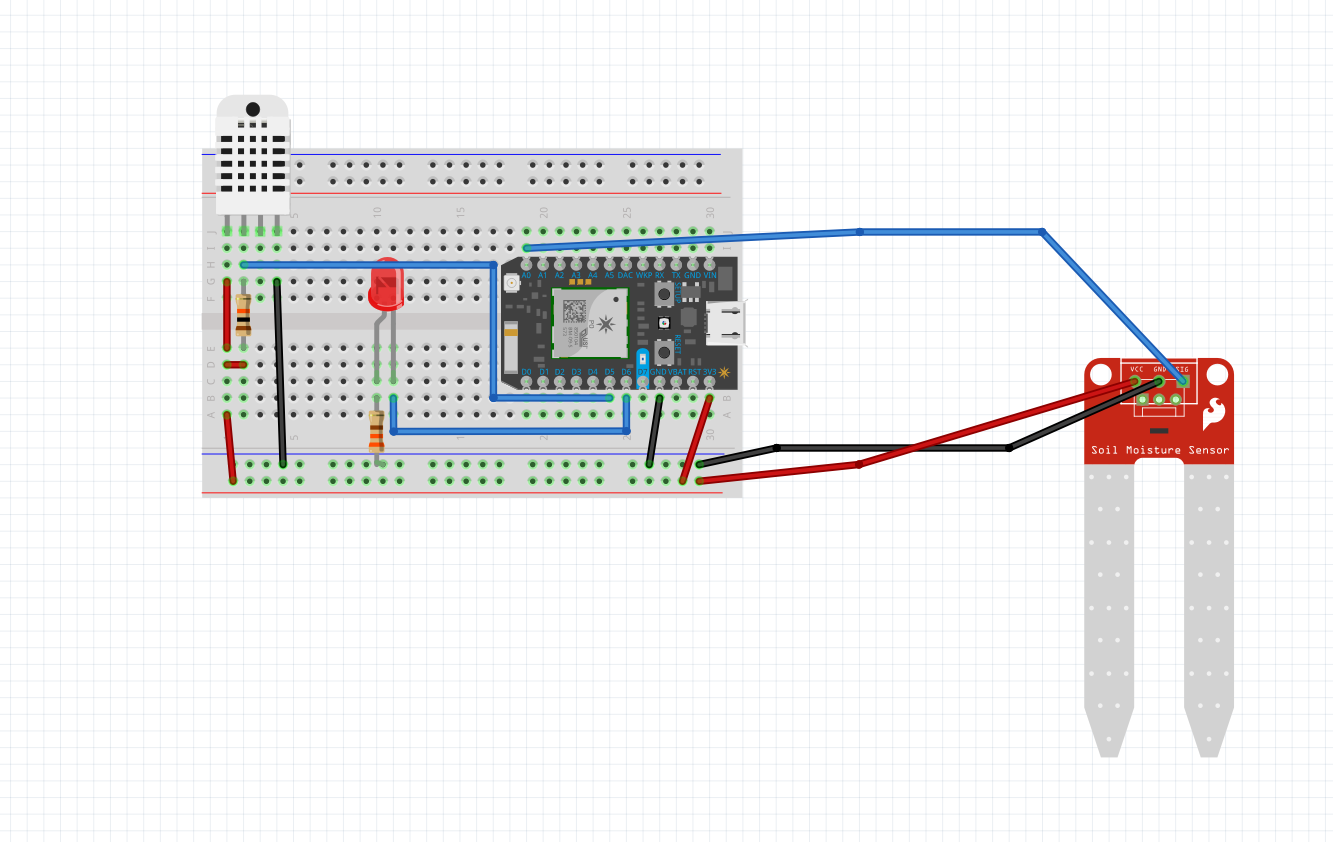