A small-scale replica of the original Herbert Televox robot from the 1920's was a great addition to a presentation on "how to tell stories."

A small-scale replica of the original Herbert Televox robot from the 1920's was a great addition to a presentation on "how to tell stories." 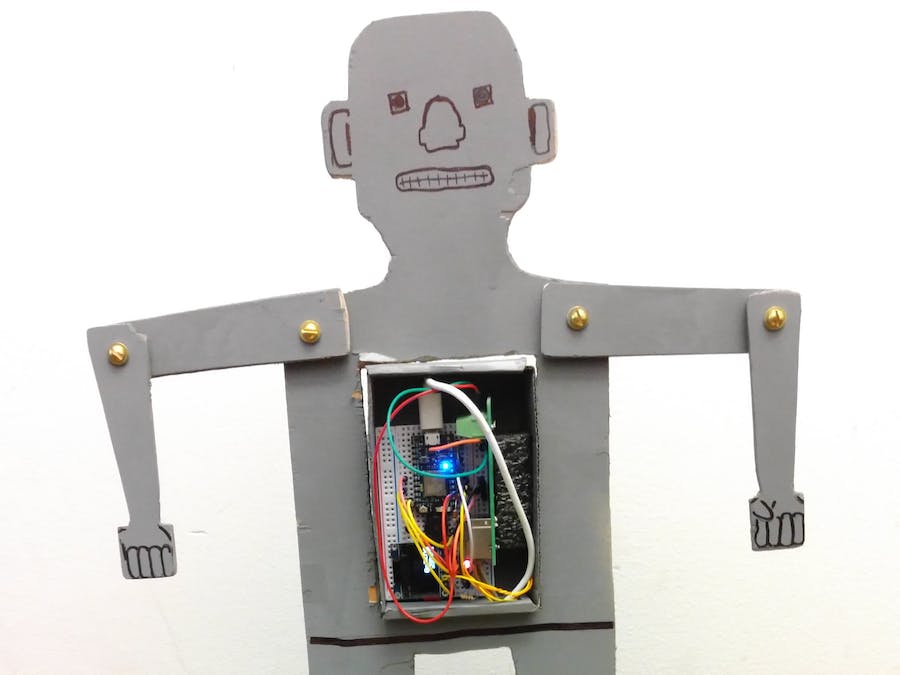 The world's first"robot" was arguably Herbert Televox, built by Westinghouse. At thetime, Herbert's ability to listen to commands over the phone and report backdata was ground-breaking. Herbert Televox itself was really a standard electricbox with a complex assortment of switches, timing and buzzers. The box wasplaced into a robot-shaped cutout when demonstrating its capabilities.

HerbertTelevox. The box in its stomach is an advanced (for the 1920's) control unit;the robot body is simply the 1920's version of cheap plywood.

I built a scalemodel of Herbert Televox for a talk with early-in-career programmers where Iwork. The scale model had the ability to detect a phone being picked up andmeasure the depth of a water reservoir. I wanted a live demo with a phoneconnected to the scale model Herbert Televox, and a water sensor from theHerbert Televox into a little model reservoir. The reservoir is really just asmall glass dish. Then I'd pick up the phone, actually dial some numbers, andthen Herbert Televox would buzz once, twice, or three times based on thereservoir depth.

What I needed for a demo

To power the smartsof my Herbert Televox I used a Particle Photon, an Arduino-basedmicrocontroller with Wi-Fi capability. After struggling with debugging withjust an LED, I added a small Adafruit_SSD1306 OLED display. In order that Iadded them, the Herbert Televox abilities are:

The Arduino base ofthe Particle Photon makes some of this very easy. For example, it was easy toset up an analog to digital convert (ADC) for the phone off-hook detection. Butthe nature of programming the Arduino made handling timing awkward; I'll showmy solution.

Connecting a phone and writing to an OLED

Diagram of a rotary phone showing the handset, the cradle in which it's placed, and theon-hook/off-hook switch

Although a phone jack is large enough for 6 wires, and is normally wired up with four wires (theinner four), a classic rotary phone works off of just two wires: one red, and the other green. The two wires form a loop with a certain resistance. Every operation of the phone (taking the handset off-hook, dialing, and talking) will change the resistance across the wires in a way that can be easily detected by the Arduino.

To connect my demo phone to the Particle Photon Arduino, I used a RJ11right-angle jack breakout board which I bought from Amazon, but it's also available for less straight from the maker along with an enticing set of other boards. I plugged the phone into the jack and ran some wires from the nice terminal strips on the breakout board to the Arduino.

In particular, the connections are

The resistance oft he phone and the fixed 1K resistor forms a voltage divider that runs from Vcc to ground. When the phone is on-hook, it has a rather high resistance so thatt he voltage at A0 will be close to Vcc and an AnalogRead of the pin will return4096 (the maximum value). When the phone is off-hook AnalogRead of pin A0 will read about 1680 with a variation of about 50.

I get a speed to flash the blue LED based on the phone analog value; I use a constant 64 to make for a "nice" flash speed (not too fast, not too slow). This value was picked based on observation.

After mucking around trying to debug the analog values using just the LED flashes, I got smart and wired up an OLED so that I'd get a little display. This was super useful; debugging these microcontrollers without a decent debugger is pretty painful. On each loop, I erase the OLED and print the phone analog reading; that's how I know the exact range of analog readings for the phone.

The water sensor is just a length of insulated twisted-pair telephone wire (I snagged 25 feet of50-pair telephone wire from a dumpster 20 years ago, and have been using it as my go-to wire ever since). I scraped off 1-cm long sections of insulation in three places: at the very end and then twice more spaced apart by about 3 cm. Then I taped the wires together so that the bare sections are right next to each other just a few millimeters apart.

This crude sensor was then read in by analog pin A1 in the exact same way that the phone analog value is read: the water sensor is part of a voltage divider. One of the water sensor wires is at ground, the other is the mid-point, and then there's a resistor from the mid-point to Vcc. I used a 1K resistor because it was supplied as part of the Photon Particle kit. I then wrote the resulting values into the OLED debugging screen, and discovered that it wasn’t nearly sensitive enough.

The easy way to pick a fixed resistor for these simple voltage dividers is to use a resistor that's approximately the same as the variable resistance that you're measuring. For the water sensor, 1K was much too low, so I scrounged up a 10K resistor from a different kit.

Once I had a set of analog reading from the water sensor that seemed to be far enough apart that they would be clearly distinguished, I simply dipped and undipped the water sensor to get some useable split-points and then set an nbuzz variable to be the number of buzzes that I wanted.

The Photon Particle kit I have includes a small buzzer. I followed the instructions, connecting it to digital pin D0 and initializing that pin with the pinMode function to be an OUTPUT pin. There are two commands, tone and noTone to turn the buzzer on and off. After a few experiments, I settled for buzzing the buzzer at 40 Hz for 200 milliseconds with a 500 millisecond gap between them. At the same time I set up a didBeepvariable which starts at 0 (false) and is set to 1 (true) when I beep. The variable is also set back to 0 whenever the phone is on-hook. This ensures thatI only beep once per off-hook event.

It's not good just to buzz as soon as the phone is picked up. For an effective demo, the presenter will need to pick up the phone, dial, and then pause, all while explaining what the device will do. I solved this problem with two variables: the hookTimeDelta time count that's increased by the time value passed in to each delay()function, and an didBeep variable that says whether I've done the beep for any particular off-hook event.

The actual code for deciding to buzz is then just

This will guaranteethat the buzzes only happen once, and after a delay. Dialing is a different story. I decided against actually detecting the phone dial digits for the much simpler detection of whether the phone is dialing at all. Detecting the phone dialing is trivial: when rotary (technical: pulse-dial) phones are dialing, internally the phone is just going on and off hook. The existing code that detects on and off hook is sufficient to pause the buzzer while dialing.

From a presenter point of view, the demo involves picking up the handset and talking while dialing. So long as the dialing keeps happing, the buzzing is delayed. The presenter can choose when to stop dialing and let the buzzing happen!

The good and the bad

Some less than goodparts:

Herbert Televox was an awesome robot, even if it was just the 1920's version of cheap plywood. Making a modern version was an effective prop for a bigger presentation.

You can see the original Herbert Televox at the http://www.themansfieldmuseum.com/

2 projects • 3 followers
C# Programmer for many years, and a lover of all things IOT and Bluetooth.
ContactContact