A visual doorbell for the deaf and hard of hearing which provides visual and audio (for hearing) notifications.

A visual doorbell for the deaf and hard of hearing which provides visual and audio (for hearing) notifications.

Last year, I took up sign language classes to learn the Singapore sign language and have a better understanding of the deaf community during my classes I had shared with my instructor about some of the projects I had worked on while I was studying at my university. A few weeks after the completion of the classes, my instructor Alfred, contacted me for help regarding a problem.

He shared about an issue which he was facing at his newly acquired HDB-term for public housing in Singapore- apartment. He explained to me that the doorbells existing smart doorbells in the market are quite expensive and not really catered to the needs of the deaf. So he was willing to experiment on a cheaper alternative and needed my help. He already had fixed Philips Hue Lights throughout his studio apartment (living room, entrance, bedroom and bathroom). I had to figure out a way to integrate with thePhilips Hue lights-thankfully they have an open API which allows for easy integration. So here is how it went:

I proposed a solution using where the bell triggers an off-the-shelf bell (MK Wired Battery Operated Melody Door Chime) and Particle Photon at the same time. The door chime comes with 16 predefined melodies will be used to alert hearing guests of visitors at the door. The Particle Photon will connect to the Philips Hue and provide visual alerts for Alfred. The door chime would be placed in the kitchen as HDB apartments have existing cabling from the switch button at the entrance to the kitchen ceiling.

When the switch is depressed, it will trigger the MK chime and at the same time trigger the Photon. The Photon will in turn blink the Philips Hue lights throughout the entire home. I could have used a LIPO battery but this would require additional components such as a LiPO charger. Moreover the circuit would be at the ceiling. So I just tapped on the power from the MK chime which was powered by 3 x 1.5V AA batteries(as shown below).

Connection with the MK Chime

Initial problems I was facing before setting up the circuit:

Problems after setting up the circuit

During first trial, the batteries drained immediately and I realized that when the WiFi router was turned off, the photon was always looking for the router which was pre-configured. Another issue was with my code which didn't make the photon go to sleep if there wasn't an router found within a specified time-frame. Lastly, IFTTT's delay and unreliability when linking up the Photon with the Philips hue was unacceptable(took more than 35 seconds or at times, there was not output at all).

Note: Troubleshooting link between Particle and IFTTT can be done at : https://console.particle.io/

Finally with the help of Kenneth a Particle expert, I managed to connect to the Hue Bridge locally without using IFTTT which had caused unnecessary delays. The manipulation of lights were done using HTTP requests to the local Philips Hue Bridge.

To link up the Photon with the Philips Hue bridge, use the guide at this GitHub project page:

The documentation provided at the following link(developer account needed) can be used to customize the colors and patterns of the lights: https://developers.meethue.com/documentation/lights-api#16_set_light_state

There is a slight delay in the trigger of the lights as the photon has to switch on from sleep mode and connect to the local wireless router. This is definitely shorter than the delay using IFTTT(about 6-7 seconds).

What could I have improved or should explore in future?

Send alerts via other means:

Special thanks to Alfred Yeo and Kenneth for your support in this mini-project!

Feel free to leave your comments on how I could have improved the setup. Please share other alternatives if any exists as this could be beneficial for the deaf community. 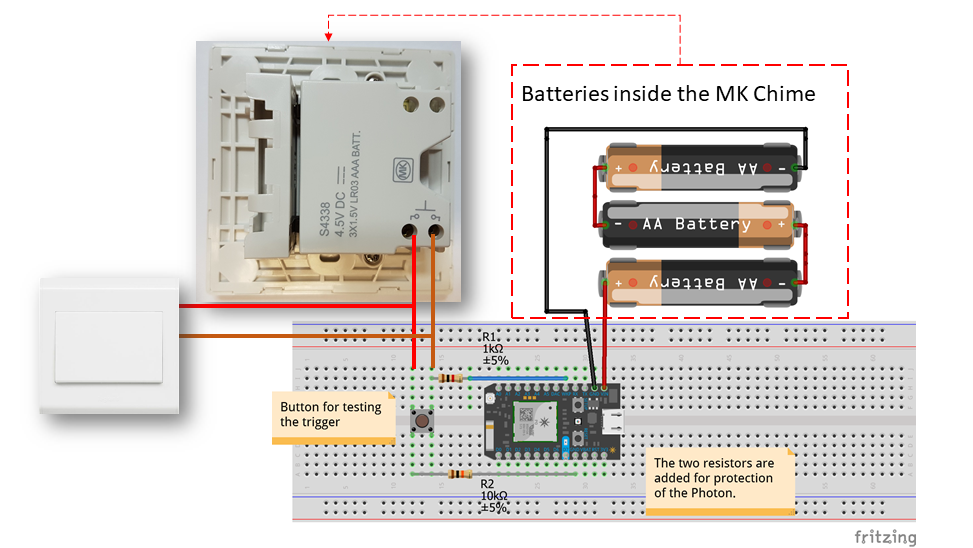 0 projects • 0 followers
ContactContact
Thanks to fsyth.