This project uses the Particle board to sense the distance from the rear of the vehicle to another object nearby when parking.

This project uses the Particle board to sense the distance from the rear of the vehicle to another object nearby when parking. 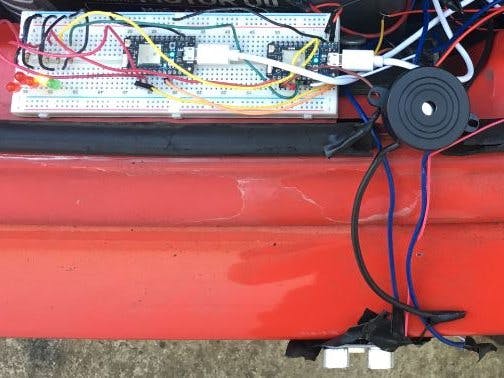 This project uses the Particle IO board over WiFi to create an independent parking sensor that can be easily retrofitted into any vehicle that did not come with them from the factory. The Particle board will communicate with ultrasonic sensors placed on the vehicle. These sensors will relay back to the IO the distance to nearest object, and then alert the driver. LED lights and variably changing beeps will let the driver know how far he/she is from the object behind them when parking.

Particle 1 will relieve the data from the ultrasonic sensors and trigger the LED lights in order green, yellow, red, based on the calculated distance using the ultrasonic sensor data. This information will be sent to the second Particle board and once the vehicle has reached the pre-determined closest distance threshold, Particle 2 will trigger two more flashing red LED's and a beeping buzzer.

For the purposes of this project, the apparatus is setup differently. We also recorded a video showing the board directly next to the sensor to show simultaneous functionality.

The following pictures show the apparatus setup and voltage regulator dropping voltage from 12V car battery supply to 3.3V that the Photon runs on.

To get a live graph of the number of times the vehicle is within the closest distance threshold we used ThingSpeak. In order to use ThingSpeak we setup a Webhook in the Particle console, as shown in the images below, that is signaled by an event published by photon 1, and in response sends a signal to ThingSpeak. The settings for the ThingSpeak channel that receives the information and puts it into a live graph is shown in the images below as well. 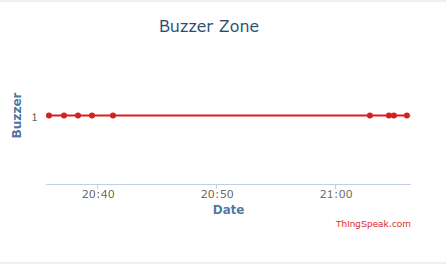