A contribution to the Internet of Plants.

A contribution to the Internet of Plants. 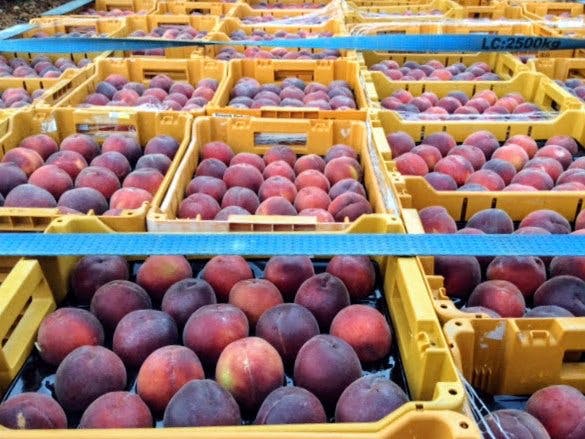 We will show you here how you can build an irrigation system for your farm.

Mark has 5Ha of peaches in the Perth Hills in Western Australia. The trees are planted @1M *5M on an Open Tatura system.

Water is supplied via a single line per row of2.4 L/h pressure compensated drip line @ 0.3M spacing. 30 minutes of irrigation is equivalent to 1mm of rain.

Mark started photonising his irrigation system a year before asking Gustavo to do the programming. He was controlling it manually using the Blynk app and Particle's Tinker. Every time the soil moisture would go under a certain value, Mark would turn an irrigating valve on from his phone or iPad for a period of time.

When he decided the hardware was robust enough and ready for prime time, he contacted me for providing the automation and visualization parts. We joined forces and this project is the result of our team effort.

We hope you enjoy it and find it useful!

The system consists of 20 zones, each with its own Particle Photon (the microcontroller/the brain). Each Photon is connected to a valve and a moisture sensor. The valve opens the water to irrigate the trees and the moisture sensor reads the moisture of the soil.

By default, the system irrigates 15 minutes and then rests for half an hour.

Soil moisture and valve status as a function of time

The amount of time the system is irrigating per day is calculated and then historical data for the last 7 days is kept. This is graphed on Ubidots as well:

You can have a look at the live dashboard Mark is using every day here:

Oh how I wish I could embed the live dashboard here.

Each Particle Photon is mounted on a Particle relay shield. Relays 1 and 2 (connected to digital outputs D3 and D4 respectively) control the open and close mechanism of the valve. By providing a pulse of around 120 milliseconds on them, we can open or close the valve.

The moisture sensor is a VH400 from Vegetronix. This probe measures the dielectric constant of the soil using transmission line techniques, so it is insensitive to water salinity, and will not corrode over time as do conductivity based probes. It is connected to analog input A0 on the Photon. The sensor was placed vertically, with the top 5cM below ground, and a dripper directly on top.

The soil moisture sensor from Vegetronix

The soil moisture sensor power is wired to the battery and the output to A0, Relay 1&2 are wired NC battery+, NO wired - The irrigation valve wired to the commons of relay 1 &2. Two momentary PCB switches are mounted on the relay board connecting the +5V to the relay 1&2 activation pads for manual control and troubleshooting.

Most of the Photons require external antennas. The Flex Antenna does the job for most of them but some require bigger antennas. An example of this an be observed on the following picture, where a 12dB panel antenna is connected to a photon that is 400 meters away from the access point:

A 12dB panel antenna
See that Photon far away? Yeah, me neither :)
A 3 Meters bit of irrigation PVC with a 12 dB flat panel antenna on top

To save power, the software was developed to read the moisture sensor every 5 seconds, run its main loop cycle 10 times per second, and publish information to the dashboard in the Ubidots cloud every 20 minutes.

The behavior of the system was modeled using a Finite State Machine, which are wonderful at keeping the code clean and implementing the sequential steps required for making the irrigation work.

Here's how it works:

When the system powers on, the finite state machine (FSM from now on) starts on the initState. After 10 seconds, it automatically transitions to the idleState.

In the restState, the system waits a while (30 minutes by default) until the soil has absorbed the water. The system then transitions to the idleState and the cycle repeats.

Finite State Machine of one of the valves

And this is the original plan:

we can agree that the FSM looks better in plantUML :)

The user can adapt the system to their need. From Porter or the Particle 2.0 app they can:

Here's a screenshot of Porter:

The settings in Porter

The user can check the status of the system, the current moisture of the soil as reported by the sensor:

Status of the system

The user can also check the history of each zone - the system keeps in EEPROM (non-volatile memory) how much time per day the valve was open every day for the last seven days. This is a screenshot, you can observe ValveOnToday, ValveOn-1 (currently named onYesterday), ValveOn-2 (currently named on2daysAgo - the day before yesterday), and so on:

Data for the last week is kept by the system

How to publish data securely to Ubidots

To store data securely to ubidots, we used a webhook hitting the Ubidots HTTPS API. From the Particle docs:

Webhooks are a simple and flexible way to send data from your Particle devices to other apps and services around the Internet. Webhooks bridge the gap between the physical and the digital world, helping you get your data where you need it to be.

You could use a webhook to save valuable information in a database, visualize data being read from a sensor, send the latest weather report to your device, trigger a payment, send a text message, and so much more!

This is how a webhook comes in play in the system at hand:

We require only one webhook for the whole system, since all photons use the same one. Every time there is a Particle.publish() statement in the code, the webhook is triggered and the pertinent data is sent to Ubidots.

This is the webhook information:

How to create dashboards on Ubidots

We will describe here how to create a dashboard on Ubidots. Steps 1 through 9 deal with adding moisture and threshold values to an Ubidots line chart, and then steps 10 through 13 deal with adding the status of the valve.

STEP 1: Get an account here. Ubidots makes it simple to get you up and running since they offer free plans.

STEP 2: Create your first dashboard by hitting the Dashboard tab on top and then hitting the yellow + to add a dashboard.

STEP 3: Optional - if you had created a dashboard already, make sure it's unlocked

Make sure your dashboard is unlocked

STEP 4: Add a new widget (note the button on the top right corner):

STEP 5: In the next screen, select chart -> line chart:

Select Chart and then Line chart

STEP 7: Repeat only step 6, but now for the threshold variable (for the photon that you wrote down).

STEP 9: Don't forget to change title of the chart to the name of the Photon you wrote down in a previous step.

Moisture and threshold variables are added to the line chart now. Let's continue with the valve status. The valve status requires a workaround since is a value that ranges from 0 to 1. If we graph it as is (we have tried) you won't see much since moisture values are 3 orders of magnitude higher. So, we simply multiply it by 3500 or 4000, using a variable that Ubidots calls derived. So let's create this variable now:

STEP 10: Hit Sources on top of the page then select the Photon we are dealing with (the one you wrote down):

STEP 12: On the popup that opens, hit Insert variable, select your photon again, then select the valvestatus variable. On the text field, multiply it by 3500 (you have to enter *3500) - this is an arbitrary value that we selected but you can modify to show taller or shorter the value on the graph:

STEP 13: Hit on Create and you are done.

You should now see something like this chart (when the system is working):

The system was initiated late Spring {Nov} 2016 and worked thru the long dry Summer. Peach yield and quality was excellent with no signs of stress on the trees or the grower. Water use was ½ to ⅓ of a standard program based on evaporation, several thousand dollars of electricity was saved.

We put a lot of effort in documenting the different parts and components, so we certainly hope you find value in this write-up. Feel free to respect it and/or check Gustavo's other projects here.

Leave a comment below if you struggle with something, maybe we can figure it out together.

If you require professional help with your projects, don't hesitate to write me a line about your needs at gusgonnet@gmail.com. Thank you! 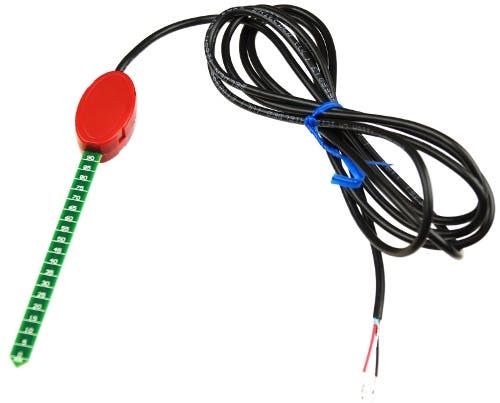 0 projects • 5 followers
I have been growing food products for sale since I was 10. Have been orcharding for near 40 years, growing peaches and cherries.
ContactContact