Automated pet food dispenser to feed our pets when we are not at home by using an IoT device.

Automated pet food dispenser to feed our pets when we are not at home by using an IoT device. 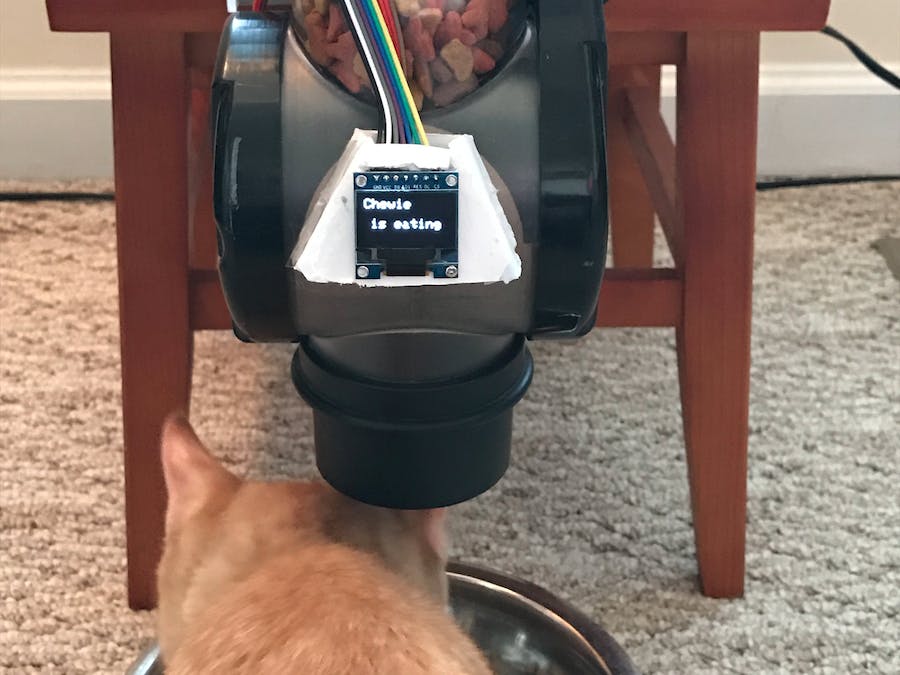 From the beginning of the IOT-project, our goal was to think if an invention that would benefit pet owners such as ourselves. We started thinking about what problems we were facing and a solution to fix them. After discussing so many ideas, we came to the conclusion that since both of us have pets at home, an automated pet feeder would be a beneficial project. Whenever we go to work or are away on vacation, we always end up paying so much money for pet sitters to feed our pets. We realized that adapting a pet feeder to an IOT application would not only solve our problem but would also benefit other pet owners.

The goal from doing this project was to build an automated pet food dispenser to feed our pets when we are not at home by using an IOT device. The micro-controller chosen for this project was a Particle Photon. Two Particle maker kits were purchased for this project. The mobicle app development website: https://learn.controleverything.com/ was used on our smart phones to activate the Photons on the pet feeder and picture frame. The commands to the pet feeder were also displayed on a shadow box frame. The OLED display was used to provide analytics and information about the habits of the pets. When no activity was present at the dispenser, the display is a clock. When the command is sent to activate the feed lever, the display reads “Chewie was Fed”. A PIR sensor is mounted on the dispenser to detect motion at the food bowl. When the sensor is triggered, the display reads “Chewie is eating”. When the motion sensor is triggered it sends a counted variable to the Things Speak IOT Analytic website and graphs the activity. Things Speak was used to track how many times the pets were fed per day.

The housing for the OLED display also contained the PIR sensor. A box was built to shroud the triggering of the PIR sensor from any heat activity that was not from the pet at the food bowl. This improved the accuracy of the sensor readings.

The first particle Photon was placed on a mini breadboard and was used to control the rotation of the MG958 servo. This servo was responsible for operating the lever on the pet feeder. It is a high torque model servo rated for 5.0V-6.5V. A 6.6V power supply rated at 2500maH was used to supply voltage to the servo. This allowed the maximum rated voltage to be supplied to the servo for maximum torque performance. The photon was used to send the pwm signal from pin D1 to determine the angle displacement and dwell time of the servo. The same power supply was used to power the photon. The current load needed to drive the servo was too high for the photon to handle. An LM317T voltage regulator was used reduce the voltage from 6.6V to 5V. A LM317T calculator from http://www.reuk.co.uk/wordpress/electric-circuit/lm317-voltage-calculator/ was used to determine the resistor combination required to drop the voltage to the desired output. Resistor 1 (R1) was 1,000 ohms and Resistor 2 (R2) was 3,000 ohms. This gave a theoretical voltage of 5.0V. The actual output voltage ended up being 5.4V. This was considered satisfactory because this output voltage was regulated to 3.3V after it reached the photon. The only component driven from the Vin pin was the PIR sensor which still operated with the 5.4V.

An LED was installed to aid in viewing the circuit while it was installed in the pet feeder. A string function called "showcase" was used to turn the LED on and off from the mobicle app. The onboard LED at pin D7 was also used as an indicator light when the motion sensor was triggered.

The servo for the pet feeder was mounted to the lower corner of the housing. A small linkage system was installed to move the lever that opened the feed trap. The servo mount was manufactured from a .750 inch thick clear acrylic. It was fastened to the feeder using two 1/4 - 28 socket head cap screws. The servo mount was custom designed for this application. A blueprint for the design is included below.

The same milling machine was used to clearance the housing for the wiring harness to the servo, PIR sensor and OLED display. Plexiglass panels were added to each side to contain the circuit and wiring for the feeder.

Things Speak was used to graph the activity of the motion sensor on the feeder. When the sensor was triggered it increased the number of the variable being sent to cloud. The graph is set to monitor the activity of the sensor over a span of 24 hours. This was published on public channel: https://thingspeak.com/channels/238034 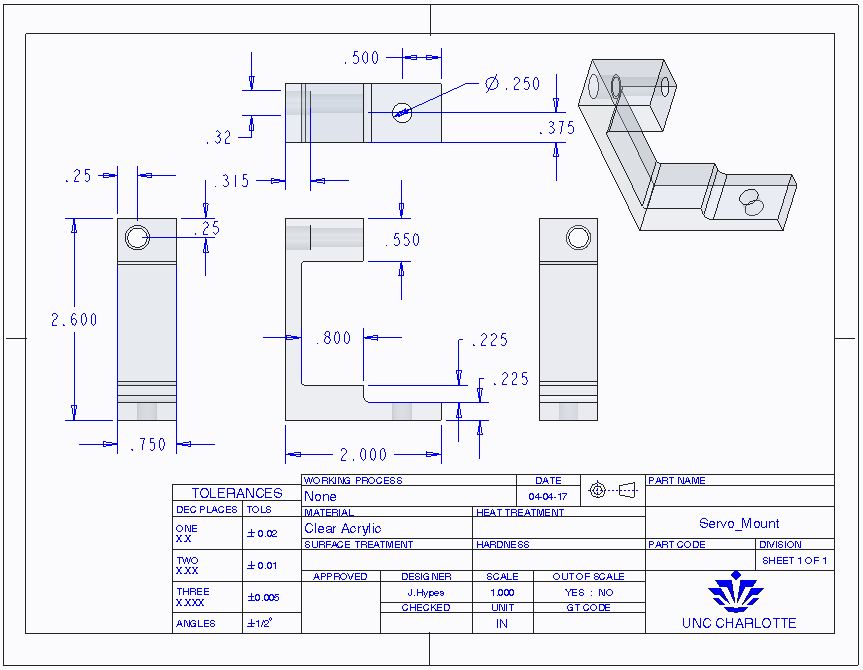 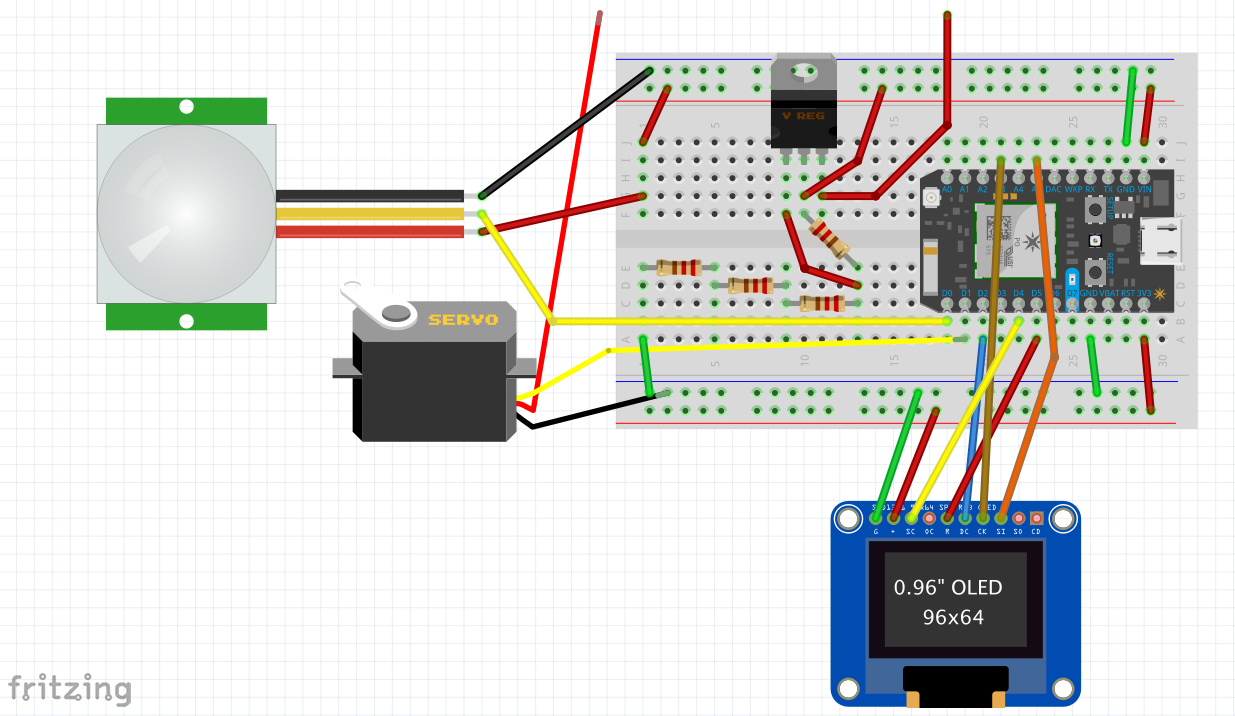 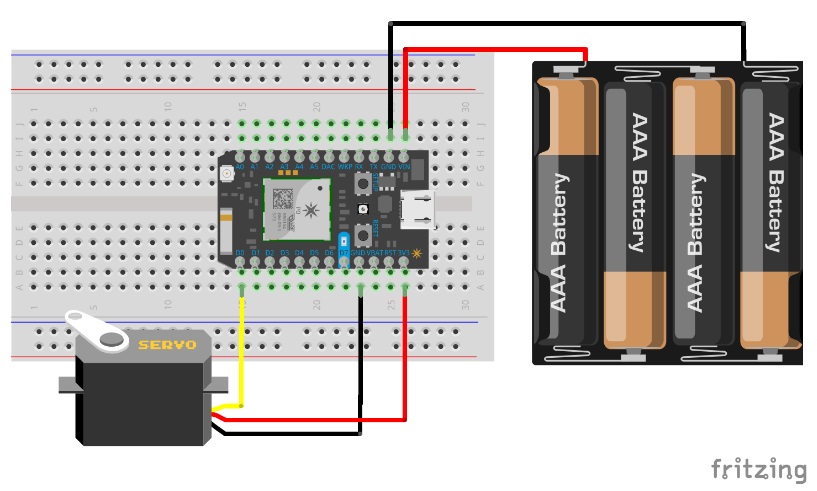