Do you ever just want to know if your pets have entered your room?

Do you ever just want to know if your pets have entered your room? 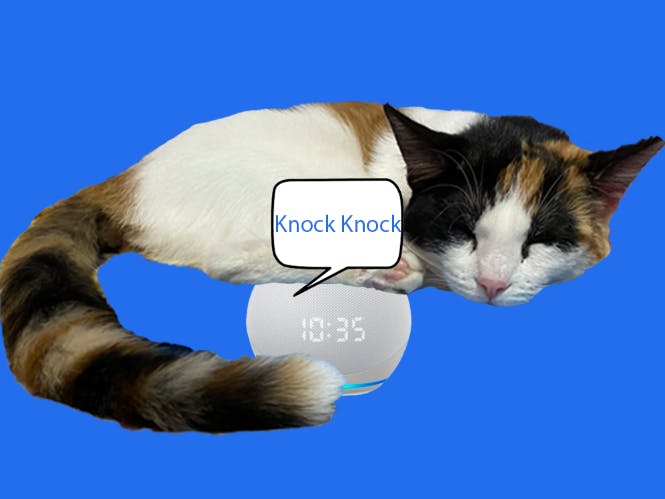 I decided to make this room notifier for my cat. When I would be at my desk and have my headphones on she would walk in and just jump on my chair and scare me since I couldn't hear her. This caused me to sometimes mess up on my work or even make me die when I am playing video games. (Happens more than one would think) I decided enough is enough and I wanted to change that. With this room notifier I am able to know when my cat walks in my room. With knowing this knowledge I am able to turn behind me to see where she is before she strikes. To hatch out my plan I first had to design where I wad going to put my motion sensor.

After I finished with the testing part I then decided to figure out how to send the signal of my motion sensor being activated to my Alexa. I decided to go with IFTTT as I saw this would be a good option. So I began with my "If this" and for that part I inserted Particle since I want to send a signal from my particle to my Alexa obviously. So for my "Then that" statement I go to search up Amazon Alexa and see that you are not able to put Alexa on the "Then that" but only on the "If this" section. I will admit I did panic a little but even though I didn't see Amazon Alexa in the "Then that" section I did see two other third party software that did the same thing that I wanted to do with the normal Alexa software. My first option was this software called MKzense so I decided to find it in my Alexa skills but I couldn't find it. I then decided to go with my second option which was voice monkey and I ended up finding it in my Alexa skills. I then began to setup my voice monkey account and to make Alexa to make an announcement or preform a routine I had to make a monkey.

With getting my monkey paired up I was now ready to set up my IFTTT tablet.

This IFTTT tablet makes it possible for my Argon to send a signal to Alexa once the motion sensor has detected motion. With this tablet Alexa is able to announce that "Someone has entered the room" To do this you would have to make a routine and select smart home and select whatever you called your monkey after that for the action you select to open voice monkey so it could make your announcement. Once I finished with the tablet I began to do test runs to see how it ran.

As you can see from the video we have many problems the first being that it doesn't receive the signal right away and the second being that I have to get a pro plan. Yea I felt pretty defeated after since I didn't want to get the pro plan and I didn't know how to fix the delay. But after looking at the Voice Monkey IFTTT tablets I was able to come to a solution of making VoiceMonkey run an Alexa routine. So I then made another Monkey (Not really necessary you just need to change the add action part of the routine and just make a normal announcement on the Alexa app) and with this Monkey I made another routine. With this routine I was able to announce directly from Alexa.

Once I was able to get the tablet I decided to test it again.

As you can see a delayed reaction and since the motion sensor gets activated more than once Alexa tries to announce it more than once also. For the delay I was thinking that it is probably my internet connection because in my room the connection is pretty bad. I wasn't able to figure out why Alexa was repeating herself though. Once I finished the testing and the researching I decided to move to the final stage which is testing it on Da Yukes (My cat).

First things first the only reason I said Oh Yea was because I was waiting quite a bit of time for her to walk in my room and she finally did. You can see I wasn't able to fix the delayed issue or repeating issue but in my books I would say it works to a satisfactory level because at least I get a heads-up(Even if its a little delayed).