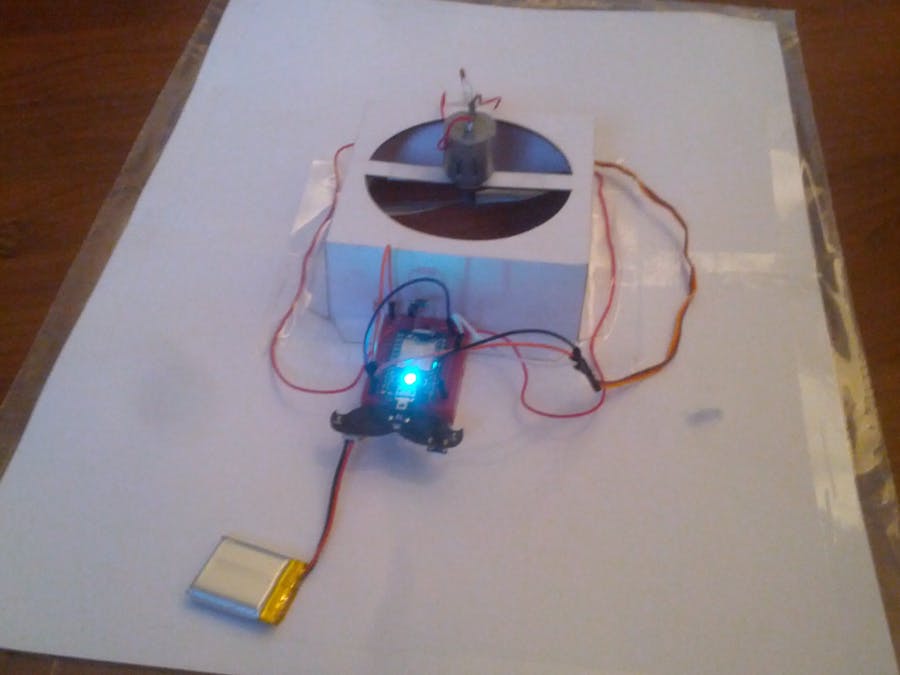 Being a chief tinkerer at CPC towers I get an opportunity to play with some really cool exciting products. One of the samples i had in was a DIY hovercraft kit from MindSets. This hovercraft kit is an education kit for children to learn an understand the engineering concepts of a hovercraft. After much cutting out an sellotaping the hovercraft was built.

The hovercraft comes with two battery holders for AA batteries and one which has a small slide switch on to turn the craft on and off. The motor mounted on the top spins the propeller and the hovercraft skirt fills with air.

Note: After tinkering I found it was better to have one side slightly weighted so it actually moves in a direction rather than just hovering. I taped a pencil to one of the sides to accomplish this.

Being a tinkerer I couldn’t resist expanding on what I had created and this got me thinking, what if I could control this from the web or using my smart phone?

Well luckily I had previously been playing with the Spark maker Kit from CPC. The pro’s on this is that the board is very lightweight, it is WiFi enabled, it uses Arduino style programming over the Spark Cloud and I could power everything from the Spark Core using the Battery Shield.

Firstly I removed the batteries attached to the motor and removed the wires to everything. I then soldered a 0.1uf capacitor to the motor (Included in the Spark Maker Kit)  for a smoother output. I also soldered some single core wire to either side of the of the motor, this enabled me to plug directly into the breadboard.

To switch the motors on and off or to control the speed I used a NPN transistor circuit with a diode across the motor to reduce any feedback when the motor is switched off. I wired up to micro breadboard using the following circuit diagram.

After wiring everything up i connected my Spark Core to the WiFi using the Tinker Android application and switched ‘D0′ pin on and off to test. I also used analog values to control the motor speed with success.

Some issues I’m currently having is when running at full speed or power the motors draws too much current resulting in the Spark Core resetting itself. I will look at increasing the LiPo battery capacity or running of standard AA separately. However i don’t want to add too much weight to the Hovercraft itself otherwise the air will not create a cushion.