An alarm clock that only turns off when it senses that the lights have been turned on, and automatically starts brewing coffee.

An alarm clock that only turns off when it senses that the lights have been turned on, and automatically starts brewing coffee. 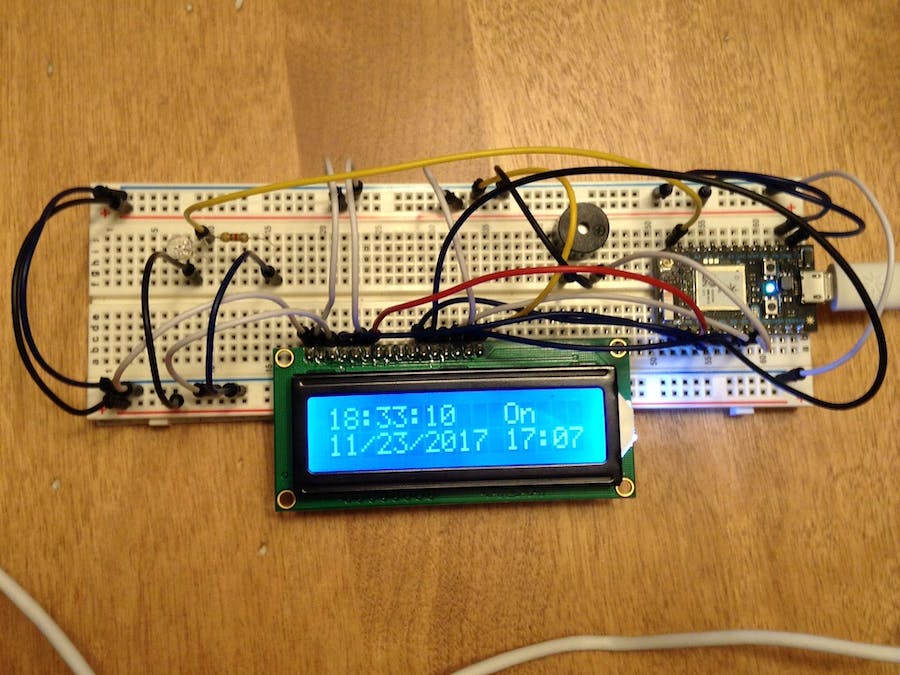 The LCD serves as the alarm clock. The time of the clock is controlled through the coding, while the time of the alarm is controlled through an IFTTT applet. When the alarm goes off, it keeps going off until the photo resistor senses that the lights have been turned on. Once the photo resistor senses that there is enough light, it signals the other particle photon to start moving the servo motor, which in turn starts brewing the coffee.

The servo motor is programmed to move just far enough until there is enough force to push the start button on the coffee maker. The servo motor then moves back to its original position. When the coffee is finished, the particle photon will send a text to your phone saying that your coffee is ready.

If This Then That Integration

The first IFTTT applet is used to turn the alarm clock on and off. If a push button was pressed, then the particle would call a function in its coding. The function would have a certain input, which the user can specify. The push button can be added to a users smartphone home screen for easy access to the alarm.

The third IFTTT applet created is how the two particle photons communicate with each other. If the variable "light" is greater than 6%, then the function "newPos" will be called. When that function is called, it takes the 30 as input and moves the servo motor that far.

1 / 3 • Applet allowing the two photons to communicate with each other.

The following images show the data that was sent to Google Sheets through the IFTTT app.

1 / 4 • Data received by photo resistor with a normal ceiling light, when it was covered, and with a flashlight directly above it.