We are going to be examining the frequency of bathroom pass usage for specific classrooms in the school.

We are going to be examining the frequency of bathroom pass usage for specific classrooms in the school. 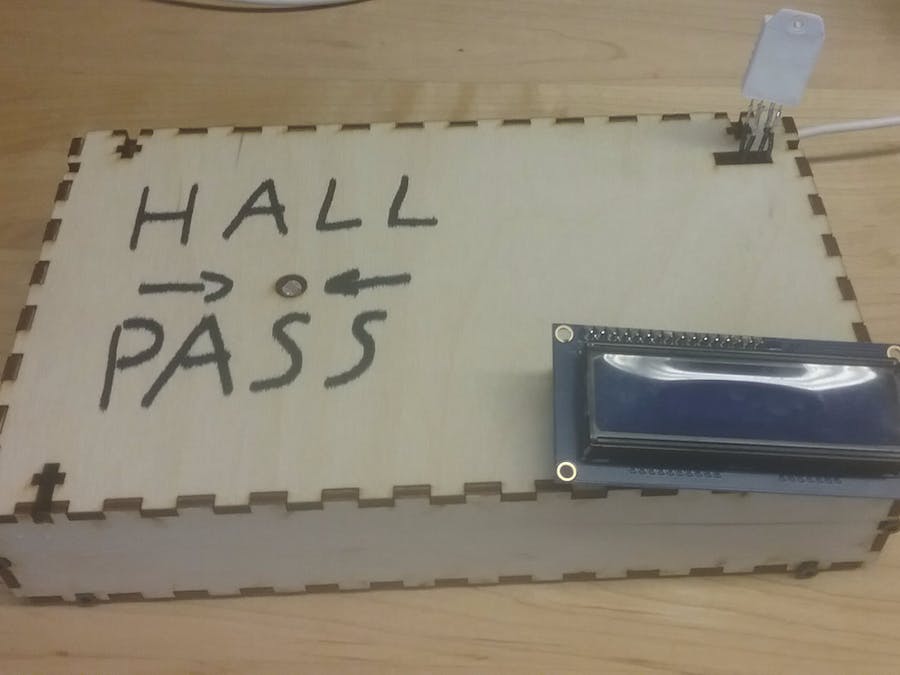 1 / 2 • This is the final design of the enclosure, completed with the photo resistor to the left, DHT 22 in the top right and the LCD is in the bottom right.

What question / phenomena are you considering? What are you interested in studying?

We are going to be examining the frequency of bathroom usage for specific classrooms in the school. We want to see whether there is a correlation between bathroom usage, temperature, time of day, and classroom type. The data we collect will be analyzed on the basis of whether certain conditions trigger higher frequencies in bathroom usage through the school day.

Rerouting the power of the LCD screen.

Where does this take place? Why is interesting to study / provoke / interact with this condition?

We have started scoping out classrooms to do this is. Our device would be collecting data every time the bathroom pass has been taken from its place in the classroom. Our device would supply a location for the pass to sit on, in order to collect data, and the data collection would take place every time the pass has been taken, which would act as a type of trigger for the device. Regarding the deployment of our device we need to decide whether or not our device would be moved daily from classroom to classroom or if it would stay in one classroom in order to collect data for a single classroom over the week of collection. The benefits to moving the mote daily would involve the ability to answer different questions regarding the data, including; if the teacher has an effect on the amount of students leaving the class, if classroom size has an effect, the floor might have an effect on the temperature, thus having an impact on the students, etc… However we realize that moving the sensor also creates many variables in our data collection, such as; if there is a different bell schedule one day, the teacher’s bathroom policy, etc… It would be interesting to see what factors impact the use of the classroom hall pass.

Enclosure after coming out of the laser cutter and placing the components through the top.

What is required to understand this? What type of information / data are you interested in? What sensors may be able to collect this type of data (alone or working together)? What other sources of information might you need (class schedules, access, etc)?

To understand the data we would be collecting we would need to be able to compare our data to the bell schedule. This would help us understand the time of day that the phenomena occurred and further our research into the causations of trends in the data. We are interested in finding trends throughout the day of bathroom usage that could be influenced from different sources. We are seeing if bathroom usage could be affected by the temperature, humidity, classroom size, teacher policy, time of day, time until lunch, etc… The sensors we are looking into would be a DHT and a photo resistor, since these sensors would allow us to collect information about the climate of the classroom, and have a reliable trigger for the bathroom pass tracking. The other source of data we would need would be information regarding the classroom itself that would need to be provided to us by the teacher.

Wiring shown under the top cover.

When is it critical that your device collects data?

Some of the data collected on Phant, after removing the photo resistor and the LCD screen. (Collected over two days.)

What are the obstacles that you anticipate (technological, collaboration, access, security, approval, etc)?

The biggest obstacle we anticipate facing would be student manipulation of our data through carelessness towards our project. Because our project would be a stationary device, this would require students to place the pass back in the location it came from, however high school students are sometimes incapable of this. We decided that we would ask the teacher to inform the students ahead of time and include a sign with the project reminding students to place it back where it was found.

SVG file, for the case plans.

What are you interested in creating as an output / product / display for your project?

1 / 3 • Graphed data of the temperature and humidity, after removing the photo resistor and the LCD screen.

What challenges did you encounter?

Our path to completion was riddled with plenty of challenges. First of which was deciding how to collect and store the data that we would be receiving from the device. We decided that we would then push to the Phant database, because the light values would need to be tracked by the second in order to return accurate values to be analyzed.

Our next obstacle was connecting all of the components to the PCB board. Because none of us had any prior knowledge of how to use a PCB board, we had to check our layout many times through. This seemed to be for naught, since the device did not work as intended regardless.

The biggest problem arose from the LCD screen. It seemed as though it were too lavish for our simple project, drawing too much power from the photon, and due to the immense amount of wiring for the screen there were faulty connections that were seemingly irreparable to us.

Redoing the connections to ground.

Where did you deploy?

We intended on deploying our device on the first floor in room 124, Mr. Hayes computer science room. This room is fairly large, with roughly 30 students in each class, we decided that this would be sufficient in providing us with the data that we would collect for this project.

Our project deployed on the desk by the doorway of the classroom.

How did you go about building and constructing your 'mote'?

It all started on the computer, constructing a working design online that we could replicate on a breadboard. In order to make sure that all of the components were properly set up on the PCB board prototyping was key.

Fritzing diagram of our breadboard.

After designing the structure that we would use online we started building the PCB board. Soldering all of the components into the previously decided locations on the board.

1 / 2 • PCB board with all of the components put into place, prepared to be soldered.

Before we had decided on the database that we would be using to record data for the project, we had prepared a test script for both Phant and Google spreadsheets. This would simply output values to the table from the photon in order to make sure that the device was working along with the databases' ability to collect and record data.

When we finally decided to use Phant as our primary database, we started making our primary code file, to be uploaded to the final device. Along with this file we had two test files, one to debug the database itself and one to work out any hardware issues.

When pushing the data from the photo resistor to the database we received a constant value of 255. This meant that although the component was wire correctly there was a loose soldering joint somewhere on the PCB board. We discovered that this error was between the photo resistor and the connection to ground.

When trying to output the data on the LCD screen it would output nonsense, in the form of different shapes, along with flickering on and off if the device was moved. We discovered that although the component was wired correctly it too had some faulty connections. This lead to the flickering of the screen and the random outputs.

This photograph highlights the faulty connections in the LCD screen that are responsible for the flickering of the screen.

What did you learn?

We learned a lot from this project, starting with; keeping our ideas simple. The major fault with our project was our ambition, using an LCD screen involved a lot of wiring and with minimal experience with this it would have been better to have chosen a more conservative approach regarding our choices of components.

We also learned that it is imperative that the connections that are made are SOLID. Loose connections are what effectively killed our project, teaching us that even the slightest mistake in the soldering job could cost us the entire project.

In a more positive light, we did learn how to push data to Phant. It is important when dealing with large amounts of data to store that information in a database, a skill that will be useful in the future.

We also learned how to use a PCB board. Making connections manually, outside of a breadboard, is important when creating circuits and is a helpful alternative in regards of saving space.