I tell my Amazon Alexa to dispense necessary items onto my palms when I ask for them.

I tell my Amazon Alexa to dispense necessary items onto my palms when I ask for them. 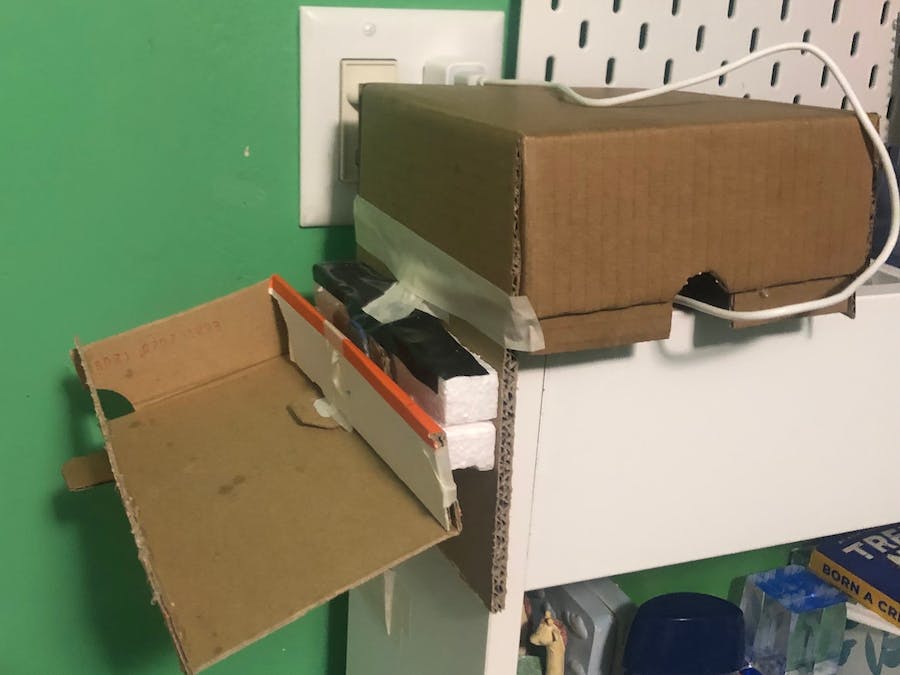 My project is a fairly simple idea: I wanted to make a 'dispenser' that could place items on my hand whenever I wanted to. It would also give me a place to put away some items that I would prefer not to lose, such as my school ID or some winter gloves.

Before I began with the engineering aspect of this project, my first step was connecting my particle argon to amazon Alexa. To do this, I used https://ifttt.com/explore. This website makes it really easy, all you have to do is make an 'applet' using a custom command to call a function ( more on the function part later). For example, I used "Alexa Trigger Dispenser" as my command. Only when I say that phrase, the dispenser will work, which is perfect for my project!

The function is located on line 13, "MichaelHA". That is what you put under into the applet. It should also ask for a function input, and to be quite honest, I'm not sure if you need that but just to be safe, I put "startStepper" on it, the same as in line 13. After that, you're set as far as connecting Alexa to your Argon.

A very important step is to add the stepper library to your code. On the particle web IDE, traverse to the left side of your screen, and hover over a rectangular shaped badge, with a triangle indentation at the bottom of it. Type 'stepper' on the search bar, and it should be the first option. Add it to your code, and it should appear on the first line as it does on the screenshot above in my code.

I found a really convenient place on my shelf to do this project on.

This was a perfect indentation because all I had to do was make a cardboard base that simply slides in.

I did not want to hot glue cardboard to a shelf, and neither should you (unless you really want to do that I guess). I measured out the width and height to make a stable cardboard base. No need to glue or tape anything, it should simply slide in if the measurements are precise enough. Here's how that looks:

This is the cardboard that slides in.

The next part took the longest time, because my design for the dispenser was flawed. Don't worry, everything up to this point should be ok. I wanted to use a long rectangular styrofoam block for the dispenser but this failed badly for a variety of reasons.

1 / 2 • For this, I planned to have the stepper motor go through the middle hole, and attach the toothpicks to the block, so when the stepper motor spins, it spins this cardboard piece, which moves the block down and up. On paper, this sounds good, but in practice, it was horrible.

As you can see the desperate attempts of poked holes, toothpicks, tape, anything I could come up to make my dispenser work, didn't. There was two major problems. The first was that you can't simply just stick the shaft of a stepper motor on styrofoam, it "gives way". So as the stepper motor turns, the styrofoam block loosens and loosens until it falls off. The next thing was the block might as well be a dispenser for ants; the dispenser couldn't hold anything. The most it could hold was maybe a mask (barely), but eventually, the block itself would fall off. So I had to improvise.

I had a shoe box. A shoe box, as the name implies, is naturally an open faced rectangular prism if you cut the cover off. I took full advantage of this, and I cut the box into what would be my dispenser. I also measured and cut out a barrier for one side. Here's what it looks like.

I realize this is hard to see, but both sides are taped to the shaft to the stepper motor to the side of the dispenser box.

By now, or probably before, you should test out the project. You can do this two ways: Using the skill you taught Alexa, or going to Particle IDE -> Console -> Devices -> (Your argon) -> Bottom right to where it says "call function".

WARNING: Do not overly test the limits of this dispenser. Slowly build up in weight. I started out with my school ID, then that with a pair of gloves, and then that with a mask. It could probably hold more but I don't dare to go further. After all, you're not going to put model plane on this thing.

If the dispenser can consistently hold items, drop them when turning, and not fall of the stepper motor, congrats! You're almost there.

I added one more thing to help the stability of the dispenser because it does lean at an angle. I really don't know how to describe it, but it's a little flap that goes underneath the dispenser. It's very important that this flap goes before the middle of the dispenser, otherwise it cannot physically turn down to drop your desired items. You'll see what I mean in a minute.

Here's the flap. I used cardboard for this. Bend the ends of the cardboard about an inch. One side should be fully taped.

For reference, this is how it's supposed to look like:

After this, test out the dispenser a few times, with items and without. If everything works, you're finished! Now this is optional, but I added a cardboard box over all my electronics. If you do this, just make sure you carve out a hole where you're mini-usb from your argon fit through and near a place with an outlet. Here's the finished product and voice and video.

Afewnotes: With this being a prototype, it's far from perfect. Here are some things that can be improved.