How to display messages on a remote screen? The project combines two technologies, e-paper screen and IoT, to solve this problem.

How to display messages on a remote screen? The project combines two technologies, e-paper screen and IoT, to solve this problem. 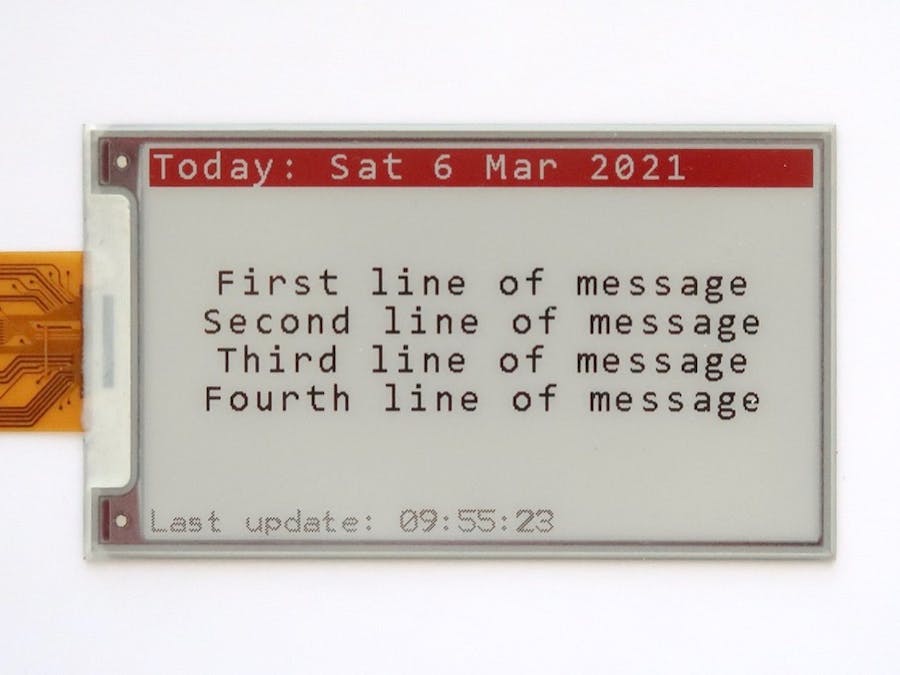 How to display messages on a remote screen? The project combines two technologies to solve this problem.

Pervasive Displays offers a wide range of e-paper screens, from 1.54" up to 12.2", in black-and-white or black-white-red versions, as well as the Pervasive Displays Extension Kit Gen 3, a universal driver board.

Apart from the low power and the persistent display, the e-paper screens offer high readability even in direct sunlight and high resolution with 130 dpi.

The e-paper screen requires an external frame-buffer, stored in SRAM. The size of the screen is thus limited by the SRAM available on the Particle Photon board: only ca. 50 kB are available out of the 128 kB, enough to support screens up to 4.2" with 400x300 pixels. The project here uses a 3.70" black-white-red screen.

The application relies on the Particle Device OS API for the cloud functions like authenticating, getting time, receiving and sending messages, posting variables.

Particle brings two options, the online Particle Web IDE and the offline Particle Workbench Extension for the Visual Studio Code IDE. The project uses the latter, but it should be the same with the former.

The ePaper EXT3 Basic Library provides high-level graphics and text routines with extended fonts, and includes all the hardwire-level management of the screen.

The lib folder should contain now two sub-folders: SparkJson and ePaper_EXT3_Basic_Library, and the src folder the PDI_EXT3_Messages_Particle.ino main sketch and EnglishCalendar.h header file.

The dashboard runs on Node-RED, a graphical programming tool to manage heterogeneous IoT hardware and software.

Now, the Particle nodes need to be configured.

Back to Node-RED, to set the publish node,

To set the variable node,

Back to Node-RED, the dashboard offers three panes: Send, Display and Trace.

The Send pane includes a form with two lines and other controls.

The Check pane retrieves the actual content of the remote e-paper screen and displays it below.

Pervasive Displays offer a wide range of screens, from 1.54" up to 12.2". Screens larger than 4.20" may require an external memory like SPI SRAM for the frame-buffer. However, the same Pervasive Displays e-Paper EPD Extension Kit Gen 3 drives them all.

A larger screen may require an external SPI SRAM for the frame-buffer.

Also related to memory, a non-volatile memory keeps a copy of the messages in case of an accidental power-cycling. The FRAM technology combines the speed of SRAM with the persistence of Flash, and provides an interesting option.

The Particle solutions offers interesting options like fleet management for multiple remote screens and low-power mode for battery operation. Similarly, the Particle Console or even the Particule Cloud API with webhooks allow to operate the remote screen without the need of Node-RED.

The WiFi radio is power-hungry and obliterates the low-power capabilities of the e-paper screen. So changing for a radio like Bluetooth or sub-1 GHz would enable a year-long autonomy with standard batteries.

Here is an example of a more advanced version. It includes different options mentioned earlier, like:

The nice case fits perfectly in the living room! 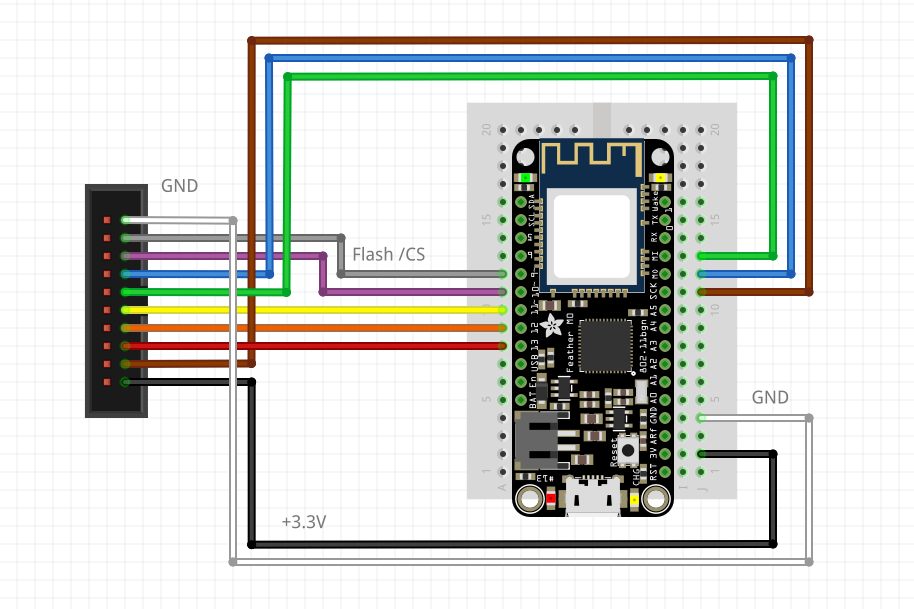