When you are practicing for your next long range competition use the blind spotter and you will never miss the impact again.

When you are practicing for your next long range competition use the blind spotter and you will never miss the impact again. 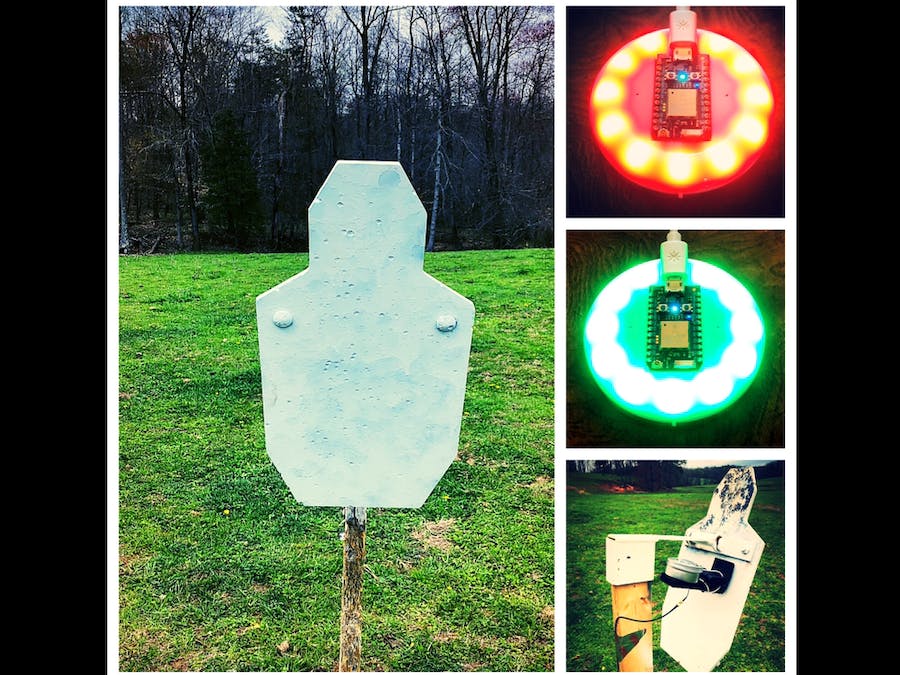 When shooting long range it is very important to have a spotter. The spotter is able to tell you many important things, but one of the most valuable is if you hit your target. Many times when shooting, the recoil of the firearm will prevent you from seeing the impact of your round. This makes it extremely hard to practice on your on. Also if you are a competition shooter many of the competitions have a time limit that the target must be hit within. If you go over that allotted time to make the shot then you will be disqualified. When practicing, trying to spot your own impacts, run a stop watch, and shoot can be very cumbersome. These are the problems that my team mate and I set out to fix with things you can buy on amazon for less than 100 dollars. The Blind Spotter is a two piece system that notifies the shooter if they hit their target or not with a red or green LED display. The half that attaches to the target is an accelerometer that attaches to the back of any steel target that is larger than 1 foot square. The other half is the display located next to the shooter. If the sensor on the target detects a sharp acceleration it will communicate with the display turning it green letting the shooter know that they hit the target. If the sensor doesn't detect a sharp acceleration then it will communicate with the display turning it red. This lets the shooter know that they either missed there target, or failed to hit it within their desired time limit.

Above is the sensor attached to the back side of the target. This is done with the strong magnet found in the parts list. The magnet allows the sensor to easily be attachable to any steel target. If the target is impacted, the swinging motion of the target will trigger the internet button's accelerometer sensor. This will publish a "Hit" turning the other internet button located next to the shooter, green. If there is no acceleration of the target detected with in the allotted time, programmable by the user, then the particle will publish a "Miss" and turn the shooters display red.

Set up of the Target and Antenna
Directional High Gain Antenna

Above in the first picture is the set up of the equipment on the target side. Below the first picture is a picture of the directional high gain WiFi antenna. This antenna allows the target to be placed at longer distances. Just as a rule of thumb, for every 6 dB of gain on the WiFi antenna the allowable distance of the signal will double. The antenna above is a 20 dB directional antenna which allowed us to double each incremental distance 3 times. Unfortunately, where the initial distance of the internet signal was so small it only allowed us to reach 250 meters in this demonstration.

System is Armed and Waiting for Response

Target has been hit

If the display turns green, the shooter can hit the same button (located at 6 o'clock) and reset the internet button on the target and also the display beside him or her. Once the button is pressed it will start an internal timer that is programmed by the shooter. At the end of the time, if no motion was detected, the particle located on the back of the target will publish an event called "Miss". Once this event is published the particle located beside the shooter will subscribe to this event and turn all the LED's red. This will let the shooter know that no motion has been detected and that he/she has missed.

Target has been missed or shooter has ran out of time

Above is the top view of the internet button. As you can see the white squares at the outside circumference of the internet button is the LED's used in the project. Also to the right of the number 9 LED is the orientation of the accelerometer. The "y" axis was the only axis used in this experiment. Just above the number 6 LED on the Particle board, is the internal antenna seen as the white ceramic rectangle.

Above is the picture of the bottom side of the internet button. The 6 o'clock button that was referenced in the demonstration video above was used to reset the sensor. This button in this schematic is labeled as button 3. This was the only programmed button used in the shooter display.